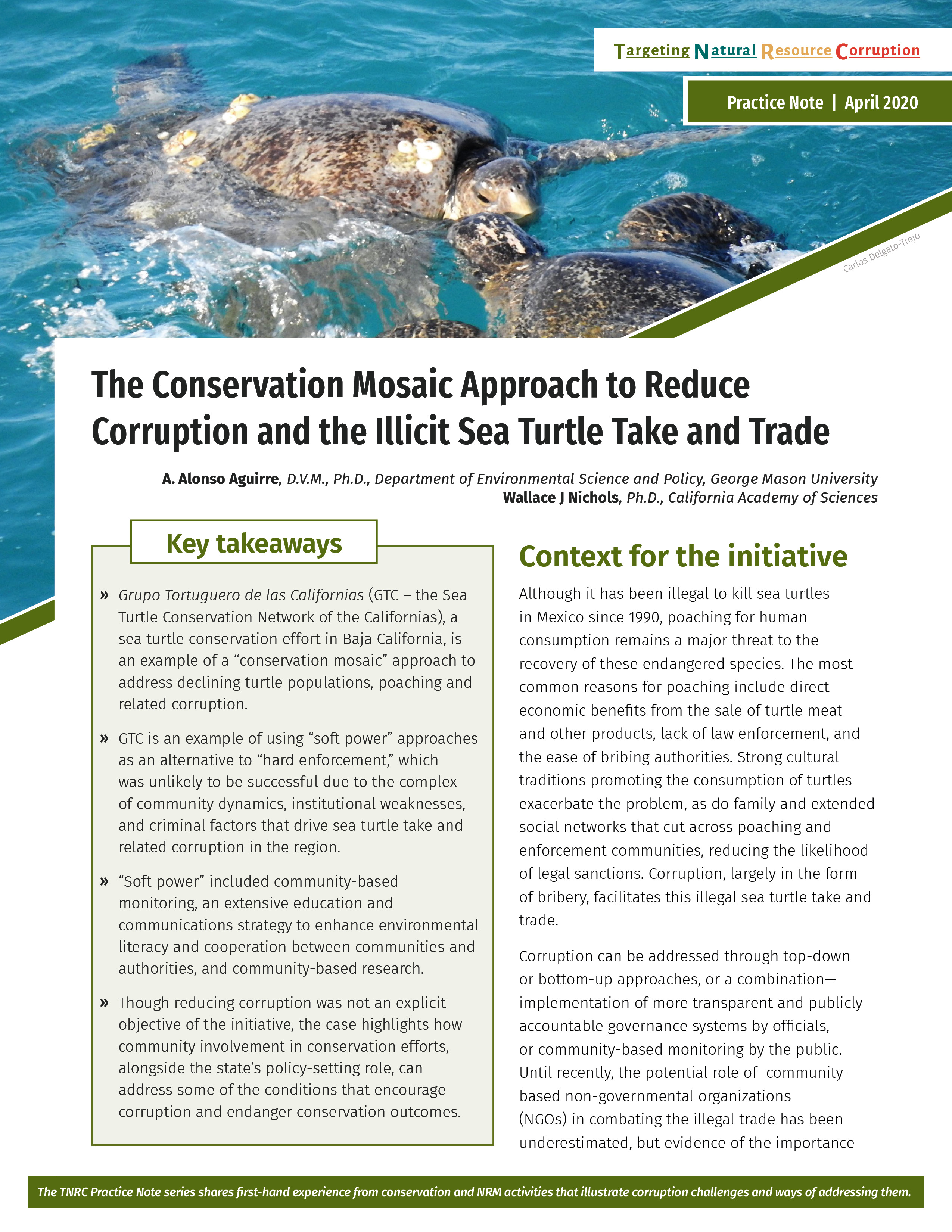 Context for the initiative

Although it has been illegal to kill sea turtles in Mexico since 1990, poaching for human consumption remains a major threat to the recovery of these endangered species. The most common reasons for poaching include direct economic benefits from the sale of turtle meat and other products, lack of law enforcement, and the ease of bribing authorities. Strong cultural traditions promoting the consumption of turtles exacerbate the problem, as do family and extended social networks that cut across poaching and enforcement communities, reducing the likelihood of legal sanctions. Corruption, largely in the form of bribery, facilitates this illegal sea turtle take and trade.

Corruption can be addressed through top-down or bottom-up approaches, or a combination—implementation of more transparent and publicly accountable governance systems by officials, or community-based monitoring by the public. Until recently, the potential role of community-based non-governmental organizations (NGOs) in combating the illegal trade has been underestimated, but evidence of the importance of bottom-up initiatives is growing. For example, a study found that NGOs that targeted conservation and animal welfare decreased the illegal pet trade in Peru despite the government lax enforcement of wildlife legistation (Daut et al. 2015). Grupo Tortuguero de las Californias—Sea Turtle Network of the Californias—demonstrates how illicit wildlife trafficking and related corruption, even when it is deeply ingrained, can be addressed through a community-based approach.

The waters around the Baja California peninsula, including the Gulf of California, are considered the most important fishing zones in Mexico. They also contain critical feeding and nursery grounds for five species of sea turtles officially endangered or threatened, including black, loggerhead, hawksbill, olive ridley and leatherback turtles. The black turtle (Chelonia mydas agassizii), tortuga prieta in Spanish, is the most common species and historically the most important animal native to the region, as it plays a central ecological, cultural, and economical role.

Fisheries data indicate that black turtles were abundant and the target of a lucrative industry well into the 1960s. However, by the 1970s, the species experienced sharp population declines. By the mid-1980s, most reports indicate black turtles reached an all-time low, with a steady recovery since 2000. Sea turtles face loss of nesting beaches, egg poaching, loss of feeding habitat, hunting of juveniles and adults, and entanglement in fishing gear.

The main threat to black turtles in the Baja California region is directed take and local consumption. Alarming mortality rates linked to incidental capture of 10-20 percent on sea turtles tagged between 1994 and 1999 were reported. A minimum of one black turtle per week, on average, was consumed in each coastal community where surveys were conducted in the past. In some communities the number was far greater. There are more than 150 permanent, coastal communities along the Baja California peninsula, of varying sizes. At this conservative estimated level of take, it is likely that the minimum mortality rate due to local consumption of black turtles in the Baja California region was at least 7,800 per year. When black market trade in urban, mainland and inland communities is included in this estimate, mortality was calculated as high as 30,000 turtles annually (Garcia-Martinez and Nichols 2000; Nichols 2003; Mancini et al. 2011). This take impacted both immature and mature animals and likely has resulted in the decline in the number of nesting females on eastern Pacific rookeries. Boat collisions, ingestion of plastic debris, and contamination were identified as further, moderate, threats to black turtles.

Many of the turtles captured accidentally or directly enter the black market, are traded locally, or consumed domestically. All of these activities are related to corrupt actions by fishers and consumers, including high government officials and law enforcement authorities. At the root of this mortality are several factors, some of which relate to poor enforcement of conservation laws faced by many developing countries, as well as gaps in knowledge and resources. Sorting out the impact of corruption on sea turtle conservation efforts therefore requires identifying corrupt practices as well as conditions that may encourage or discourage such practices.

At one end of the spectrum, local residents and fishers lacked important knowledge, which might have made them more likely to break laws:

Once they are involved in illegal activity, knowingly or unknowingly, fishers and traders are more vulnerable to extortion by law enforcement authorities, or they may simply be more willing to pay bribes to smooth out any problems that may arise due to the illegal activity.

At the other end of the spectrum, authorities failed to enforce laws for a number of reasons that help explain how corruption can become embedded in the system:

In condititions like these—with local fishers and enforcement officers easily becoming involved in larger dynamics of criminality and/or political power—it is easy to see how corruption can become ingrained. Fishers reported that bribery was an alternative to large fines or incarceration when they were caught with contraband. Sea turtle conservation in Baja California became essentially taboo due to these layers of illegality, corruption, impunity, and intertwining with the narco-industry. The big NGOs wouldn’t touch the topic, and funders said it was too late to protect sea turtles.

In response to sea turtle declines and mortality information, GTC was established in 1998, beginning a tradition of yearly meetings. By 2006, the gathering had grown from its founding group of 45 fishers, coastal residents, scientists, educators and conservationists to the current international network linking 500 members from more than 53 coastal communities, dozens of non-profit organizations and numerous government agencies and research institutes from Cuba, Japan and Mexico. All share the same goal: the recovery of sea turtle populations.

These annual meetings allow members to present results of research and monitoring projects and communication and outreach programs, and to attend hands-on training workshops. Most importantly, conservation strategies are debated and developed, and critical personal relationships are formed and renewed. Each GTC member community has given rise to many sea turtle and non-sea turtle conservation, education and advocacy projects. The group provides monitoring and transparency by sharing data from the feeding grounds with the Marine Geospatial Ecology Lab’s Migratory Connectivity in the Ocean (MiCO) Initiative (https://mico.eco), an online mapping of species being satellite tracked or flipper tagged. Also, GTC established a system where turtle stranding data are constantly shared with local authorities like PROFEPA.

Illegal trafficking and related corruption have been a target of GTC’s work, implicitly if not explicitly. Rather than focus on hard enforcement strategies, which would have been nearly impossible (if not deadly) given the combination of traditional use, black market trafficking, corruption and linkages to the narco-industry, GTC focused on “soft-power” approaches through a “conservation mosaic” strategy (Nichols 2006). This approach (Figure 1) highlights the importance of community involvement, but acknowledges the role of the state to set policy agendas, with three interrelated components: 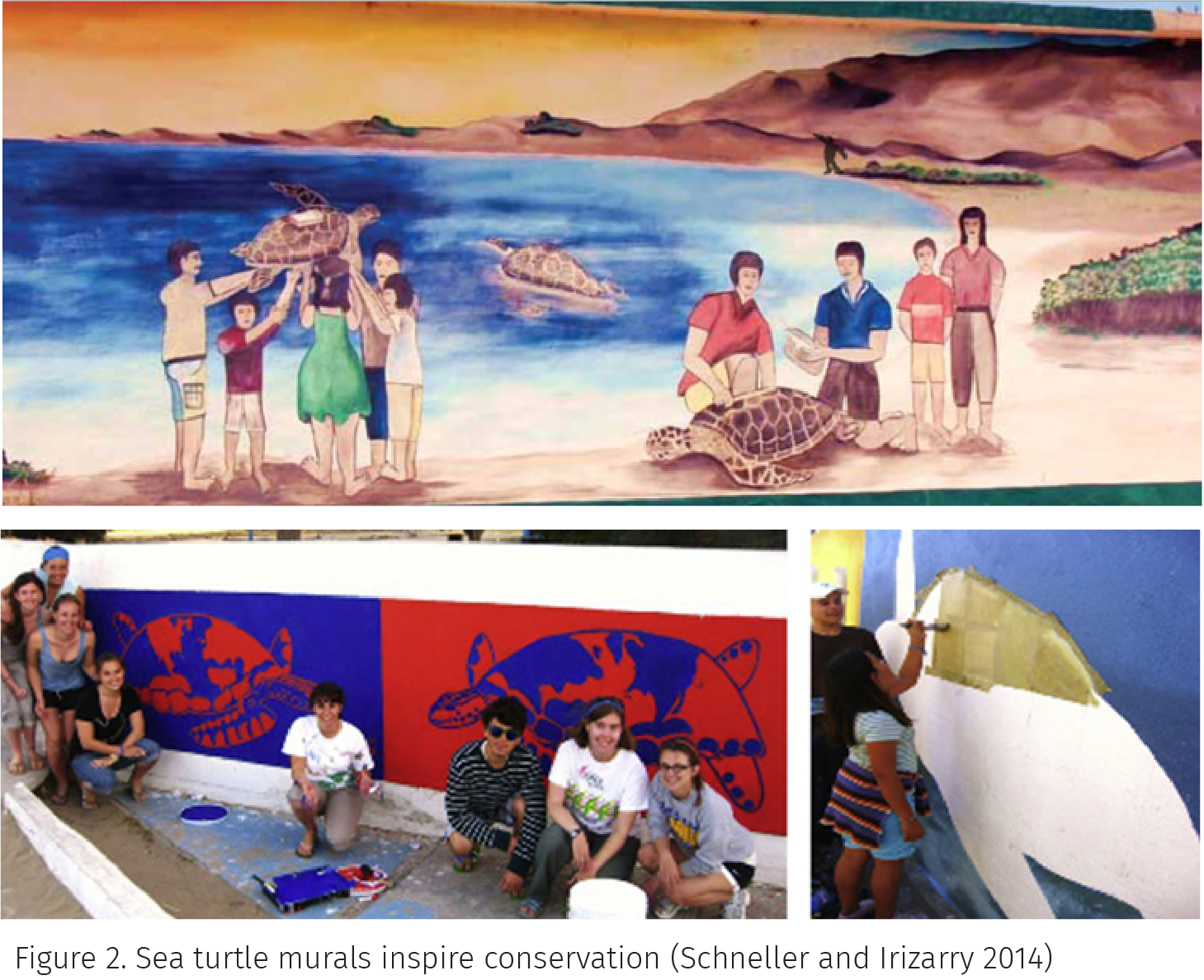 Keys for Success: Education and Monitoring

GTC launched a robust movement to enhance environmental literacy in the region. Murals painted by local artists, non-governmental organizations, and school groups, depicting sea turtles in a variety of scenes (Figure 2), helped to shape pro-environmental attitudes and behaviors toward the treatment and recovery of endangered sea turtles and stewardship of marine ecosystems.1 These murals were part of a holistic outreach campaign by GTC as a unifying NGO in the state. Ongoing education and outreach initiatives include workshops for fisherfolk, environmental education for schoolchildren, regional sea turtle festivals, innovative community-based social marketing comic books, and radio programming, along with the murals. Environmental murals have also provided a means by which communities have public access to information about the marine environment. Stimulating community pride in a local species is also at the core of other organizations. (See, for example, https://rare.org/.)

Community monitoring initiatives like GTC are central to sustainable collective governance and conservation of species and ecosystems (Ostrom 1990). GTC shared data in real time, empowered fishers to analyze and present findings at conferences, and developed deep, trusted relationships with the media, who considered GTC members “honest brokers.” Monitoring data demonstrates the recovery of black turtles; however, it is still too early to ease up on conservation efforts as other turtle populations have not recovered.

Enforcement and scientific agencies had long resisted civic involvement, but their inability to conduct scientific monitoring and protect sea turtles due to lack of funds and staff helped pave the way for a more collaborative approach. PROFEPA maintained only 12 agents dedicated to environmental law enforcement for over 1,000 miles of coastline encompassing both the Pacific and gulf coasts. In response, groups related to GTC were given authority to monitor sea turtle bycatch in several remote areas.

An additional component that fueled success was to always give credit, rather than take it. In essence, GTC endeavored to create a parallel conservation apparatus using new rules in order to remain outside the “stuck” ways of a corrupt system. This meant that certain professional sacrifices were made; for example, by scientists changing their research from science to advocacy; by fishermen, leaving a traditional way of life for generations, from fishing to sea turtle conservation. Credit was given to other NGOs that later claimed to have developed the local efforts. In addition, funders sometimes were not interested in this experiment or considered it a waste of money, and academics found it “unscientific.” It is worth mentioning that the data from GTC have been used in 234 theses, scientific articles, reports, presentations, posters, and book chapters.

Many of these approaches, which were initially deemed “inappropriate,” have become the new normal, including participatory research and monitoring, data sharing, and smart media communications. When the goal is to build a diverse and unstoppable “movement,” the strategy is very different from the approach to building an organization, campaign, project, academic reputation, brand, foundation or government agency.

Because reducing corruption was not an explicit initial objective of the GTC initiative, data on experiences or perceptions of corruption was not initially collected, so it not possible to “prove” that corruption in management of sea turtle conservation has declined due to GTC’s activities. However, GTC’s ongoing work has produced a number of changes that address conditions that encouraged corruption (Table 1). 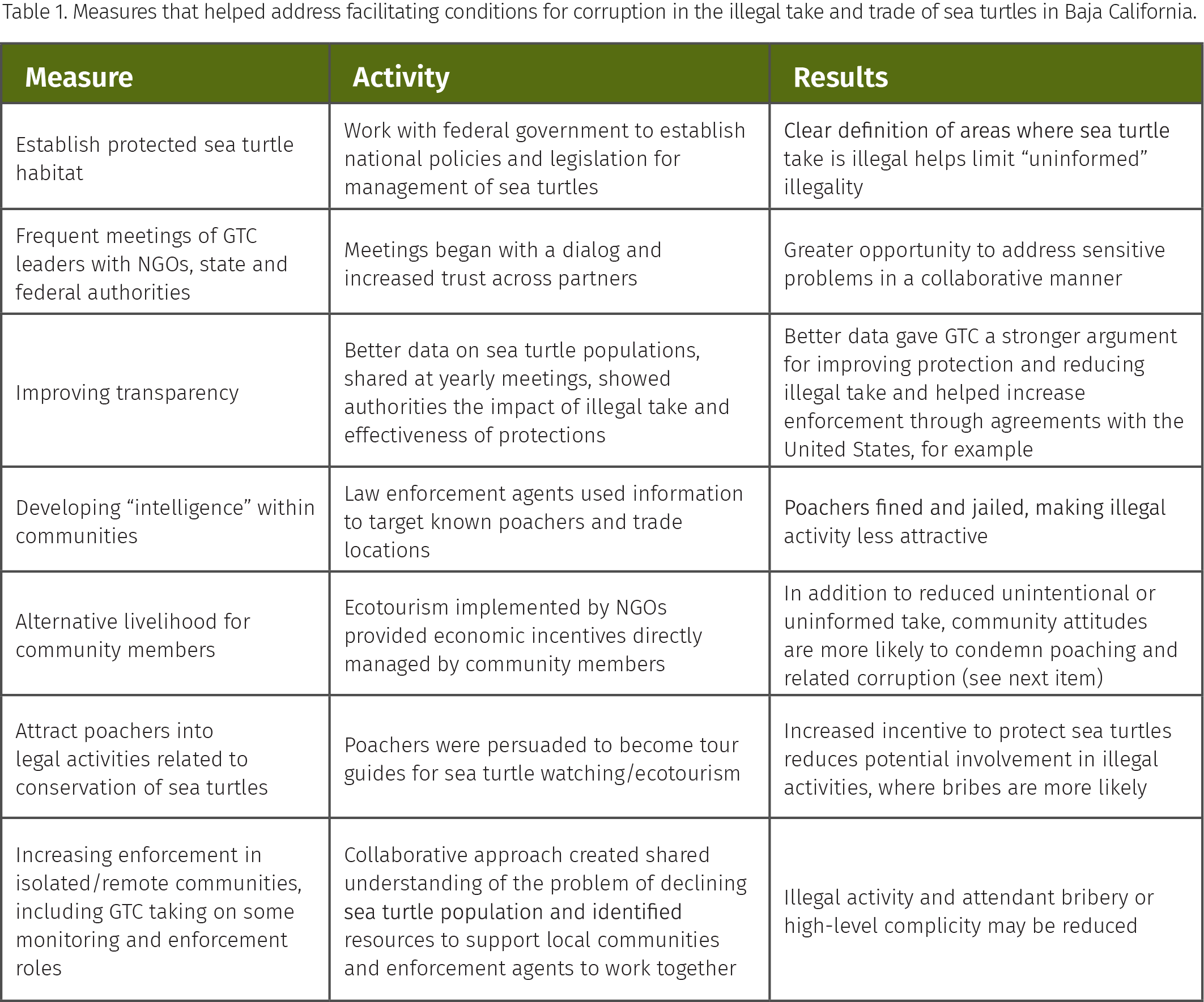 This practice note highlights several areas where considerable progress remains to be made towards reducing corruption and the take and trade of sea turtles and their recovery in the region. In addition to the “keys to success” outlined above, the following lessons and recommendations may help guide future community-based natural resource management (CBNRM) efforts that have identified corruption as an obstacle.

A. Alonso Aguirre, originally from Bahia Asuncion, Baja California Sur, Mexico and a family of fishers, has studied sea turtles for over 30 years in the region. He implemented the first sea turtle health assessment protocols in the peninsula to address massive stranding events that began in 2003, and he has trained many of the members of GTC on sea turtle health and diseases. He has extensively published on sea turtle ecology, conservation medicine, and the human health risks associated with their consumption. Dr. Aguirre has advised governments of many countries in the Americas, Southeast Asia and Western Europe and provided briefings to the legislatures of the Unites States and Mexico.

Wallace J. Nichols was a cofounder of GTC, holding the first meeting in 1999. He also co-founded Ocean Revolution, a global network of indigenous youth ocean advocates and scientists. His research, expeditions, and work as a guide have taken him all over the world where he continually finds that emotional connection to water. He serves as an advisor to numerous non-profit boards and committees as part of his commitment to building a more creative, stronger, progressive, and connected environmental community.

The TNRC Practice Note series shares first-hand experience from conservation and NRM activities that illustrate corruption challenges and ways of addressing them.

1 According to 333 surveys of adult and young participants in nine communities in Baja California Sur.

Pesenti, C. 2002. The 4th Annual Meeting of the Sea Turtle Conservation Network of the Californias. The Journal of Environment & Development, 11:179–183.