← Back to the TNRC Blog

This blog post captures key learning from a December 2019 TNRC Learning Series webinar by Gayle Burgess. Gayle is a behavior change expert with over 20 years’ experience across sustainable development and biodiversity conservation themes. She is based at TRAFFIC where she leads a portfolio of work using social and behavior change communications to combat illegal wildlife trade and to promote more sustainable wildlife trade.

The TNRC project recently hosted a Learning Series webinar where a simple framework was introduced for non-specialists to address corrupt behaviors that may undermine conservation and natural resource management (NRM) outcomes. A recording of the webinar is above. Outlined here are the framework presented, and some concrete examples of what employing this approach can look like, in practice. Focus is given to answering three learning questions: (1) What is a behavior change approach to tackling natural resource corruption?; (2) Which aspects of a behavior change approach can non-specialists easily apply?; and (3) Where can I find out more and receive guidance or support to get started?

What is a behavior change approach to tackling natural resource corruption?

Corruption undermines real and rapid progress across a range of conservation and natural resource protection priorities. In recent years there has been an encouraging increase in policy attention, corporate leadership and civil society action to tackle this, focused primarily on punitive measures such as stringent legislative deterrents and robust enforcement action, alongside calls for transparency and exposure of offenders. Research evidence from fields such as international development, however, demonstrates the value of a more holistic approach, one that also employs motivational measures such as those grounded in the behavioral sciences. The use of psychological insight and communications to shift social norms are amongst some of the approaches that can help to ‘shift the needle’ on corruption.

A behavior change approach to tackling natural resource corruption is one that uses cognitive, psychological and social science research, insight, evidence and approaches to influence the motivations, attitudes, values and actions of those engaged in corrupt practices. The objective is to change undesirable behavior so that it becomes less corrosive for the public good.

Which aspects of a behavior change approach can non-specialists easily apply?

The INTEGRITY Framework for changing corrupt behaviors that is introduced in this webinar and blog is a mnemonic or memory aid to help ensure that conservation and NRM practitioners consider a behavior change component when designing their projects. This Framework can be applied to any form of corruption, from petty to grand corruption amongst individuals or institutions, and to forms such as bribery, extortion, cronyism, nepotism, parochialism, patronage, influence peddling, graft or embezzlement.

The foundation for any behavior change approach is appropriate insight into the cognitive, psychological and social factors influencing the choices that people make and the actions they undertake Insight can be gathered through research processes involving opinion and observation-based primary data, as well as that gained through secondary sources. In simple terms, this data reveals the ‘why’ of corrupt practice, within a context of understanding what, how, where and when. Pinning down the psycho-social drivers and motivators for such behavior is crucial in complementing a grasp of socio-economic and demographic signifiers. The Organisation of Economic Cooperation and Development (OECD) has an extensive resource bank summarising behavioral insight relevant to various policy areas. The synthesis of insight specifically relating to public integrity is illustrated by Figure 1 below. 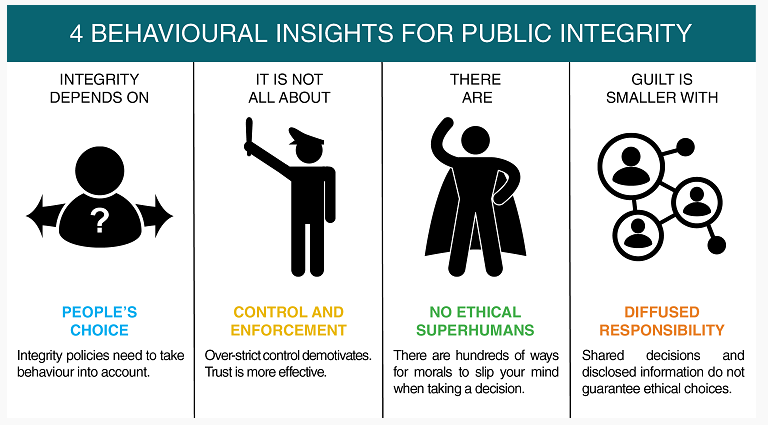 One example of how insight can be useful is the USAID study on ‘Changing Corrupt Behaviours in Ukraine’. Within a broader context analysis, semi-structured interviews and citizen focus groups were conducted to shed light on why parents were giving money to local primary and secondary schools. The parents did not see that they were paying a bribe to ensure their child’s education, rather providing a donation to ensure that adequate stationary, books and other equipment was provided, and to supplement teachers’ poor salaries. Understanding this background enabled those designing anti-corruption interventions to select messaging that encouraged parents to see their child’s education as a public entitlement, rather than a benefit for which they should expect to pay a bribe.

A foundation for any behavior change intervention is specificity around the behavior to change and the audience to target. You may choose to influence the giver rather than receiver of a bribe, for example, and to do this with those just starting out on this practice and therefore with a more malleable attitude, rather than those who have established habits and exhibit greater ‘stickiness’ or resistance to change. Diagnostic tools to support non-specialists in identifying the point at which to intervene include a context analysis or ‘systems map’ (per Figure 2 below). This analysis may be designed to demonstrate the intrinsic (engaging in a behavior for its own reward, e.g. because it conforms to somebody’s moral code) and extrinsic (engaging in a behavior for some external reward, e.g. for social stature or acceptance in a peer or reference group, or for financial reward) motivators, enablers and inhibitors of a corrupt practice, at any one point in time. A ‘behavioral journey map’ can build on this demonstration, by considering the evolution over time of the corrupt behavior. Used together, these tools can identify those most willing and able actors, as well as where and when to influence them. 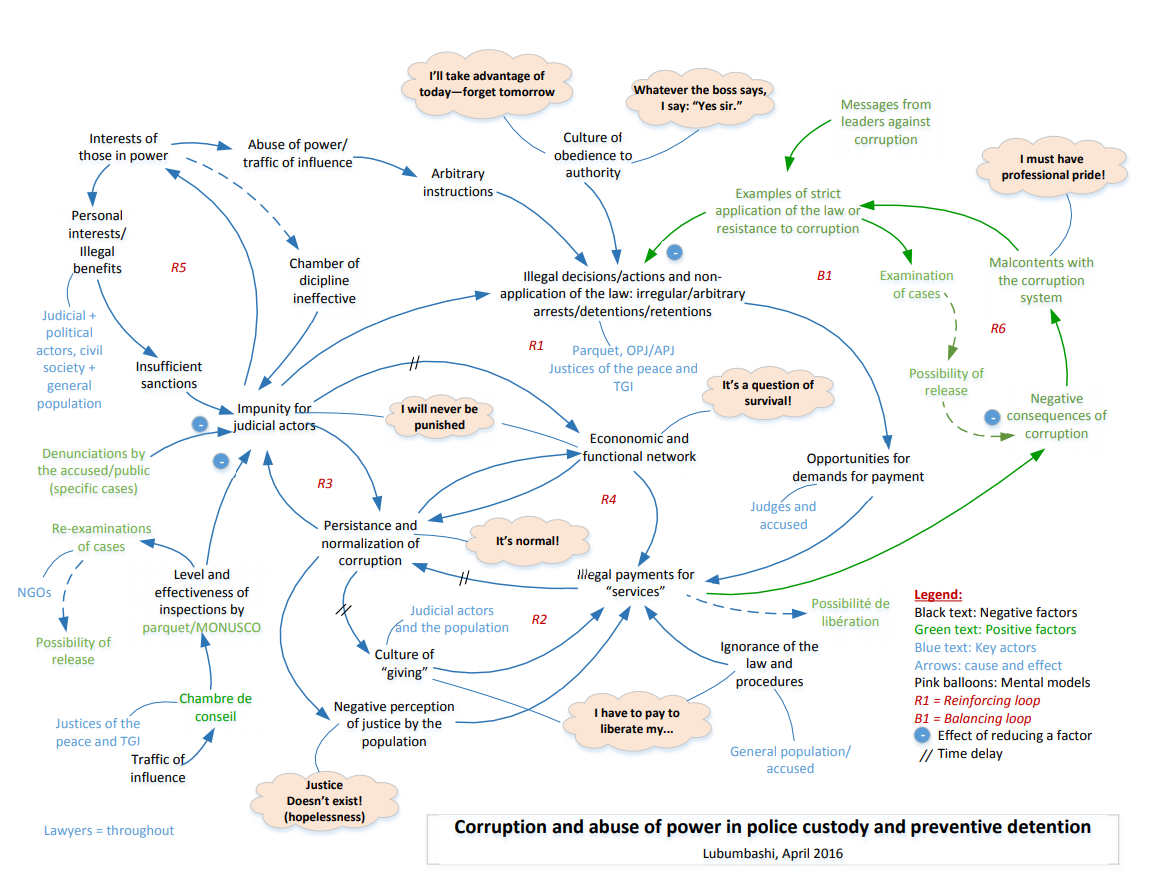 There are hundreds of behavioral theories and models that can be used both as diagnostic tools and predictors of change in practice and actions. Many behavioral models and theories of change are easily accessible to non-specialists. One of the most overarching is the ‘Socio-ecological Model’ (which considers the influences at the personal, social, community and environmental levels, on the way that a person thinks and acts.) The Communication for Change program has employed this model as a foundation for mapping others (see example here). The [UK] Government Social Research (GSR) ‘Reference Report’ by Andrew Darnton (2008) also presents a succinct summary of some of the most useful theories and models. Beyond this, there are common principles about the quality, tone and frame of especially persuasive messaging, as well as the character and personality traits of impactful messengers per the Good Practice Guidelines. More information about all can be found at: www.changewildlifeconsumers.org.

Designing communications that engage and enable people to act is key. Communications that identify small, specific, manageable actions as a first step are typically more effective in encouraging the initial behavior change. For example, encouraging passengers to speak up in cars where the driver is asked to pay a bribe at road checkpoints in particular hot-spot areas; inviting new starters in the police force to sign a Code of Integrity and discuss with their colleagues how they will help protect rather than exploit the people they serve; and persuading consumers to buy ‘permit assured/ corruption free’ certified timber and fish, are all more tangible and easy to undertake, than expansive appeals for all to ‘reject bribes, graft and embezzlement’.

Appealing to a mix of emotion as well as logic is also recommended, as is celebrating the positives of the desired behavior and removing barriers to uptake, whilst not over-emphasizing negative factors associated with the bad behavior such as fear, guilt and shame. For example, rather than issuing campaign messaging that invokes public resentment at the injustice of grand or State-wide corruption, encourage mid-level executives in State-owned infrastructural development or mineral extraction companies to champion more transparent and legally robust practice as part of a wider move within the business of increasing innovation, improving performance, enhancing the brand image and attracting more international clients.

Social norms have significant influence both for and against corrupt practice. U4 identifies sociability, kinship, vertical and horizontal pressures as relevant and identify a range of strategies to address these. Group actions can either help to facilitate or prevent corrupt acts, thus it is key that message-choice and framing either challenge or reinforce this. Avoiding language that implies that corruption is widespread across society or tolerated by many, is fundamental yet often overlooked. The power of people to mobilize action is an important corollary. As the 2019 ‘Global Corruption Barometer’ demonstrates, while three-quarters of survey respondents agreed that ordinary citizens can make a difference in the fight against corruption, almost the same number believed that there would be retaliation for those who report it. This demonstrates the clear disconnect between what people perceive a group can achieve, and what individuals within that group are prepared to do to achieve it. Issuing credible communications that reassure individuals that their actions can make a difference without consequences is critical in this manner.

Behavioral science emphasizes the importance of recognizing and rewarding good behavior to ensure that change becomes enduring, rather than subject to relapse before ‘retention and refinement’. Care should of course be taken to ensure that the reward is appropriate; for example, a fiscal incentive for not participating in graft is counter-productive, but celebrating ‘integrity icons’ (such as the Nepal example here) can be influential in ensuring that those individuals continue the change as well as inspire others around them to do so.

Efforts to change behavior should be part of a holistic intervention mix, balancing motivational messaging and legislation, enforcement and other context dependent control measures. A robust ‘context analysis’ can be undertaken to map out how behavioral change initiatives complement these others being undertaken to tackle natural resource corruption. Additional strategies that can be brought to bear focused on shaping motivation are illustrated below (see Figure 3). 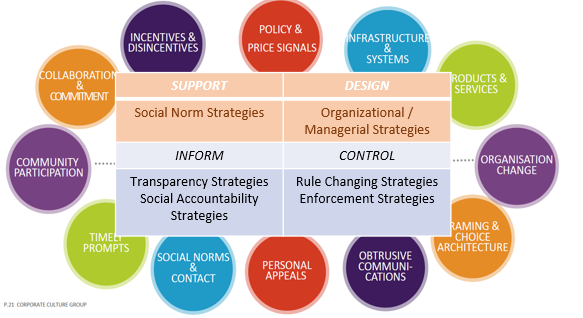 Figure 3: Summary of Potential Strategies to Consider in an Anti-Corruption Intervention Mix. Source of Background Graphic: The Corporate Culture Group

Behavior change messaging and key visuals should typically be ‘pre-tested,’ e.g. through focus groups with the target audience, before being scaled-up and rolled-out through a small-scale trial. Once the impact of the trial is assessed, refinements to the approach can occur through adaptive management. A wider disbursement of the campaign can then be implemented and more significant impact assessment process, such as a Randomized Controlled Trial (RCT), can be instituted. This cyclical process is identified in the 2015 World Development Report, ‘Mind, Society and Behaviour’, as an ‘Intervention Design Cycle’ and a foundation for any behavior change campaign (see Figure 4).

One example of applying this approach is the Chi Initiative, which aims to reduce rhino horn consumption by the middle class urban male in Viet Nam. During each Phase of the Initiative (there have been three so far) a creative company was engaged to review the behavior insight available in the target audience, and then prepare pen portraits (a consumer archetype and set of draft Concepts with two visuals and message options per Concept) to change consumption behavior. The draft Concepts were pre-tested through focus groups with the target audience, to gauge which elements they found influential and why. Annual research continues to be conducted to assess the impact of the successful Concept visuals and messaging, and to generate updated insight to adapt the message over time.

Yes to Sharing the Yield!

Success factors, lessons learned and insights arising from implementation of behavior change approaches to tackle natural resource corruption should be shared with the wider conservation and NRM community to help to streamline efforts for others, and to add to the evidence base in this important area of innovation. To share your experience and explore opportunities to collaborate on learning, contact: [email protected].

Where can I find out more and receive guidance or support to get started?

To receive guidance or support to get started, join the Change Wildlife Consumers Community of Practice.

Further recommended resources on this topic: