Reducing corruption’s impact on natural resources –
How does a gender lens help? 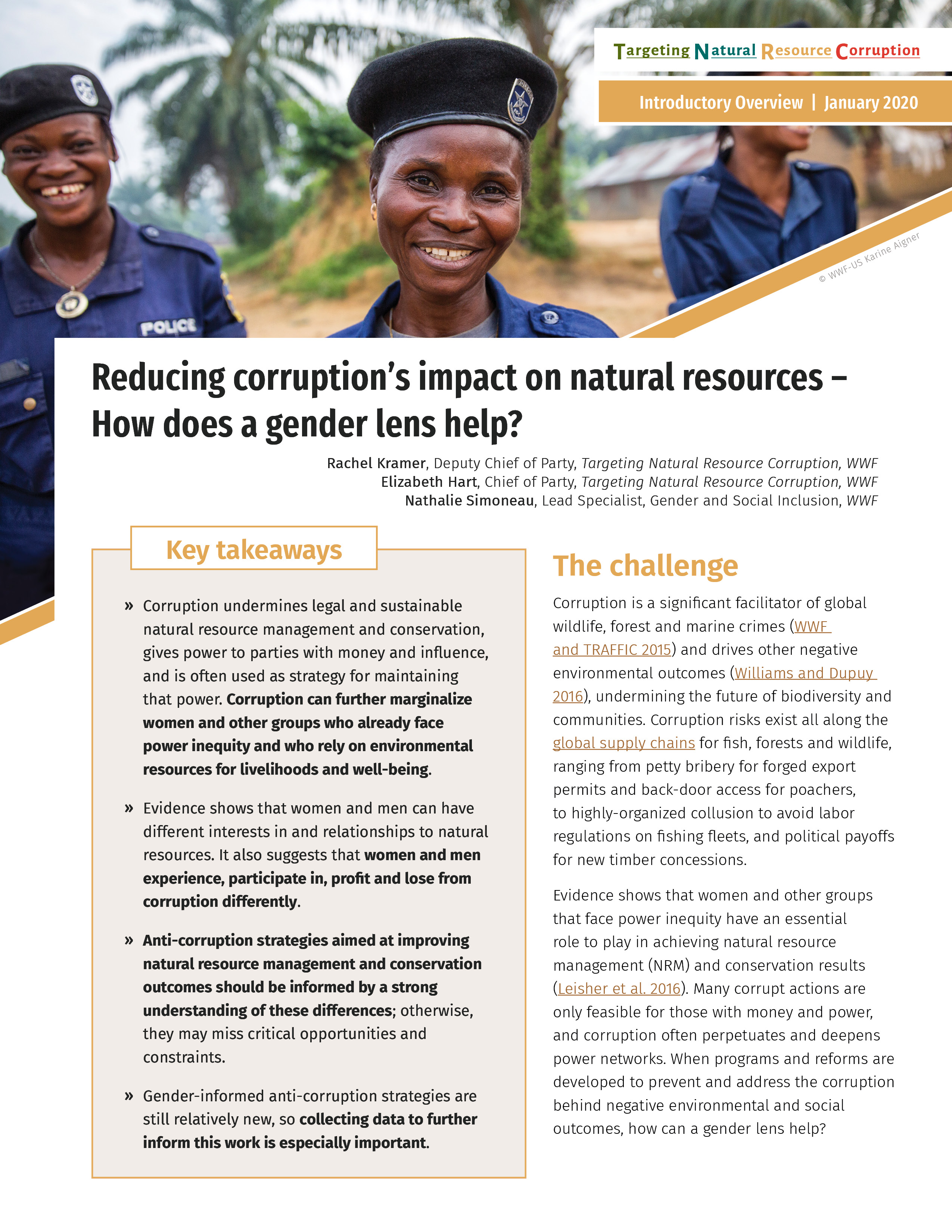 Corruption is a significant facilitator of global wildlife, forest and marine crimes (WWF and TRAFFIC 2015) and drives other negative environmental outcomes (Williams and Dupuy 2016), undermining the future of biodiversity and communities. Corruption risks exist all along the global supply chains for fish, forests and wildlife, ranging from petty bribery for forged export permits and back-door access for poachers, to highly-organized collusion to avoid labor regulations on fishing fleets, and political payoffs for new timber concessions.

Evidence shows that women and other groups that face power inequity have an essential role to play in achieving natural resource management (NRM) and conservation results (Leisher et al. 2016). Many corrupt actions are only feasible for those with money and power, and corruption often perpetuates and deepens power networks. When programs and reforms are developed to prevent and address the corruption behind negative environmental and social outcomes, how can a gender lens help?

Reducing the threats that corruption poses to natural resources involves reducing opportunities for corrupt actions, increasing the likelihood of detecting them, and strengthening accountability when they are detected. Better understanding the relationships among gender, corruption, NRM and conservation adds important depth and definition to the “who, what, how and why” of reforms and programs to address these threats. Asking the right questions at the program or policy design stage and following the basic principles outlined in this paper can help to achieve these objectives.

Gender: Gender refers to the roles, behaviors, activities, and attributes that a given society at a given time considers appropriate for men and women. Gender is part of the broader socio-cultural context, including class, race, poverty level, ethnic group, sexual orientation, and age. In most societies there are differences and inequalities between women and men in responsibilities assigned, activities undertaken, access to and control over resources, as well as opportunities for decision-making.

Gender Mainstreaming: Mainstreaming gender is the process of assessing the implications for women and men of any planned action, including legislation, policies or programs. Gender should not be viewed in isolation. It is a way to make women’s as well as men’s concerns and experiences an integral dimension at every stage of the programming cycle so that women and men equally benefit from opportunities and resources and inequality is not perpetuated.

Gender Analysis: Gender analysis is a critical examination of how differences in gender norms, roles, power structures, activities, needs, opportunities and rights affect men, women, girls and boys in a certain situation or context. It includes collection and analysis of sex-disaggregated data and gender information to understand gender differences and gaps, determine gender differentiated impacts and risks, to identify measures to avoid adverse gender impacts, and to uncover and act on opportunities to address gender gaps and inequalities relevant to the activity.

For more information on these concepts, see this IUCN glossary.

The U4 corruption glossary defines other important concepts related to corruption and anti-corruption approaches.

Gender, natural resource management, and corruption: What does the evidence tell us?

Corruption thrives on and perpetuates weaknesses in governance and accountability mechanisms. Reducing corruption in natural resource governance involves enhancing accountability, integrity and transparency throughout the system. At the same time, a central lesson of anti-corruption work is that the same reforms are rarely likely to work in every context, so carefully assessing the context and conditions necessary for those reforms to be successful is essential (USAID 2015, DFID 2015). Equal treatment and non-discrimination are part of good governance, and they also create conditions that can encourage greater accountability.

Gender plays a significant role in how people use, manage and conserve wildlife, forests and fisheries. In many parts of the world, women are primary users of natural resources: they gather fuel and food from forests and grasslands, tend agricultural plots, and collect water for drinking, cooking, and bathing, for example. But they may not have a seat at the table when decisions are made about how those resources are governed. Addressing gender inequalities where they exist can be as important to achieving sustainability objectives as it is to advancing equal rights (FAO 2016).

Although evidence is still limited, a recent review of several thousand studies and program documents confirms a linkage between the participation of women in forestry and fisheries management groups and better resource governance and conservation outcomes (Leisher et al. 2016). India and Nepal offer the strongest evidence of these benefits. Experience there suggests that involving women can enlarge the pool of citizens committed to forest conservation, increase representation of landless community members in decision making, and may ultimately support better compliance with resource management rules (Agarwal 2009).

We know that the ability of women to claim their rights is often hindered by corruption, particularly in conflict-affected settings and other settings where corruption is high (OECD 2017). The 2019 Global Corruption Barometer in Latin America and the Caribbean, for example, found that women are more likely to pay bribes for public services than men—and that one in five experiences sexual extortion or knows someone who has when accessing government services.

Some research draws a link between low levels of corruption and greater female participation in government (see, for example, Bauhr et al. 2018). A common idea is that women are less corrupt than men—but it’s not that simple (Nawaz 2009). Part of the explanation lies in inequitable access and opportunity, not just intrinsic characteristics. Corruption often takes place in insider networks, and research suggests that women’s historically limited access to these networks may account for lower levels of corruption among women in public office (UNDP and UNIFEM 2010). Another angle is that an infusion of women may disrupt embedded networks of predominantly male patronage relationships and political ties. Research in Mexico (Grimes and Wängnerud 2012) and Brazil (Brollo and Troiano 2016) supports this conclusion. Similar dynamics can be found in studies of the judiciary (Ruiz 2019) and law enforcement (Americas Quarterly 2011).

Part of the reason may also be that women and men hold different attitudes toward corruption. There’s some support for the conclusion that women are more risk-sensitive than men (Boehm 2015), so they may not want to participate in potentially punishable activities. Interviews with members of Peru’s mostly-female traffic police, a force thought to be less corrupt than the rest of Peruvian law enforcement, suggested that some women were particularly proud of their less-corrupt reputation and equated taking money with a type of prostitution (Americas Quarterly 2011).

Ultimately, a gender lens helps us to understand corruption’s impacts and dynamics for both men and women. Here are a few examples:

Politics and economic power—and therefore high-level grand corruption—are still predominantly the province of men. While there are certainly examples of corrupt actions by women in positions of power and of political dynasties where corrupt practices and illicit wealth extraction is a family affair, the balance in this regard is heavily weighted toward men.

How can a gender lens support better anti-corruption, conservation and NRM outcomes?

Where corruption is undermining conservation outcomes, gender considerations can contribute to the design and assessment of natural resource management initiatives that prevent corruption, and environmental enforcement efforts that address corruption (within ranger patrols, police forces and judiciaries). Understanding the role of gender in peoples’ experiences of and participation in corrupt activity clarifies who should be targeted for activities and reforms and what types of changes might be necessary. Figure 1 offers four examples of what applying a gender lens can look like in practice. Given that gender-informed anti-corruption strategies are still relatively new, collecting data and sharing learning on outcomes of gender mainstreaming efforts is especially important to further inform this work. 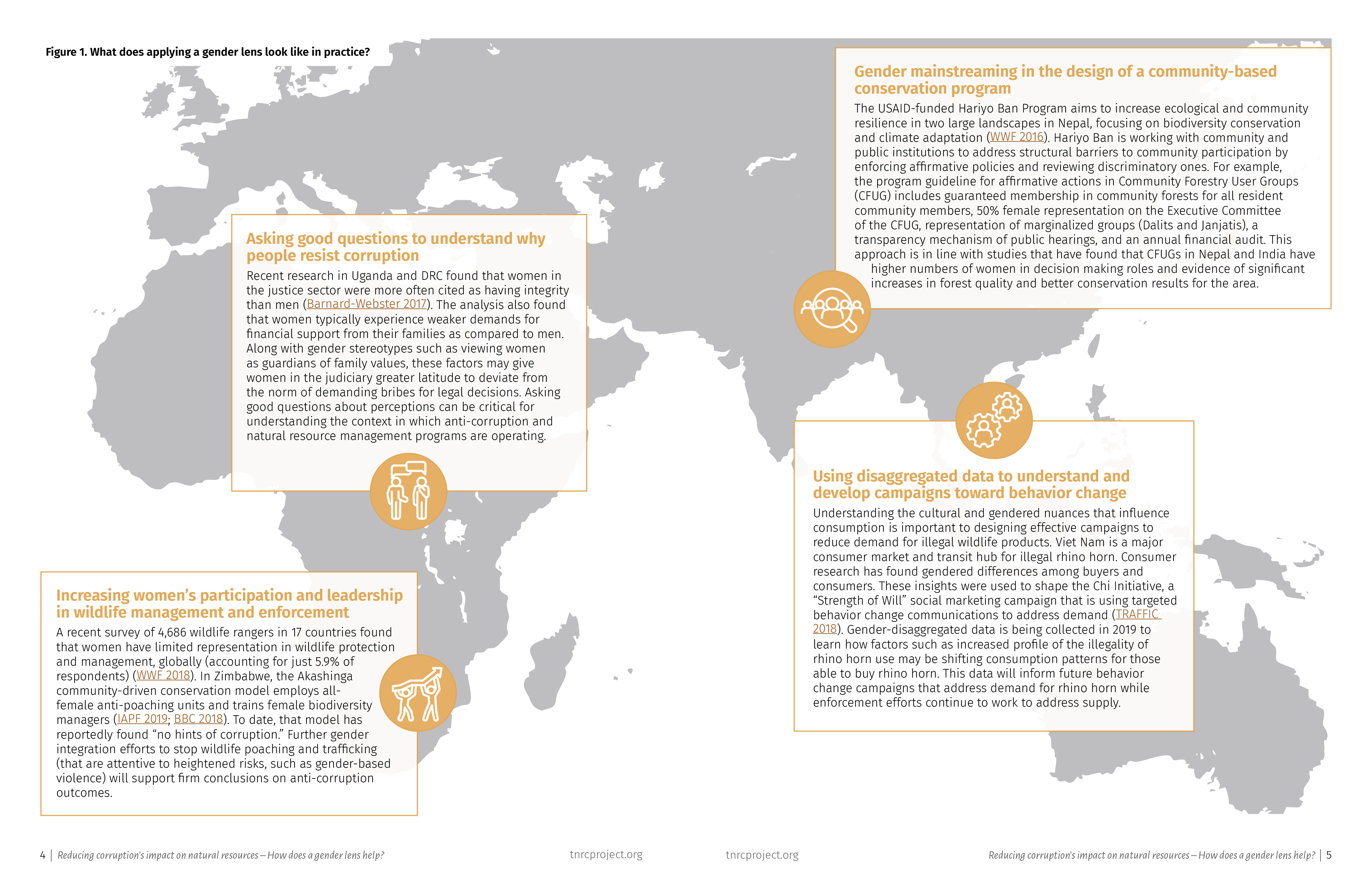 In the Hariyo Ban II program region (see Figure 1), as elsewhere, gender-based violence (GBV) is a prevalent problem. Women were identified as particularly vulnerable during conservation work, when patrolling forests, participating in meetings, speaking out about local leaders and holding positions that were assumed to be outside of their “qualifications.” Project managers realized that addressing GBV was necessary to enable women to participate and benefit from the project while avoiding putting them at increased risks. They also understood that working with men would be essential to bringing about transformation. The project developed a cadre of men champions to fight discrimination and GBV and also worked to raise awareness on GBV and gender equality and social inclusion issues and to promote their mainstreaming into national policies. For more information, visit the Hariyo Ban website.

When it comes to incorporating gender, don’t just “add women and stir.” Find out what roles, interests, pressures and opportunities women possess vis-à-vis the resource and the corruption problem at hand. This includes limits on women’s power and influence, and ways that it might be strengthened. At the same time, accountability mechanisms need to be just as strong when women are in influential roles as when men are. In other words, when applying a gender lens to corruption and NRM problems, look beneath the generalizations to the specifics.

Practitioners should ask these questions at the program or policy design stage:

With the answers in mind, practitioners should follow these basic principles:

Barnard-Webster, K. 2017. “The Value of a Stereotype: Women Resisting Corruption.”

Brollo, F. and U. Troiano. 2016. “What happens when a woman wins an election? Evidence from close races in Brazil.”

DFID. 2015. “Why corruption matters: Understanding causes, effects and how to address them.”

Grimes, M. and Wängnerud, L. 2012. “Good government in Mexico: The relevance of the gender perspective.”

OECD. 2017. “Gender equality and women’s empowerment in fragile and conflict-affected situations: A review of donor support.”

Ruiz, V. 2019. “The Role of Women Judges and a Gender Perspective in Ensuring Judicial Independence and Integrity.”

UNDP. 2012. “Seeing Beyond the State: Grassroots Women’s Perspectives on Corruption and Anti-Corruption.”

UNDP and UNIFEM. 2010. “Corruption, accountability and gender: Understanding the connections.”

UNODC. 2013. “Gender Mainstreaming in the Work of UNODC: Guidance Note for UNODC Staff.”

Williams, A. and K. Dupuy. 2016. “At the extremes: Corruption in natural resource management revisited.”

WWF and TRAFFIC. 2015. “Strategies for fighting corruption in wildlife conservation: A primer.”