Corruption definitions and their implications for targeting natural resource corruption 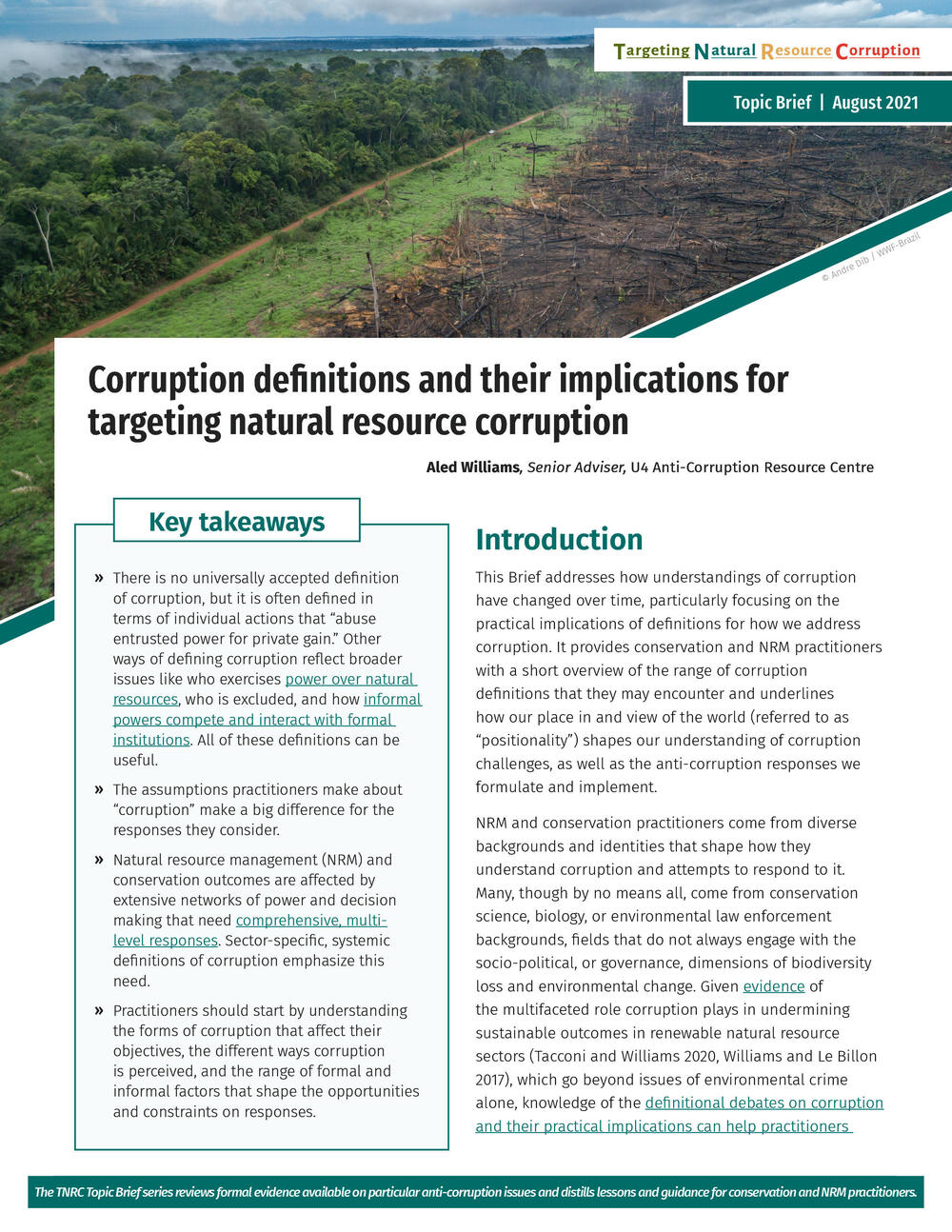 This Brief addresses how understandings of corruption have changed over time, particularly focusing on the practical implications of definitions for how we address corruption. It provides conservation and NRM practitioners with a short overview of the range of corruption definitions that they may encounter and underlines how our place in and view of the world (referred to as “positionality”) shapes our understanding of corruption challenges, as well as the anti-corruption responses we formulate and implement.

NRM and conservation practitioners come from diverse backgrounds and identities that shape how they understand corruption and attempts to respond to it. Many, though by no means all, come from conservation science, biology, or environmental law enforcement backgrounds, fields that do not always engage with the socio-political, or governance, dimensions of biodiversity loss and environmental change. Given evidence of the multifaceted role corruption plays in undermining sustainable outcomes in renewable natural resource sectors (Tacconi and Williams 2020, Williams and Le Billon 2017), which go beyond issues of environmental crime alone, knowledge of the definitional debates on corruption and their practical implications can help practitioners understand the different ways that stakeholders may be using the term and broaden the range of possible responses.

Specialized definitions of corruption exist for NRM sectors (e.g., Robbins 2000, Gore et al. 2013), but the world of anti-corruption practice most commonly uses the definitions adopted by the World Bank and Transparency International. As shown by Katzarova (2019), these definitions have specifically Western origins, leading to debates as to their applicability and usefulness in non-Western contexts, where many (although, again, not all) NRM and conservation practitioners live and/or work. The main multilateral treaty guiding anti-corruption work globally, the UN Convention Against Corruption (UNCAC), notably does not explicitly define corruption. Rather, it lists and defines a series of offences that should be criminalized and covered by legal provisions in every jurisdiction covered by UNCAC. These include bribery of national and foreign public officials and, in the private sector, embezzlement, money laundering, concealment, and obstruction of justice.

Although its formal definition of corruption remains unchanged, the World Bank´s understanding of corruption has evolved over time. The 2020 Global Report on Enhancing Government Effectiveness and Transparency treats anti-corruption as a systemic issue, stating that: “The multi-faceted and complex nature of corruption has shown that while technical solutions and compliance measures are enablers, they are rarely sufficient in themselves to root out corruption. In many societies corrupt behavior is deeply rooted in the historical origins, social norms and political culture. It is not unusual to find strong inter-linkages between power, politics, and money.”

How has corruption been defined, including in NRM and conservation sectors?

Even if they have not engaged with anti-corruption work directly, most NRM practitioners will have a general idea what is meant when a person or situation is described as “corrupt”. But such preconceptions may be quite distant from others´ views on corrupt behaviors or, indeed, apparent grey-zones such as lobbying and gift-giving. This is why thorough empirical analysis of corruption, including these potentially varying perceptions, in specific contexts can be so beneficial.

Practitioner preconceptions about corruption can, for example, be shaped by the specifically Western origins of common corruption definitions widely used today. Concern about corruption dates back to antiquity, and the Roman Catholic Church approached corruption as a question of individual morality leading to a tendency, still prevalent today, to view corruption in individualistic terms (Buchan and Hill 2014, Taylor 2001). Indeed, it was only in the 1700s that Western corruption discourse evolved to focus on the more systemic question of institutional integrity in public office (Buchan and Hill 2014).

Since the 2000s, corruption definitions by the World Bank and Transparency International have particularly influenced practice (Mungui-Pippidi 2013). The World Bank defines corruption as the “abuse of public office for private gain” while Transparency International (TI) views corruption as “the abuse of entrusted power for private gain.” Both definitions highlight individual behavior, but there are also differences in their understandings of corruption. The World Bank emphasizes the public sector's role while TI's definition, though broadened to include the private sector, assumes power is typically entrusted to leaders, seemingly excluding those who grab it by force, as is typically the case in authoritarian settings (Andersson and Heywood 2009).

Although popular, the World Bank and TI definitions are not the only ones. Nye (1967) suggests corruption is “behavior which deviates from the formal duties of a public role because of private-regarding (personal, close family, private clique) pecuniary or status gains; or violates rules against the exercise of certain types of private-regarding influence.” This definition is at once broad and narrow: it includes non-monetary forms of corruption (nepotism, patronage, etc.) while excluding generally morally offensive behavior (e.g., adultery).

One important distinction among ways of defining corruption is the one between these definitions rooted in individual actions and those that see corruption as a broader, systemic phenomenon. The latter approach is exemplified by Robbins’s (2000) research on the forest sector in India, where he identifies corruption as “a system of normalized rules, transformed from legal authority, patterned around existing inequalities, and cemented through cooperation and trust.” Corruption, in this view, is not only about the behavior of individuals, but about the framework conditions in a given context that enable and reinforce such behavior.

Box 2: What might be missed by adopting popular corruption definitions? Lessons from Ghana

If we were to take the World Bank’s definition of corruption at face value, we could miss crucial issues in settings like Ghana, where, after 2000, large-scale land deals were made amid contested understandings of who owned or controlled land (Boamah 2014a; 2014b). We might not see, for instance, that corruption served the function of (sub-optimally) deciding land allocations for agricultural investments. If our analysis did not capture this functional aspect of corruption, we might also fail to identify opportunities for collective action approaches (e.g., political negotiations) that could bypass the need for corruption (as seen from the perspective of those engaged in it). For more information, see this TNRC webinar.

Positive change against corruption does happen. For example, the Indonesian Corruption Eradication Commission (KPK) has, since 2004, successfully prosecuted over 27 cases of forestry-related corruption, including prominent private and state actors. But how anti-corruption change occurs, and how improvements can be sustained, are still much-debated questions. Limited evidence of the effectiveness of past programmatic or project-based anti-corruption approaches has sparked a revisiting of basic theories, including definitions. In particular, the dominant theoretical approach behind most past anti-corruption approaches, the principal-agent theory, has been critiqued.

Principal-agent theory, like many common definitions of corruption, emphasizes individual behaviors. In basic terms, it states that corruption is a cooperation problem between individuals where information and power asymmetries, coupled with personal interests, give agents opportunities to pursue these interests at the expense of a principal (Marquette and Pfeiffer 2015, Rose-Ackerman 1978). Public officials (agents), for example, enjoy discretionary power over state resources and informational advantages over citizens (principals), giving them opportunities to abuse this power for private gain (Williams and Dupuy 2019). So, in settings where institutions are weak, there are few controls preventing corrupt behavior.

The shortcoming of this theory is that it assumes the existence of incorruptible actors, acting as principals, ever ready and able to block the corrupt behavior of other individuals. Anti-corruption action, then, is mainly conceived as controlling the actions of people who hold entrusted or public power – by increasing the likelihood of detection or the certainty and severity of punishment, or by making it harder to commit a corrupt action at all. However, in settings where corruption is so widespread and systemic that acting corruptly is actually expected (i.e., it is “the way things are done”), there may be no normative preference for individuals to avoid corruption, and seeking to control corrupt actions of individuals—through more emphasis on law enforcement, for instance—can fall prey to the same corruption dynamics. Practitioners seeking to reduce wildlife crime, for example, have come across the pernicious effects of systemic judicial corruption on law enforcement, with such corruption cited anecdotally as motivating court-case monitoring efforts.

If corruption can act as a form of institution, whose stubborn resilience is rooted in either widespread public attitudes or corruption’s functionality in (sub-optimally) solving problems (Marquette and Pfeiffer 2015), alternative approaches may be more effective. This observation has given rise to new thinking about corruption as a “collective action” problem rather than a principal-agent problem.

Collective action approaches generally focus on changing attitudes about corruption and create alternatives to using corruption to solve problems rather than building and implementing detailed controls against corrupt actions. Such approaches view corruption as symptomatic of deeper challenges in societies (e.g., limited trust) that, if addressed (e.g., through trust-building and conflict resolution approaches), could weaken incentives to engage in corrupt behavior. As illustrated in Box 2, an understanding of corruption that recognizes its roots beyond the individual choices and incentives of principals and agents can illuminate options for tackling corruption in natural resource sectors (Tacconi and Williams 2020).1

Corruption is a complex phenomenon linked to, and to some extent overlapping with, many other challenges (e.g., inequality, conflict, social injustice, rights abuses, authoritarianism, environmental harms, illegality). There is no universally accepted definition of corruption, but several definitions are popularly used. These definitions help shape the corruption problems NRM and conservation practitioners see and their efforts to address them.

1 You can find material on collective action approaches to corruption from the Anti-Corruption Evidence consortium, U4, the OECD and Basel Institute on Governance.

Boamah, F. 2014b. How and why chiefs formalize land use in recent times: the politics of land dispossession through biofuels investments in Ghana. Review of African Political Economy, 41(141), 406–423.