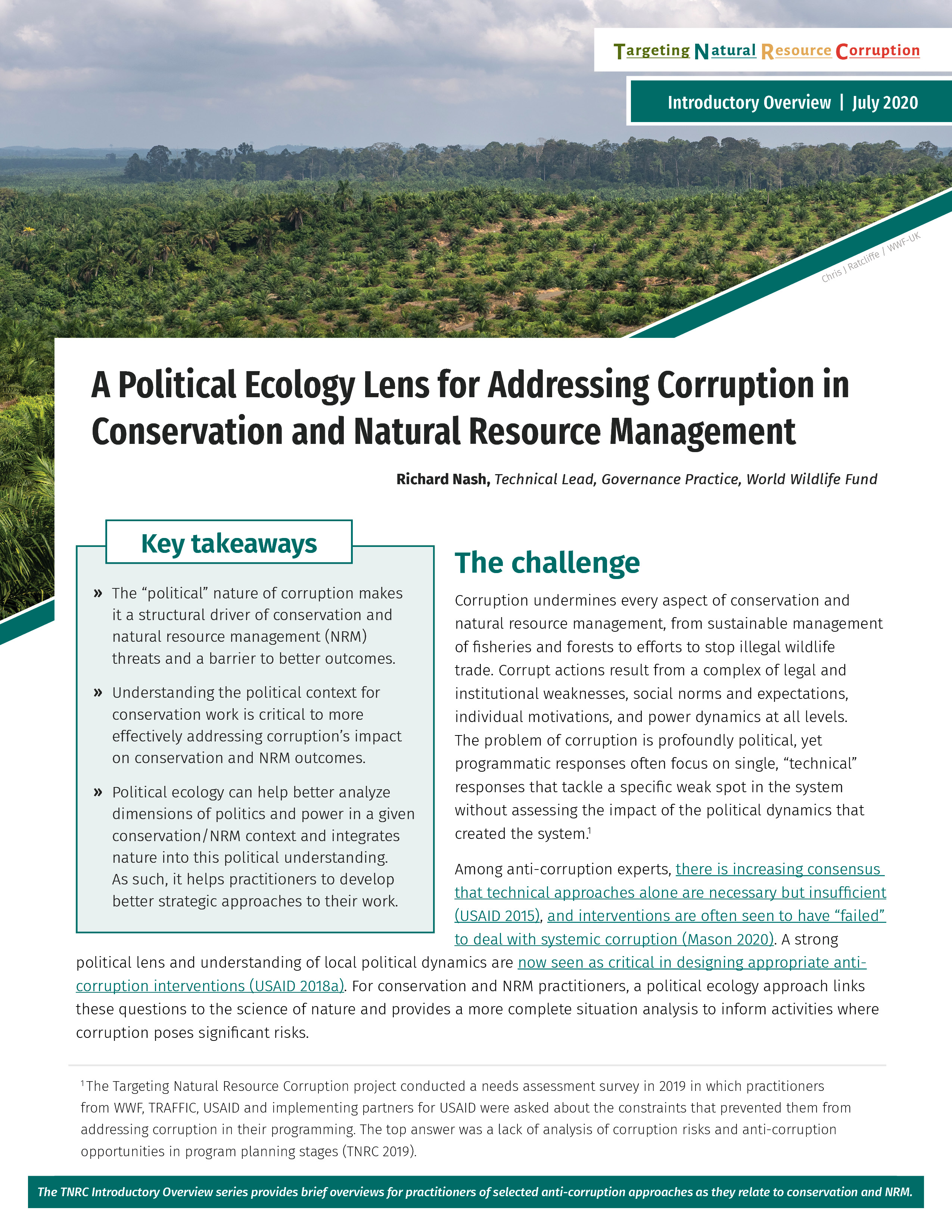 Corruption undermines every aspect of conservation and natural resource management, from sustainable management of fisheries and forests to efforts to stop illegal wildlife trade. Corrupt actions result from a complex of legal and institutional weaknesses, social norms and expectations, individual motivations, and power dynamics at all levels. The problem of corruption is profoundly political, yet programmatic responses often focus on single, “technical” responses that tackle a specific weak spot in the system without assessing the impact of the political dynamics that created the system.1

Among anti-corruption experts, there is increasing consensus that technical approaches alone are necessary but insufficient (USAID 2015), and interventions are often seen to have “failed” to deal with systemic corruption (Mason 2020). A strong political lens and understanding of local political dynamics are now seen as critical in designing appropriate anti-corruption interventions (USAID 2018a). For conservation and NRM practitioners, a political ecology approach links these questions to the science of nature and provides a more complete situation analysis to inform activities where corruption poses significant risks.

Political economy – A grand (if imperfect) synthesis of various strands of thought, treating political economy as the methodology of economics applied to the analysis of political behavior and institutions (Weingast and Wittman 2008).

Political economy analysis – A structured approach to examining power dynamics and the economic and social forces that influence development (USAID 2018b).

Political ecology – An interdisciplinary field of the study of ecological processes and human-environment relations.

Political ecology analysis – An inter-disciplinary approach (that incorporates some aspects of political economy) to understand the various processes on how and why a landscape/seascape/wilderness may have come to exist and be managed in a particular way, and what the social and political consequences of those processes are.

What Is political ecology?

At the core of this is the notion of “power” and asymmetrical/uneven power relations. “Power” itself is an abstract concept, but essentially it is the ability of groups and individuals to make others act in the interest of those groups and individuals and to bring about specific outcomes. Power can be exercised in numerous ways, including money, violence, social pressures, religion, ideology, technology, or the media. In order to construct a functioning society, some sort of arrangement between people and the governing authority has to be arranged, with power invested in that authority – this is often termed the “political settlement” (Laws and Leftwich 2014). The abuse of that entrusted power under a given political settlement, by a given authority (which may be public but in certain contexts could be private,) is at the core of understanding why corruption is so enduring and systemic in many contexts.

One way to understand the political settlement is to undertake a political economy analysis. Political economy2 analysis, which has been broadly used to inform international development programming, can form part of a larger political ecology analysis, but the two are not identical, and they may require social and natural science skills from different disciplines.

The following areas of analysis can form a core of political ecology analysis:

Formulating and understanding these questions for a specific context allows NRM and conservation practitioners to think politically – and thereby work politically to achieve better outcomes. With this analysis, practitioners can better understand what has become corrupted and why, as well as what might be done about it.

Political ecologists have documented the mechanisms through which drug trafficking organizations (DTOs) in Guatemala contribute to deforestation in Guatemala’s Maya Biosphere Reserve (Devine et al. 2020). The political settlement in Guatemala produced weak and easily corrupted institutions which DTOs have been able to exploit, creating a symbiotic relationship in the protected areas of the park, where airstrips are created to fly drugs in and out of the country. The proceeds from drug trafficking can then be laundered into the licit cattle market, and additional profits can be made by controlling territory and corrupting border posts to reduce costs for selling beef across the border. Where the narco-ranchers meet local communities living and working in the mixed-use areas of the park, a “defensive shield” has been created by local communities. Local foresters and conservation allies patrol the area, monitor activities, and report illegal activities to national authorities. Deforestation rates in this part of the forest are far less than in the official protected area. This analysis helps demonstrate the fundamental connection between power and ecological outcomes.

A political and scientific understanding?

The concept of the “political forest” (Devine and Baca 2020) helps to illustrate the intersection of the ideas behind political ecology. The two basic prerequisites comprising political forests are territorial zones (forest territories) and forest species. A territorial zone that a “forest” occupies is usually politically created by the state, which decides what areas are forest while also determining what areas are not forest. These demarcations are usually accompanied by specific laws and regulations intended to exclude specific uses and users except those authorized by the Ministry of Forests. These decisions can create social displacement and grievances, particularly, for example, with local residents who may hold some form of tenure rights and who may actively work to undermine the state-imposed exclusion.

The political forest can be contrasted with the “scientific” forest (see FAO or CBD definitions of forest), which might be measured, for example, by total canopy cover above a certain contiguous percentage. The scientific forest is unlikely to map completely onto the political forest—areas of state control demarcated and controlled by state institutions on the ground.

The issue of uneven power relations lies at the core of systemic corruption issues, and nature may play a significant role in creating and supporting those uneven relationships. With this understanding, conservation practitioners can gain better insight into the true character of the “problem” that they are dealing with. Corruption may be about a breach of the local law, but it may also be something deeper (World Bank 2019) that touches on complex social and political arrangements (U4 2019).

As part of an anti-corruption analysis, political ecology approaches can help us understand why politicians may not have, or may not be able to, exercise the political will to undertake key reforms. It can also help NRM and conservation practitioners to understand whether or not scientifically-based approaches have political ramifications in a given context.

Where should I start?

1 The Targeting Natural Resource Corruption project conducted a needs assessment survey in 2019 in which practitioners from WWF, TRAFFIC, USAID and implementing partners for USAID were asked about the constraints that prevented them from addressing corruption in their programming. The top answer was a lack of analysis of corruption risks and anti-corruption opportunities in program planning stages (TNRC 2019).

2 The phrase “political economy” has had many different meanings over time e.g. the source of managing a nation’s resources (Adam Smith); the ownership of the means of production to influence historical processes (Marx); as simply an area of study for the interrelationship between economics and politics; or as a methodological approach to understanding public choice and individual rationality versus a sociological approach centered on institutions (Weingast and Wittman 2008).