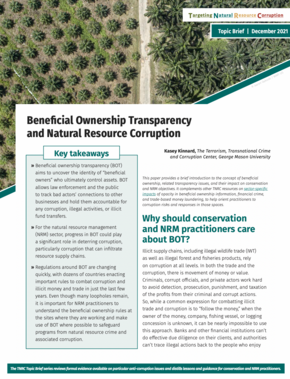 This paper provides a brief introduction to the concept of beneficial ownership, related transparency issues, and their impact on conservation and NRM objectives. It complements other TNRC resources on sector-specific impacts of opacity in beneficial ownership information, financial crime, and trade-based money laundering, to help orient practitioners to corruption risks and responses in those spaces.

Why should conservation and NRM practitioners care about BOT?

Illicit supply chains, including illegal wildlife trade (IWT) as well as illegal forest and fisheries products, rely on corruption at all levels. In both the trade and the corruption, there is movement of money or value. Criminals, corrupt officials, and private actors work hard to avoid detection, prosecution, punishment, and taxation of the profits from their criminal and corrupt actions. So, while a common expression for combatting illicit trade and corruption is to “follow the money,” when the owner of the money, company, fishing vessel, or logging concession is unknown, it can be nearly impossible to use this approach. Banks and other financial institutions can’t do effective due diligence on their clients, and authorities can’t trace illegal actions back to the people who enjoy the profits. As a result, the powerful financial incentives to engage in illegal and unsustainable exploitation of natural resources and species continues.

What exactly is beneficial ownership?

The Financial Action Task Force (FATF) defines a beneficial owner as the “natural person(s) who ultimately own(s) or control(s) a customer and/or the natural person on whose behalf a transaction is being conducted.” The concept also includes “those persons who exercise ultimate effective control over a legal person or arrangement.” More simply, a beneficial owner of a company[1] or entity is the human person who ultimately controls the decisions of the company and/or benefits from its success.

Beneficial ownership transparency is the availability of information about who that ultimate owner is. There is no singular method for achieving this transparency and harmonizing it across jurisdictions, but the common thread is to require that companies provide more complete and accurate information about their beneficial owner(s) and that this information should be accessible and verifiable to the public or, at the very least, to government and law enforcement.

Shell company: an incorporated company that does not have significant operations, assets, business activities, or employees.

Front company: a functioning company that has all the characteristics of a legitimate business but serves only to disguise and obscure illicit (financial) activity.

Anonymous company or phantom firm: a corporate entity with purposefully disguised ownership so it can operate without public or legal scrutiny.

Consignor, Settlor, Trustee, Nominee: all persons or entities that might assist in creation or registration of a company and be named as legal owner.

Trusts: a relationship whereby property is held by one person while another has use and benefit of it. Often exempted from BOT, against best practice advice of advocates.

Bearer shares: like ordinary shares in a company, but the name of the owner of a bearer share is not recorded anywhere.

Legal person: a human or non-human entity that can be treated as a person for legal purposes, like owning property, being sued, or entering contracts.

Offshore: refers to outside the country or jurisdiction. In financial contexts it typically refers to operating or housing money or companies in another jurisdiction to take advantage of better tax rates, or to hide wealth and evade tax and business regulations.

How is beneficial ownership obscured? 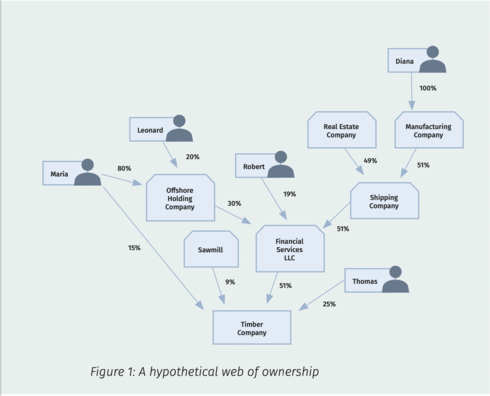 There are many methods to obscure the true ownership of a company. These include using a shell company, listing a proxy as owner, or splitting ownership among multiple people, companies, or jurisdictions. As a result, determining the beneficial owner(s) of any company can be complicated, even though these methods are often legal.

While jurisdictions vary, many define a beneficial owner as having 25 percent direct control and/or significant indirect control (i.e., the ability to terminate board members). In the example in Figure 1, that definition would mean that only Thomas and Maria are beneficial owners, while Robert, Leonard and Diana are not.[2]

Even this highly simplified diagram gives an idea of the complexities of many of these business arrangements and the opportunities for illicit practices that complexity presents. Although Diana owns only a single manufacturing company, the chain of ownership suggests that she could exert enough control over other entities (shipping company, financial services, and the timber company) to be able to conceal a variety of illicit practices throughout the supply chain. Meanwhile, the presence of the offshore holding company could enable all parties to launder illicitly-earned profits and transfer value out of the country.

According to the OECD,

Corporate structures such as shell companies are attractive to criminals and corrupt officials for two main reasons: 1.) they provide an air of legitimacy; and 2.) they provide the ability to shield the identity of the beneficial owner because they are separate from the individuals behind the corporate veil…. For example, criminal funds can be disguised within legitimate business transactions by merging legal and illegal profits, which can be transferred either to other business entities or to domestic or foreign bank accounts….

In the NRM sector, FATF similarly notes, “both small-scale and large-scale criminals involved in [IWT] often use shell and front companies to conceal payments and launder the proceeds of their illicit activities.” Examples of exactly this have been found in many notorious NRM cases. For example:

While most countries require registration of the legal owners of companies, bank accounts, real estate, and other assets, tracking the beneficial owner is a more recent phenomenon. The push for BOT was given a major boost by the 2016 Panama Papers revelations. Those disclosures revealed huge numbers of companies created with the assistance of “company formation services,” listing attorneys and other service providers as owners with no disclosure of who actually benefitted from company profits. A large number of “respectable” business people, politicians, and other public figures appeared in the more than 200,000 anonymous companies that shielded their assets from public view and possibly also from taxes or conflict of interest declarations. The Pandora Papers, released in October 2021, revealed the continued prevalence of the use of tax havens and shell companies to hide funds and obscure ownership information, highlighting the continued need for strengthened BOT.

The most effective BOT regimes publicly share the identity of beneficial owners of companies and other entities. According to Transparency International, such public registers “would allow dirty money to be more easily traced and make it more difficult and less attractive for people to benefit from the proceeds of corruption and crime.” Where data is either unavailable to the public or available for a fee only, it is more difficult for any organization to know who they are doing business with and therefore protect their work. Opacity of ownership information also makes it harder to investigate and prosecute those who benefit from illicit activity in the natural resource sectors.

Whether public or not, while requiring a beneficial ownership registry is a simple idea, implementing the policy and keeping the data updated is not. It can be technically complex, although resources exist like the Open Ownership Principles. Open Ownership’s resources spell out best practices for establishing (public) BOT registries, including detailed guidelines for ensuring accuracy of data through verification and making registries freely available to the public. Additionally, jurisdictions are subject to lobbying by local and international business interests to allow exceptions or restrict access, a process which must be managed carefully to avoid a race to the bottom.

The state of BOT around the globe

In recent years, support for beneficial ownership registries has grown. According to the Tax Justice Network, as of April 2020, 81 of 133 countries surveyed had some kind of BOT regulation, while just two years earlier, that figure was only 34 of 112. The UK was one of the first major economies to establish a publicly available corporate registry, in 2016, although notorious tax havens among its overseas territories were not initially included, and critics have pointed out that there is no designated staff assigned to monitor the accuracy of the registrations.[3] The US passed BOT requirements at the end of 2020, to be implemented in 2022. Even though the US BOT legislation leaves substantial loopholes and does not include a public registry, experts agree that the movement towards BOT by major economies like the US and UK will be felt around the world.

Among other economies, Ecuador is held up as a model for the amount of publicly available beneficial ownership information. Cyprus, an infamous tax haven, is in the process of establishing a registry, although it is not the public registry required of EU member states. Ghana and Kenya, two of Africa’s largest economies, launched their registries in the last quarter of 2020.

Many other countries have begun the process of establishing and enforcing BOT registries, based on their membership in international groups. The EU, for example, required members to have public registries by the end of 2020. The Extractive Industries Transparency Initiative (EITI) also requires member states to register beneficial owners in the extractive sectors.

The state of BOT regulation currently is fluid and growing quickly. But even with this progress, criminal and corrupt actors will not want to start playing by these new rules. They will keep finding new locales to exploit, until all jurisdictions recognize the importance and take steps toward full BOT. In the meantime, several organizations study and advise on best practices for establishing BOT regulation and track such legislation globally. See Box 2.

What can practitioners do?

There are many ways NRM and conservation practitioners can consider BOT to enhance decision making, safeguard projects from corruption and illicit financial flows, and leverage BOT for their work.

[1] For the purposes of this introduction, we will use the word “company” or “entity” to describe the collective of companies, trusts, fronts, shells, etc.

[3] According to reviewers, regulators do not currently have the statutory power to do so, but soon will. 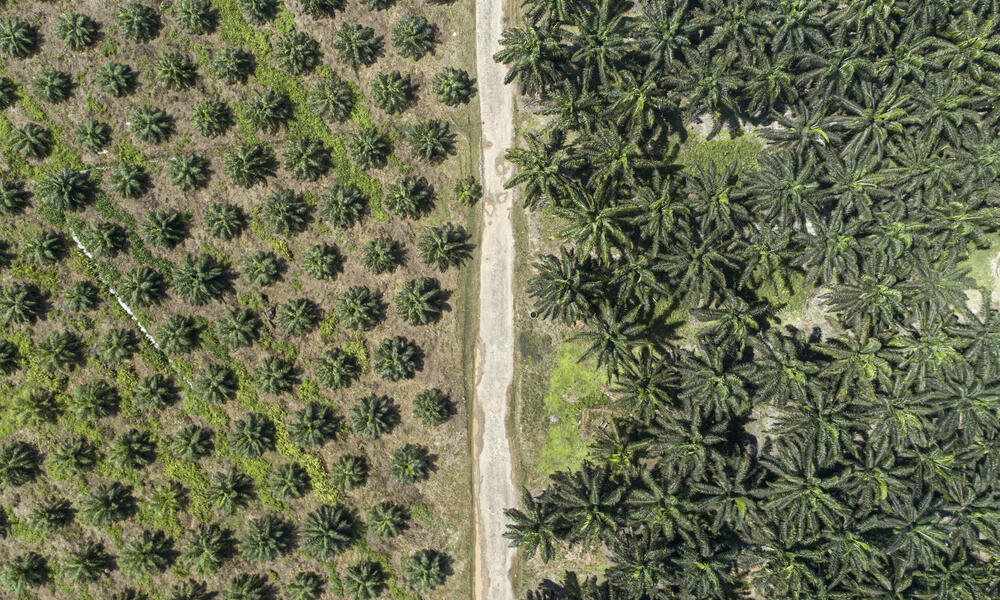