Why is money laundering a critical issue
in natural resource corruption? 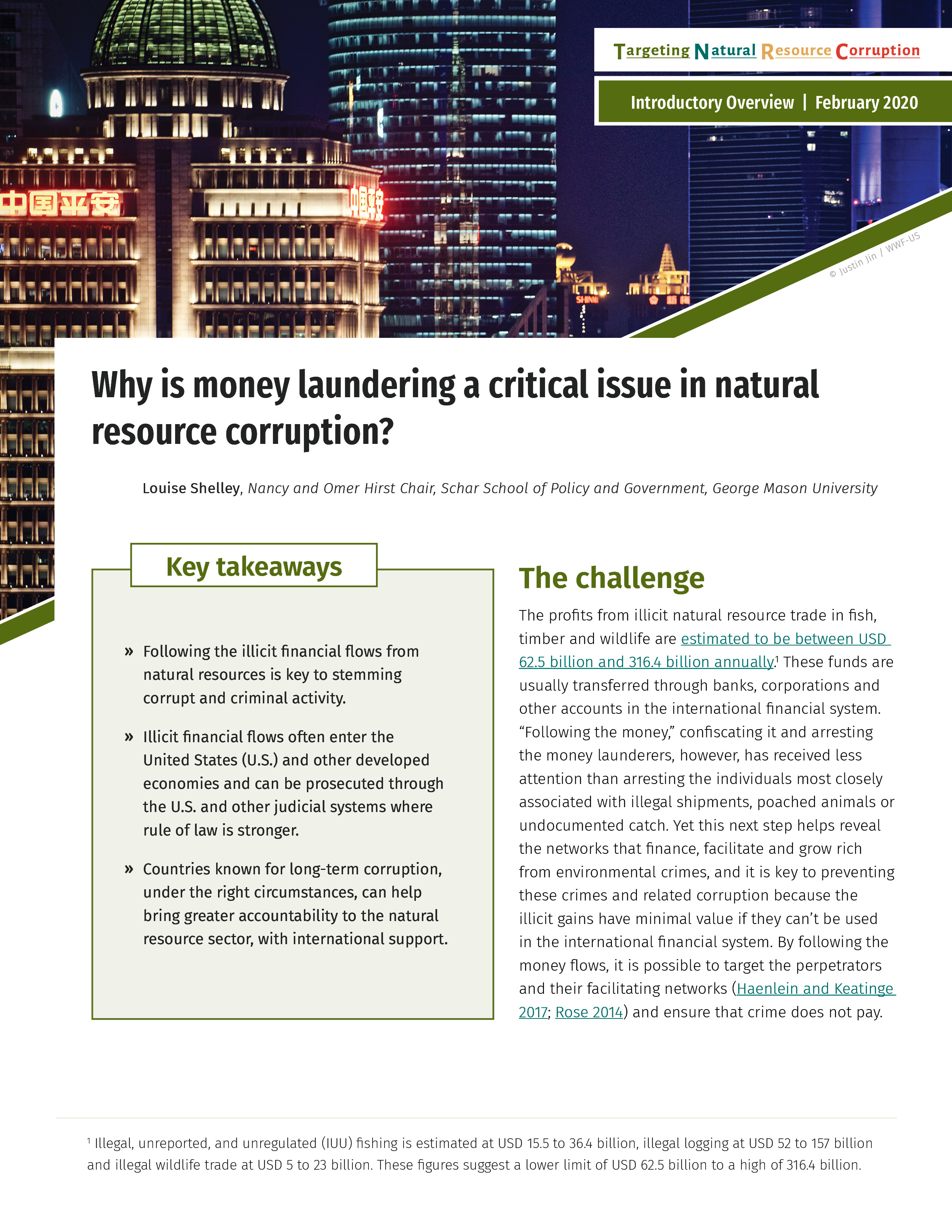 The profits from illicit natural resource trade in fish, timber and wildlife are estimated to be between USD 62.5 billion and 316.4 billion annually.1 These funds are usually transferred through banks, corporations and other accounts in the international financial system. “Following the money,” confiscating it and arresting the money launderers, however, has received less attention than arresting the individuals most closely associated with illegal shipments, poached animals or undocumented catch. Yet this next step helps reveal the networks that finance, facilitate and grow rich from environmental crimes, and it is key to preventing these crimes and related corruption because the illicit gains have minimal value if they can’t be used in the international financial system. By following the money flows, it is possible to target the perpetrators and their facilitating networks (Haenlein and Keatinge 2017; Rose 2014) and ensure that crime does not pay.

Money laundering: The process by which criminals disguise the original ownership and control of the proceeds of criminal conduct by making such proceeds appear to have derived from a legitimate source.

Illicit financial flows: Movement of funds from illicit sources, including corruption and illegal natural resource trade, into and through the financial system.

Follow the money techniques: Method used by investigators to track the financial flows among actors suspected of crime or corruption.

The processes by which criminally-derived property may be laundered are many, but they typically involve three stages (see Figure 1): 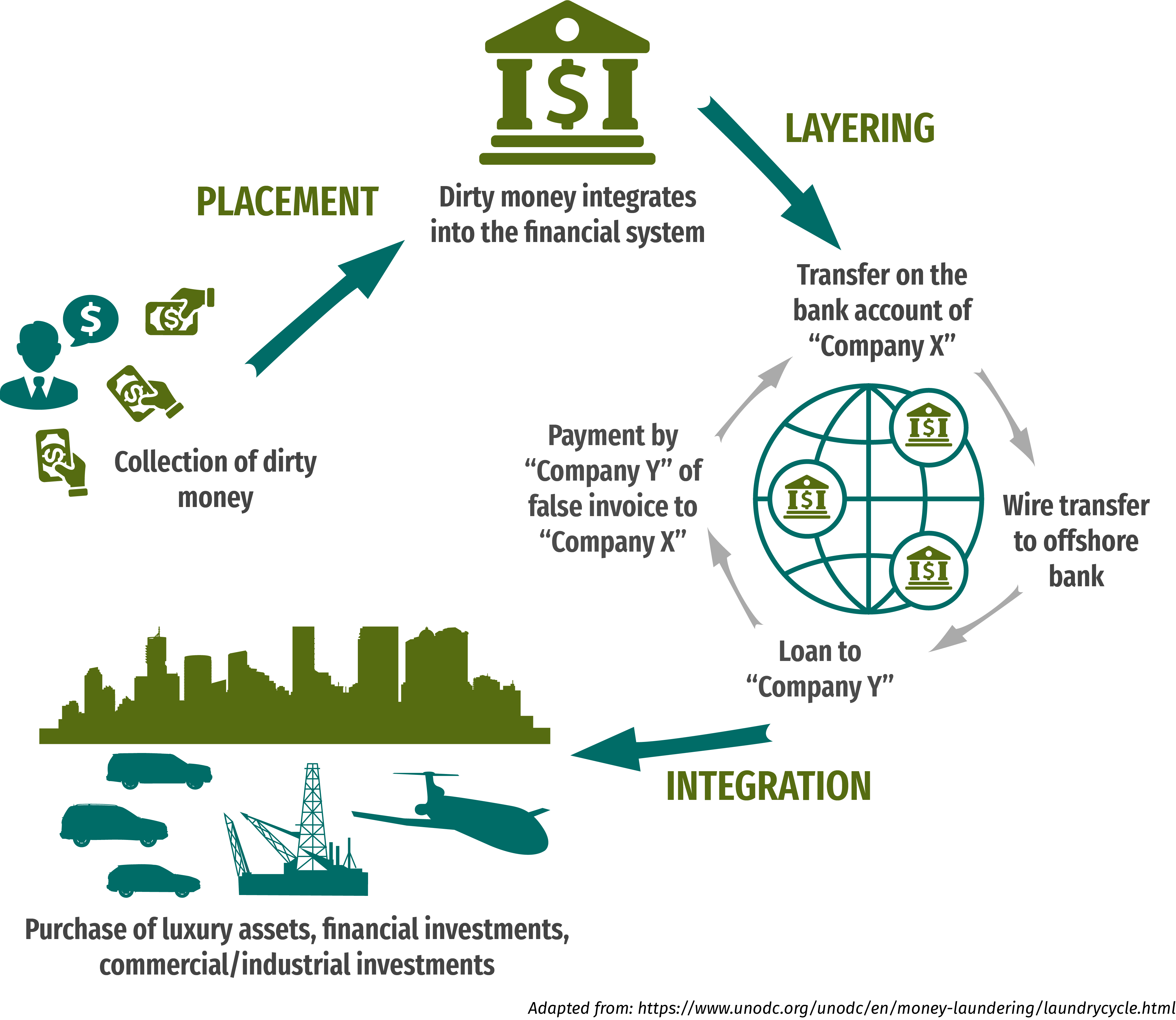 Movement of money can occur in the simplest form of cash, or it can range to complex schemes through banks, real estate, trade-based money laundering and even crypto-currencies. Examples related to natural resources include the following:

The Indonesian Corruption Eradication Commission (Komisi Pemberantasan Korupsi, KPK) has gained a significant reputation for investigating high-level corruption since its founding in 2003. It has investigated and tried high-level targets and has a high conviction rate.

Unlike other anti-corruption bodies, the KPK has focused on natural resource investigations, especially the corruption associated with the timber sector. In the early 2000s, a parliament member was sentenced to eight years imprisonment for accepting bribes to allow the conversion of protected forest zones into land where trees could be cut. Subsequently, in 2007, two government officials and an executive of a logging company were sentenced for illegal logging. The following year, an eleven-year sentence was handed down to a government regent for his role in illegal logging.

By 2014, one third of regents (heads of district governments) were under investigation for corruption, primarily for issuing logging permits in violation of regulations, mainly to allow expansion of oil palm plantations. The KPK investigations suggest that Indonesia may have lost as much as USD 9 billion in revenues from 2003 to 2014 due to companies under-reporting timber production. Fees and royalties were collected only on approximately 19-23 percent of total timber production.

The KPK for many years sustained efforts to investigate systemic domestic corruption in the natural resource sector and had positive results. Following the money and examining permitting agreements helped bring high-level officials to trial and held them accountable. Significant constraints on the KPK’s powers and independence imposed in late 2019 reveals the difficulty in maintain long-term efforts against corruption in the face of powerful interests.

Is it possible to follow the money in a highly corrupt environment?

Following the money has been used to pursue corrupt actors even in highly corrupt environments. Investigations of corrupt leaders and their financing have provided insights on the networks, assets, and sometimes even personal movements. This process has been used against corrupt officials who have moved their money to the U.S., France, the United Kingdom, Switzerland, and other countries. For example:

While less has been done in countries of the Global South to counter money laundering related to corruption, there are some noted exceptions from Latin America and Asia that reveal the impact of carefully executed investigations even in highly corrupt environments.

Corruption investigations in Africa reveal the role of officials, particularly the police, but little has been done by African authorities to follow the money, (OECD 2018).

The Gecko Project is an investigative journalism initiative focusing on corruption driving land grabs and destruction of tropical rainforests.

Liberty Asia has studied labor trafficking in the fishing sector.

Organized Crime and Corruption Reporting Project (OCCRP) investigates the abuse of power and corruption by government officials. Its environmental investigative work includes illicit trade in timber in Gambia and it covers environmental crime and investigations.

Partner with civil society groups: Many of the investigations noted above were initiated or supported by investigative journalism and engaged non-governmental organizations (NGOs). Efforts to galvanize civil society more broadly against different forms of corruption and illicit trade may also have a positive impact on environmental outcomes, as illegal natural resource activities often converge with other forms of illegal activity. At the same time, programmatic support for civil society and investigative journalism should also take into account the very real risks to environmental defenders and those investigating corruption. Thirteen environmental journalists have been killed and there are 16 more suspicious deaths in the last decade.

Develop knowledge and capacity: Providing training both domestically and internationally to individuals in leadership roles in combating transnational crime may be useful. Donors, NGOs, and international organizations can provide invaluable assistance. The Organization for Economic Cooperation and Development (OECD) holds fora on anti-corruption, and multi-national bodies such as the Organization of American States and the United Nations Office on Drugs and Crime (UNODC) provide advice on enhancing anti-corruption capacity. American organizations also have resources that can be used to advance these efforts. For example, USAID missions can recommend leaders on protection of environmental resources to International Visitor Leadership Program (supported by the U.S. Department of State) on transnational crime, anti-corruption and illicit financial flows. Individuals working in government ministries on natural resource issues can be recommended for Humphrey programs to develop capacity that will be used by the individual on return home to apply techniques learned in the U.S. on mechanisms to protect natural resources.

Consider international options: Several countries and international entities now have laws that facilitate investigation and prosecution of illegal actions through financial investigations. The Foreign Corrupt Practices Act (FCPA) in the United States has been used extensively to target corruption related to the oil sector in many Latin American countries. Large scale multi-national investigations in Brazil started with the Odebrecht case but major investigations concerning bribery have been initiated in Argentina, Ecuador, and Colombia. An indictment in Florida in 2018 addressed money laundering in the U.S. and illicit financial flows from Latin America resulting from illegal gold mining.

1 Illegal, unreported, and unregulated (IUU) fishing is estimated at USD 15.5 to 36.4 billion, illegal logging at USD 52 to 157 billion and illegal wildlife trade at USD 5 to 23 billion. These figures suggest a lower limit of USD 62.5 billion to a high of 316.4 billion.

Wright, T. and Hope, B. 2018. Billion Dollar Whale: The Man who Fooled Wall Street, Hollywood and the World. Hachette.