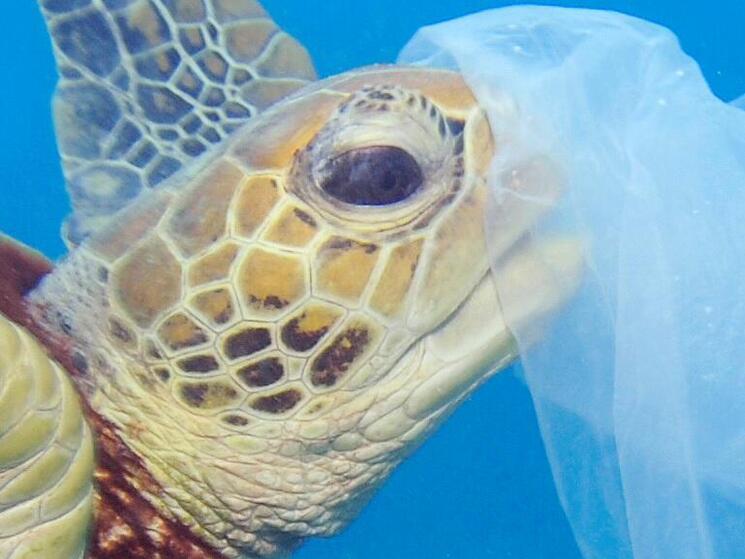 Over the past year, it is estimated that 10 million metric tons of plastic waste have entered the world’s oceans. Our traditional linear economy—where we use, consume and throw away plastics at an alarming rate—has created a world where plastic is found in almost every habitat; from neighborhoods to forests to waterways, and even the deepest point in the ocean. The time to end plastic pollution is now. We have made encouraging progress over the past year, with more than 750,000 activists calling on governments around the world to solve the plastic crisis. WWF is proud to share the progress we have made in 2020 and look forward to a future free of plastic waste.

In 2020, the call to curb plastic pollution was heard on Capitol Hill. The Save Our Seas 2.0 Act builds on the success of existing legislation to better understand the impact of plastic on our environment, to establish U.S. leadership in combating waste leakage and development of materials recycling, and to combat marine debris by investing in new technology. The Save Our Seas 2.0 Act will set the stage for new national action to combat marine debris and advance effective waste management.

The introduction of the Break Free From Plastic Act has advanced national conversations around our domestic reliance on virgin plastic. We cannot fix our linear economy by focusing only on the management of plastic waste. We must reevaluate the ways in which we use and rely on plastic. Extended Producer Responsibility mechanisms, like those in the Break Free From Plastic Pollution Act, have the potential to reduce consumers’ reliance on virgin materials while simultaneously allowing for new investment in our recycling systems and ensuring that plastic producers are responsible for the waste they create. WWF supports a domestic Extended Producer Responsibility system where consumers, corporations and governments can work toward a truly circular economy. In 2021, we are looking forward to advancing this national movement.

Reflecting on the past year, WWF has made incredible progress in understanding the impact of plastic on our natural world and how we can work with partners in the private sector to advance our vision for a circular economy. In June, we released Transparent 2020, the first report of our ReSource: Plastic Footprint Tracker pilot effort. We tracked the footprint of five major companies and found they accounted for 4.2 million metric tons of plastic waste, 70% of which is either landfilled or mismanaged. By understanding the footprint of large corporations, we can better understand and provide recommendations for what interventions need to be taken to reduce those footprints, including suggestions for redesign of packaging to eliminate unnecessary plastic, or by shifting to sustainable inputs.

Recognizing the impact that our commercial fishing practices have on the health of our oceans, we released the comprehensive report “Stop Ghost Gear: The most deadly form of plastic debris” in October. The report spotlights the problem of abandoned, lost, and discarded fishing gear (ghost gear), which makes up 10% of the ocean’s plastic waste and impacts 66% of marine mammals, 50% of seabirds, and every species of sea turtle. We laid out a series of actions that governments, fishing gear producers and designers, fishers, and the general public can take to tackle it.

We have also worked to transform international conversations around plastic waste and waste management practices. A United Nations Treaty on plastic pollution has been endorsed by almost 2 million global activists and more than two-thirds of UN member states. With the release of “The Business Case for a UN Treaty on Plastic Pollution” in October, we found that plastic pollution causes $13 billion in damage to marine ecosystems every year. Together, 31 large corporations have supported the call for an international treaty.

We also launched the U.S. Plastics Pact alongside our partners at The Recycling Partnership and the Ellen MacArthur Foundation. The Pact focuses on four main goals to remove problematic packaging from our system and work toward an economy that prioritizes the use of recycled content. With more than 80 members spanning industry groups, corporations, state and municipal agencies, national environmental organizations and members of academia, the Pact will release a roadmap to circularity in early 2021, with national footprint tracking and policy recommendations to follow.

In 2020, we have made great progress in understanding the impact that plastic waste has on our communities and our natural world, even amid a pandemic. We have also built on enormous ambition across our members, our private sector partners and national and international policymakers. 2020 was a momentous year for combating plastic waste and 2021 will build on this success to end plastic pollution.