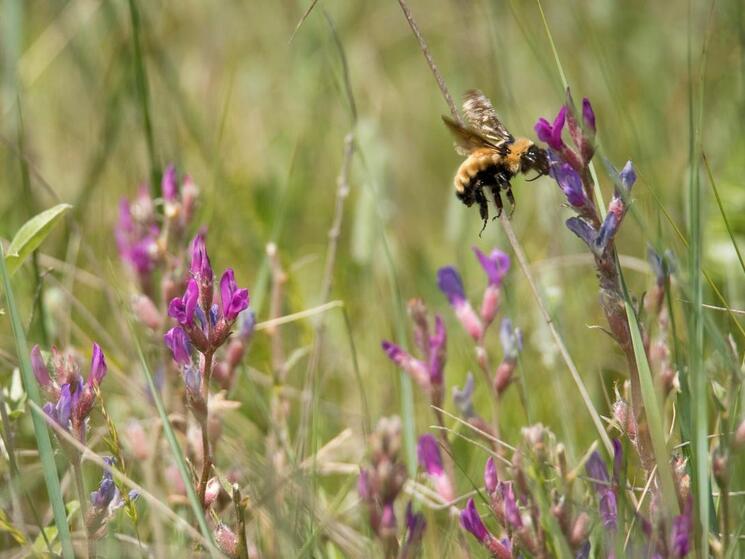 To Know a Grassland

It is impossible to gain a real understanding of a grassland until you’ve spent a great deal of time in one, watching, listening, and returning time and again to observe seasonal changes, or how the rise and fall of moisture influences wildlife and wildflower blooms. The first lesson that we’re often taught is just how deeply complicated these ecosystems are.

Aldo Leopold wrote, “Our ability to perceive quality in nature begins, as in art, with the pretty. It expands to values as yet uncaptured by language.” Leopold understood the complexity of grasslands, and I can’t help but believe he had the prairie in mind when he wrote those words. In 1936, the author of A Sand County Almanac oversaw the world’s first prairie restoration project at the University of Wisconsin-Madison Arboretum. The land, which became known as Curtis Prairie, was former farmland, broken and plowed in the early 1800s and remained in use until the scourge of the Dust Bowl. Leopold died in 1948, while fighting a grassfire near his famous shack, but the restoration work at the Curtis Prairie continues to this day.

Although we now have a much better understanding of the science of grasslands than we did in Leopold’s time, our increased knowledge has only served to confirm the importance of keeping them healthy and intact. We now understand these threatened ecosystems as more than just a haven for plant and animal life, but also as carbon sinks, which, along with forests, help mitigate climate change, and keep the air clean. They are also water filtration and storage systems, which function like massive sponges, providing clean drinking water to millions of people and moderating downstream flooding.

And we know how fast we’re losing them. WWF’s 2021 Plowprint Report has revealed that, for the second year in a row, grasslands across the Great Plains continue to be lost at an alarming rate, primarily for row crop agriculture. In 2019 alone, 2.6 million acres were plowed up across the US and Canadian portions of the Great Plains. When grasslands are tilled, soil organic carbon stocks are immediately reduced by 30% on average, releasing a vast amount of carbon into the atmosphere.

One solution that has developed over the past couple of decades, has been a rise in the practice of regenerative agriculture, which rebuilds soil health, and the ability of the soil to store carbon and water and support biological activity that creates nutrient dense food. This shift is critical for the future of agriculture, making lands more productive with fewer inputs and reducing the pressure to plow new natural areas to feed the world’s growing population. These days, it isn’t out of the ordinary to walk into a small-town café and overhear farmers and ranchers discussing soil health over coffee. Things are changing for the better.

Right now, we’re still losing more acres of grassland every year than we’re improving with regenerative practices. And we’ve learned from restoration efforts that it can take decades to centuries to restore carbon stocks to levels comparable to those found in native prairies soils. Our primary goal must be to conserve the planet’s remaining grasslands as healthy and intact ecosystems that support both wildlife and people.

To that end, WWF is employing a dual strategy of directly supporting land stewardship and getting the policy incentives right. This offers hope that these irreplaceable, complex, often underappreciated ecosystems that do so much for our planet continue to exist. We are also creating space for incorporating these types of solutions at global venues like the recent UN Food Systems Summit and upcoming global convening events like the UN Climate Change Conference (COP26). WWF supports leveraging our food system as a solution to global challenges while protecting community livelihoods in places such as the Northern Great Plains.

So I encourage you to find your way to one of our remaining native prairies and spend some time there getting to know firsthand just why they are so special. Sit among the grasses and wildflowers, allow yourself to be swept away by the sound of wind, birdsong, and bumble bee wings, and experience its “values as yet uncaptured by language.” These landscapes are becoming increasingly rare, and truly need our help to survive.

Learn More: To hear more about the critical role of grasslands in the global climate and nature agenda, join WWF at COP26 on November 9: Grasslands and Savannahs: Climate Solutions Beyond Forests at the COP26