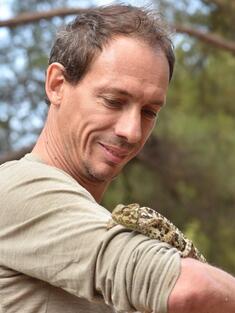 Dr. Arnaud Lyet is a lead specialist in animal population monitoring, modeling, and decision science at WWF on the Wildlife Conservation team. He has extended and practical experience leading complex biodiversity monitoring and conservation programs at regional and global scales, and is recognized for his leadership in assessing biodiversity using creative technologies such as Artificial Intelligence (AI) and environmental DNA (eDNA).

During his time at WWF, Arnaud has developed, tested, and taught innovative statistical methods and technologies to help tackle conservation challenges in a timely and cost-efficient manner. For example, he spearheaded WWF’s research on eDNA to inventory terrestrial mammals in British Columbia, the Peruvian rainforest, and Myanmar and to search for rare species like the Sumatran rhino in vast and remote tropical forests of Borneo and Sumatra. He has been actively involved in the development of two global initiatives for biodiversity mapping and monitoring, one based on eDNA (VigiLIFE) and the other on AI applied to camera-trap images (Wildlife Insights). He is also a member of the IUCN Species Monitoring Specialist Group.

In his early career as a field ecologist and a passionate wildlife enthusiast, Arnaud spent countless hours searching, identifying, counting animals in his home country of France and abroad: in particular, snakes, lizards, and turtles in the Mediterranean basin, small mammals in French Guyana, crocodiles in Venezuela.

In 1998, he had the incredible opportunity to work with one of the most threatened European snake species: the Orsini’s viper – the only viper that feeds almost exclusively on insects. He dedicated over 10 years of his life leading the teams that explored the mountains slopes of the southern French Alps to assess the distribution and ecology of the reptile and collaborating with all stakeholders in the region to better understand how to protect this unique animal.

The hard work paid off and in 2013, Arnaud published the first evidence-based estimate of the total population of this rare and endangered viper species in France, when up until then, the scientific community had to rely on rough expert guesses. Arnaud’s research found there to actually be 62,000 individuals, providing hope for the long-term conservation of this species.

When he is not at work, he is probably training in his Aikido dojo or lost in the woods looking for rattlesnakes, salamanders, or mushrooms.

“The beginning of my career studying the rare Orsini viper, endemic to the Mediterranean mountains of Europe, truly shaped my scientific career as a wildlife ecologist. It taught me there is no effective conservation without good science, collaboration, and hard work to deliver timely and accurate information to support decisions.”