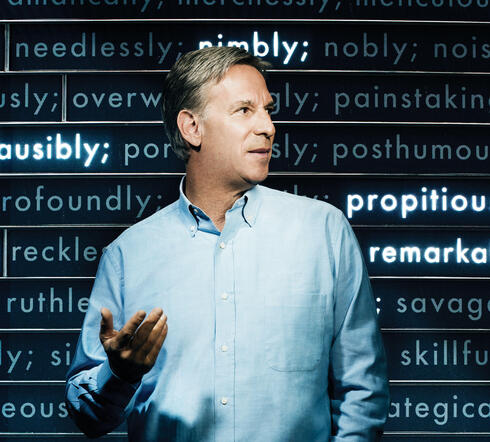 When Ralph Waldo Emerson wrote “…Who leaves the pine-tree, leaves his friend,” he wasn’t writing about Steve Luczo. But he could have been.

Growing up in Park Ridge, Illinois, in the 1960s, Luczo says, “We played outside all day long. We had a black-and-white TV, but your main entertainment was to play outside—in the yard or street, the park or forest reserve. So you were always in tune with nature. It was a great time to grow up.”

That enduring connection to the natural world has manifested itself in many ways—like calling the backyard cottonwood tree his “best friend” while in elementary school—and remains central to Luczo’s life today. “I spent a lot of time making sure that tree was happy,” he recalls. “Especially in the winter, making sure the snow wasn’t too high on it. Connections to nature, especially when you’re young, can be so emotional.”

When Luczo started at the Stanford Graduate School of Business in 1982, he participated in a getting-to-know-you session with fellow classmates where each person revealed their life goals. “I remember so clearly what I said: that I hoped to someday give animals a voice in what was happening in the world.” Fast forward 30 years to Luczo’s first meeting as a member of WWF’s Board, where he learned about the organization’s commitment to “be the voice for those who have no voice.”

“I appreciate so much the constructive approach WWF brings to everything. How can we as humanity use what we've been gifted with to address these critical issues in a more effective way so the whole world wins?”

When Luczo retired (“for the first time!”) from Seagate, the company he helped guide to international prominence as the world’s largest disk drive manufacturer, he was asked to help fund the conservation of silverback gorillas in Africa.

“As important a cause as I thought that was, when I got into the dynamics of what was causing the habitat destruction threatening the silverbacks, I realized that unless there was an economic force to counterbalance the economic force causing the destruction, we wouldn’t be able to win this game,” Luczo says. “We may delay it, which is important, but ultimately those are just equations that will run out to our disadvantage if we care about biodiversity.”

Luczo didn’t join WWF’s Board the first time he was asked, in 2002: “I appreciated the invitation, but the timing wasn’t right for me.” But the second time around, when WWF came calling with an appeal to his technology-minded appreciation for conservation, he signed on right away. “Ten years had passed, and my priorities were different then.”

“I appreciate so much the constructive approach WWF brings to everything,” says Luczo. “How can we as humanity use what we’ve been gifted with to address these critical issues in a more effective way so the whole world wins?”

As the father of three small children (and another one on the way), Luczo is doing his part to make sure the next generation understands the importance of that lesson. “When I was a kid the reality was, nothing was going away too fast. Or maybe it was, but it seems like everything is accelerating now—from species loss to deforestation.”

So there's a greater sense of urgency to make sure his kids see places like the Arctic or Africa or the Gal&aacute;pagos Islands. But Luczo is clear on this: "I don't want my kids to see these places solely for the sake of having the experience. I want them to see these places so they can begin to establish the emotional connections that will hopefully one day influence their desire to protect them."

Just like he did, starting with the cotton-wood tree in his backyard.