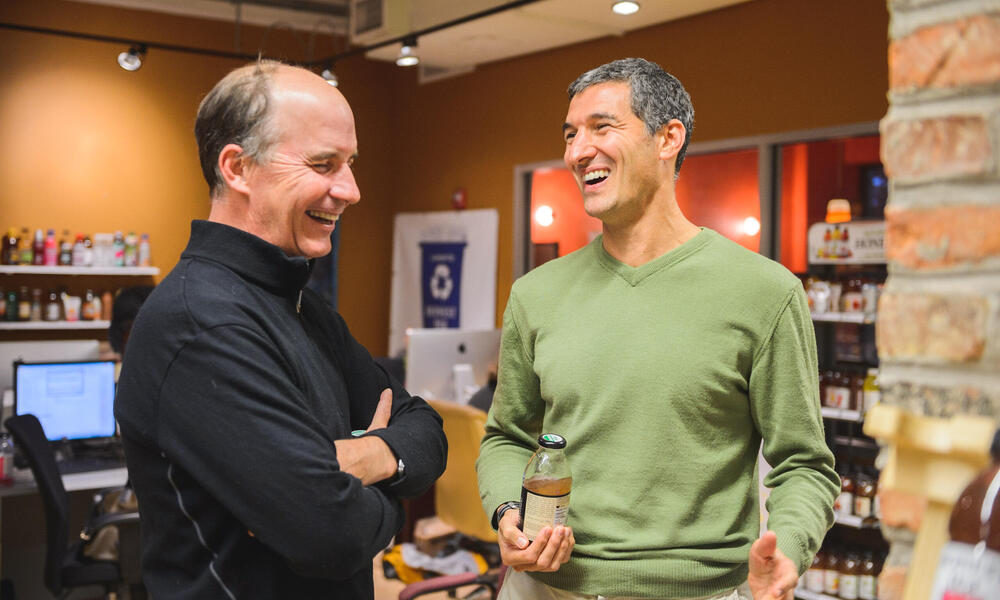 On November 4, 2013, WWF President and CEO Carter Roberts sat down with Honest Tea co-founder, President and TeaEO Seth Goldman to talk about holy basil, the importance of a strong message and what it takes to uphold a strong commitment to social responsibility while growing a business with integrity.

CARTER ROBERTS I’d love to hear about starting a company that has really pure, hard-core values. How do you stay true to those values as your company grows?

SETH GOLDMAN We started with the smallest of means, but the greatest of ambitions. We wanted to have an impact on the American diet, global agriculture and labor standards in the developing world. The first several years were all about survival and finding a model that was sustainable—and I’m using the word “sustainable” from a business perspective, not an environmental one. Eventually we got enough traction and started to click in natural foods channels, and we grew from there.

But to really answer your question, I guess honoring our values comes back to the mission. No matter how big you get, the mission is where it’s at. It’s probably the same for WWF. Our mission just happens to come in a bottle.

CR And how do you take that mission to scale? It’s a question we ask ourselves at WWF every day.

SG The most direct way to take the mission to scale is to sell more bottles. In addition, we were seeing that even as small as we were in the beginning, we were inspiring others to follow. We’d see big companies trying to do something with organics, or with reducing their packaging weight. But we thought, “Why can’t we be the ones driving the change?” We were still a very small fish in a really big pond.

CR Even small changes can deliver outsize impacts. Tell me the story of a place that’s different now because of decisions you made.

CR Why is it called “holy”?

SG Because it’s a venerable plant in the Hindu religion. We were one of the first to say, “Wait a minute, this isn’t just an herb with restorative properties, it makes a great tea when you brew it!” I visited tulsi farmers in southern India and I was so excited by the possibilities, but they were very pragmatic. They said, “We only make 14 cents a kilogram [1 kg = 2.205 lbs.] for this freshly picked herb—we can’t make a living on that.”

So we worked with the cooperative to help set up a drying shed in their community, and connected the farmers to our larger supply chain. Now these farmers sell the dried tulsi as a value-added crop for $3.70 a kilo, instead of 14 cents a kilo.

CR And what’s the market for tulsi outside of India?

SG It’s modest. But we just announced a national distribution deal with a restaurant chain with 250 outlets. And one of the offerings is our lemon herbal tea, and that’s made from tulsi. One interesting lesson we learned? When we call it “tulsi,” nobody’s interested. But when we call it “lemon herbal tea”…?

CR They go for it.

CR So, tell me: Your company’s gotten a lot bigger in the past few years. And in 2011, after several years as an investor, The Coca-Cola Company bought Honest Tea. So how do you sustain your culture and your values as you get bigger? On the one hand, your product is now on 10 times as many store shelves. But on the other hand, doesn’t this represent a challenge to a culture built out of a smaller company?

SG No, not really. I mean, for us, bigger is more impactful.

“[Change] is going to be driven by entrepreneurs who can create different approaches, and when they get validated by the consumer the big companies will follow. So people don't think they have power, but they do.”

SG Well, it’s more impactful. If we all of a sudden said, “Well, the bottle doesn’t have to be organic,” or “It doesn’t have to be fair trade,” then I would worry. But for us, there’s no trade-off in scale. Our goal is to build this brand as powerfully as we can, with these values embedded in the product itself.

CR So what’s the one thing getting in the way of scale right now?

SG It’s actually consumer awareness. How do we make consumers aware of, and interested in, our central proposition?

CR Sounds familiar. WWF is very invested in sustaining a conversation with the American public around the importance of supporting conservation at all levels. And yet getting people’s attention—and keeping it, and translating that awareness into action—takes relentless focus.

SG We both need to work to find the right message. I think our message and your message—our challenge and your challenge—probably aren’t that different. How do we get people willing to make an investment in us, when it takes more money to support an organic supply chain? Just like it takes money to protect endangered species in pristine areas, or to put solar panels on their houses.

CR Actually, the cost of solar panels has dropped by an amazing degree in the last few years. Yet making people aware of that is a challenge.

CR It is. But it still requires us to have these conversations in a way that is interesting. More importantly, how do you make them inspiring?

SG It’s become this ongoing refrain: “Where is change going to come from?” It’s not likely to come from governments or large companies, at least not at first. It’s going to be driven by entrepreneurs who can create different approaches, and when they get validated by the consumer the big companies follow. So people don’t think they have power, but they do. I mean, if we assume the marketplace is the biggest driver of change there is …

CR As long as it’s on the shelf they can make the choice.

SG Exactly. And we preach the gospel that sustainability means a sustainable business over the long haul.

CR I predict our society will go through natural resource scarcity and climate change, and both will wreak havoc on our economies and everything else. Then there will be that moment where businesses that pursued sustainability will be more in demand because the world will need what they are selling. We’re not there yet but we are getting close.

SG That’s exactly right. For the first 10 years, we had to raise 10 million dollars from investors to keep the lights on. We were not a financially sustainable business. We were growing, but we were not generating enough profits to reinvest in our growth. Eventually, we delivered a great return to our investors; everybody got their money back and then some. But to extend that metaphor to the planet, right now it’s like we’re operating at a loss. And when it comes to the planet, we’re not going to recover our losses. When it’s gone, it’s gone.

CR I will never forget a talk by Stephen J. Gould, a paleontologist at Harvard who passed away in 2002. He said, “If I stretched out my arms, and it was the entirety of time, the amount of time that humanity has been here is the shaving of one of my fingernails.” Gould went on to say, “I’m tired of people talking about saving the planet. The planet is going to be fine. It’s just going to turn into something that’s not very good for us. So we need to change our message from saving the planet to saving ourselves.”

And I think that’s such an important message to deliver. We shouldn’t do this out of altruism. We should do this because ultimately making these changes is in our self-interest.

Seth, I’m glad we’re all in this together. Thanks for your time.