President's Letter: The Art of the Opening 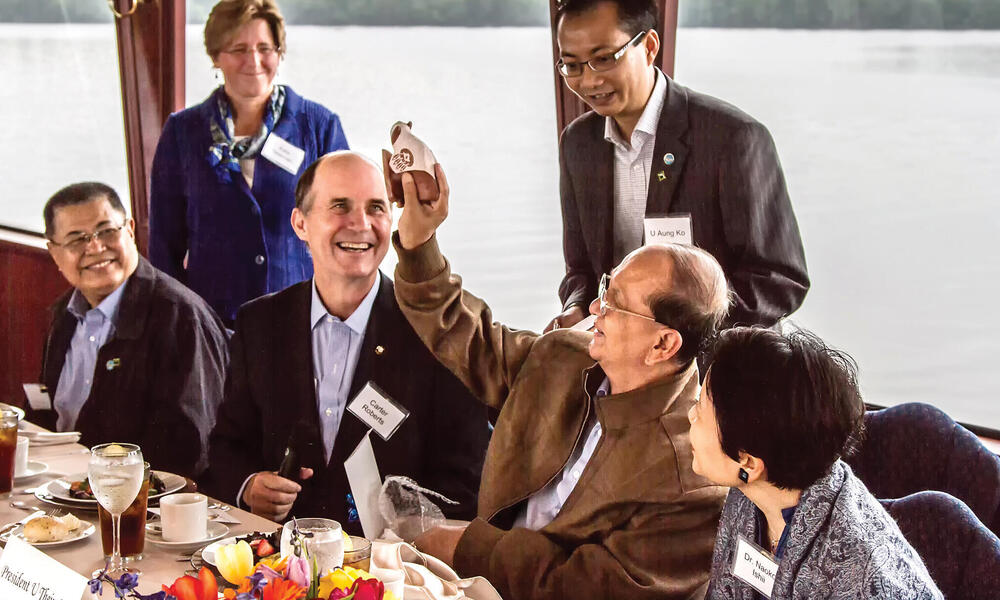 “Blessed with an abundance of natural capital, [Myanmar] represents almost unfathomable riches in terms of the value that intact rivers, forests and marine systems bring to people.”

Conservation consists of equal parts hard work, ingenuity and perseverance. Good timing never hurts. And when it all comes together as planned, it’s a beautiful thing. But making the most of unexpected opportunities—that’s when the magic happens.

Consider Myanmar, the Southeast Asian nation that just opened its doors after five decades of military rule. Ten years ago, WWF met with Aung San Suu Kyi, but because of international sanctions, determined the time wasn’t right to open an office there. But in the fall of 2012, an hour after voting with other Parliament members to pass a major new law on foreign investments, she hosted us and the Helmsley Charitable Trust around her dinner table, and argued that we needed to be there soon. She felt that our presence and technical assistance could be consequential for a country in the midst of such sweeping changes.

As Myanmar continues to ease toward greater democracy, we can be sure more opportunities will arise—for its people, its economy and its legendary landscape. Just imagine if we’d been there to help write the foreign investments law, and how it might have incorporated environmental concerns.

After being closed to the outside for so long, Myanmar is truly a gold mine of investment opportunities—it has the capacity to generate electricity, sequester carbon, mine minerals and precious stones, and produce food for export to its neighbors. Blessed with an abundance of natural capital, it represents almost unfathomable riches in terms of the value that intact rivers, forests and marine systems bring to its people, particularly the ethnic minorities that occupy its rural periphery.

I had the absolute pleasure of spending a morning last summer with Myanmar’s president, U Thein Sein, in advance of his meeting with President Obama. He asked WWF to organize a lunch for him. A quiet, unassuming man, he was eloquent about the environmental choices in front of his people, and how they could capitalize on the sudden wave of investment interest without losing what US Ambassador Derek Mitchell called “the heart and soul” of the country. President Thein Sein had studied dam construction in Europe on a recent trip, with an eye to choices that could enable him to keep the flow of rivers intact. And he knew the value of nature in making his people less vulnerable to sea-level rise and tsunamis.

WWF has had some of its great successes—our community-based conservation program in Namibia; helping to create the world’s first tribal national park—when we were able to act swiftly in the face of a singular, unexpected opportunity. Because while it may not be in our long-term plans, recognizing an opening for what it could mean to conservation forces us to look at our work through a different lens. So while establishing a new WWF office is certainly not a novelty—you can find them in more than 100 countries around the world—opening one in a country that has been closed to outside influence for 50 years certainly is.

President Obama has already paid a visit to Myanmar—and hosted its president at the White House—underscoring the global importance of the country and the region. And of course frenetic bidding is under way by businesses of all sizes as they seek to claim a piece of this untapped consumer market. So WWF’s new office is working with President Thein Sein’s office and local NGOs to support the growth of a green economy in Myanmar, guide sustainable forms of development, and set aside protected areas for one of the last redoubts for tigers in the world. Because the magic only happens if you’re willing to move fast.

I have great hopes that Myanmar’s leadership can chart a new course with the support of WWF and others and become a model for sustainable development in the face of the kinds of massive investments we see throughout the developing world. I also hope Myanmar will be an example writ large of what’s possible when conservation moves as quickly as the ever-shifting landscape of opportunities around us.