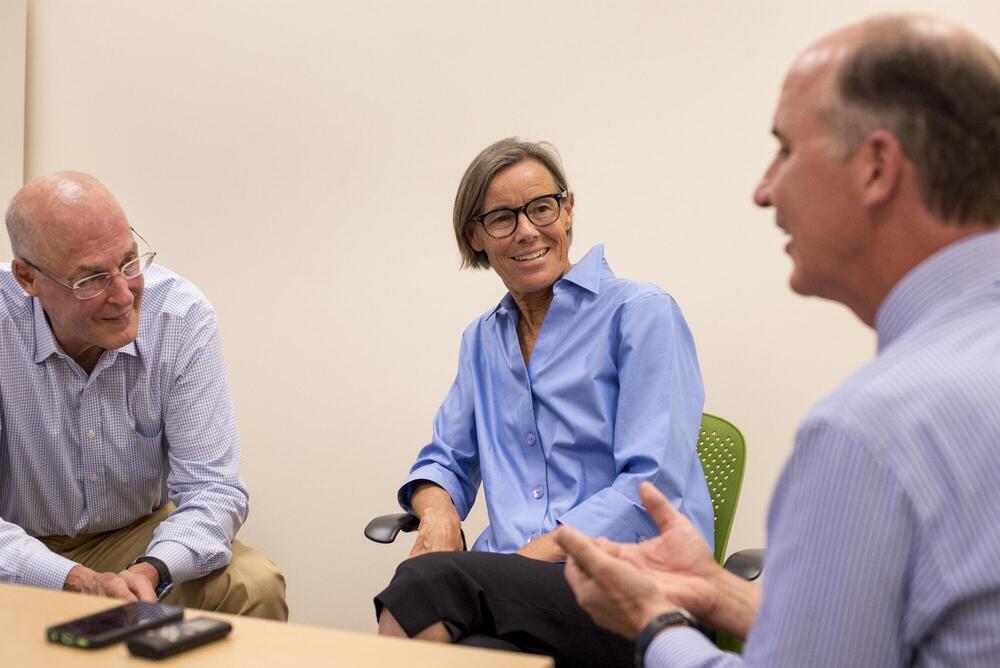 On September 8, 2015, WWF president and CEO Carter Roberts sat down in Chicago with conservationists Wendy Paulson and her husband, former treasury secretary Hank Paulson, to learn more about when nature first clicked for them, the power of community, and the importance of knowing your ecological address.

Carter Roberts Each of you have such a profound, visceral connection to nature. What was the first moment where you realized you were hooked—where it just clicked for you?

Hank Paulson I always loved nature, but the need for conservation clicked for me when I became aware of the fragility of nature and how easily it could be destroyed. And this realization was driven home by the extinction of species. I remember in grade school writing a report about the passenger pigeon, the Carolina parakeet, and the ivory-billed woodpecker. And that had a profound effect on me, that man could destroy these beautiful creatures.

Wendy Paulson For me it started with Olivia Petway, my seventh-grade teacher. She taught us about the Great Dismal Swamp and just captured my imagination. And then when I was in college, I heard that a conservation group had saved the Great Dismal Swamp, and that was the first time it clicked to me, “Oh, you can actually save places.”

CR Absolutely. Legacy is no small part of our work—leaving something behind that’s bigger than ourselves. And we need ambition. Can you each describe a project that epitomizes what you think conservation groups ought to be doing more of?

WP My favorite example is the grassland restoration work going on in Barrington, Illinois, where we have had a home since 1975. The local conservation group, Citizens for Conservation (CFC), is the best example of a community-based conservation group I know of. They offer opportunities for anyone, of any age, to get meaningfully involved in learning about and caring for their local landscapes—in becoming active stewards of their natural treasures. The results are impressive and have received widespread, even national, attention. Locally, CFC is integrally involved with the schools, with civic groups, and with public land agencies. It is regularly covered by local and regional publications. That is a model that every community can and should strive for.

CR I knew you were going to start with community response!

WP I know, I can’t help myself—I just believe so strongly in the power of community.

HP I think right now conservation is winning a lot of battles—some of them smaller, some of them bigger—but losing the war. We’ve been treating nature as an inexhaustible resource, and that doesn’t work. So I’ve become convinced that, although it takes civil society and nonprofits working with government and business to get things done, the root cause of our problems is flawed government policies. Policies that, quite honestly, were probably always flawed, but we were able to live with them in the past. We can’t now. And so I’m increasingly interested in advocacy to change government policies.

Take China for example. Half of all the buildings going up in the world are in China. And 40% of all carbon emissions come from buildings, and China is now the largest emitter of carbons. If you do some relatively simple things about energy-efficient buildings, you can make a very big difference in China. And so that’s an area where the Paulson Institute is focused, through our US-China CEO Council for Sustainable Urbanization.

CR Most of us get involved in conservation because of landscapes or seascapes that we love—places that feed our soul. But increasingly we’re being asked to straddle both of the worlds you’ve just described: supporting communities at the most local level, and engaging the biggest drivers of environmental destruction. And the truth is …

WP You need both.

CR You need both.

WP And you´ll do better, ultimately, if you have what I call “ecologically intelligent leaders.” That has to be the case early on. You need leadership that understands the importance of integrating the environment into everyday decision-making.

CR When you hear the word “conservationist,” who do you think of first?

HP I think of Teddy Roosevelt.

CR Leadership matters, no matter where it comes from. If you knew somebody who was about to become the CEO of a major conservation group, what advice would you give them?

HP That every issue is a people issue. The key question to answer is, “How do you get things done?” And the answer is people. How do you assemble the best possible management team and then how do you influence people, how do you engage people, how do you convince them to do the right thing. Political leaders respond to their constituents, so environmental advocacy is more effective if it has broad-based support.

HP Right, it goes both ways. Every time Wendy and I get involved in something, we ask ourselves, “Is someone else already doing this?” If they are, we should spend our time and money elsewhere. We always want to be sure we’re collaborating in an intelligent way.

WP I would add that to the extent leaders can provide avenues for people to become engaged in a meaningful way, it is tremendously powerful. People all over the world care about their communities. They care about the beauty that they recognize in their home region, or their home country. But so often they have no way to do anything about it.

CR Right. Either they’re disempowered, or they don’t know where to start. So let me ask: What gives you hope?

CR So when you see Henslow’s sparrows back in places where they haven’t been for years, like the prairie or your backyard...

WP I feel very hopeful about our ability to accomplish good things for the planet.

HP Something else that gives me hope is young people. Because when you look at our society at large, many of those who care about the environment don’t rank it among the top two or three most urgent issues we face, yet saving our planet is the ultimate issue of generational fairness. So it is not surprising, and is in fact very encouraging, that younger people all over the world are increasingly understanding that environmental issues are top-of-the-list important.

WP I’d also add that the inborn capacity people have to care for and love the place where they live gives me hope. I am so heartened when I go to China and meet people who are very low on the economic scale, but care so much about their natural environment. For example, there are communities where they’ve watched the black-necked cranes coming to their area for years, for generations—and they want that to continue.

CR In the previous issue of this magazine, I wrote about conservation and kids. And I’ve seen it when I speak at my kids’ schools—kids care deeply about animals and nature and their communities. But unfortunately some of them, when they become adults, they forget.

WP Something I’ve been talking about a lot recently is the importance of “knowing your ecological address.” As much as kindergartners should know their street address and their phone number, they should also know what watershed they come from, what ecological system they come from, and who their wild neighbors are. And then they start to learn how interconnected everything is, and the value of preserving the ecosystem. No one works to save something they don’t understand or value.

CR In so many moments over the years you’ve played an important role in my life and in my work—both at The Nature Conservancy and WWF. It meant the world to me for you to be involved in such a pivotal role in WWF’s Amazon initiative in 2014. And I would be remiss if I didn’t thank you for all you’ve done for the larger conservation community, and all you’ve done for the world we leave to our kids.