Larry Linden on why checkbook philanthropy isn’t for him 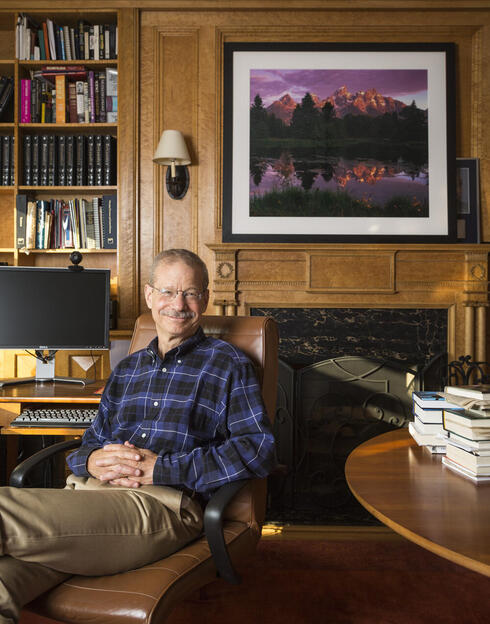 He worked for Goldman Sachs for many years, became a partner, was a leader of Goldman’s global expansion through the 1990s, and guided their Y2K transition plan. And when the company went public in 1999, he began considering what his next move should be.

“I’ve always been one who has been very grateful to the others on whose shoulders I stood—those who created our great country and gave me so many tremendous opportunities,” Linden says. “And so when I realized I had some financial freedom, I said to myself: It’s my turn to do something. And so I decided to leave Goldman, and get to work on slowing down the rate at which we’re destroying the planet.”

This wasn’t grandiose verbiage or a pie-in-the-sky proclamation. This was an idea that was a long time coming.

Like most little kids, Linden spent a lot of time outside when he was growing up in the 1950s in Pasadena. Just north of his elementary school was the San Gabriel Wilderness. “After school I would go up into the wilderness and spend the latter part of the afternoon traipsing through the forest,” Linden recalls. “My family also went camping in Yosemite and had all those other great California nature experiences.”

Pasadena is on the eastern edge of the Los Angeles Basin, and in the afternoons it was extremely smoggy. As Linden remembers it, the air was brown and hazy, stinging his eyes and making breathing painful. When the air quality was bad enough, recess was canceled.

Around this same time, scientists at CalTech in Pasadena figured out that the pollutant at fault was ozone—whose creation was driven by sunlight that energized a reaction of hydrocarbons and nitrogen oxides from oil refineries and automobile exhaust. This discovery led California to implement some of the nation's earliest air-quality control measures.

“These experiences have informed my whole life, my relationship with WWF, and a lot of other things,” says Linden, “like the topic of my master’s thesis, which was air pollution from jet engines. Or the fact that, when I was a young Air Force officer, I wrote one of the first environmental impact statements, on the B-70 bomber.”

But back to Linden’s goal to help heal the planet. About six months after he determined to shift his focus in that direction, Linden received a call from Jim Leape, who at the time was in charge of conservation programs for WWF-US. “He said they were getting ready to launch a program to help save very large parts of the Amazon, and that the project would be two hundred times larger than anything they’d ever done,” Linden explains.

“For my whole life I will be incredibly grateful to all who mentored me, and in particular the folks at World Wildlife Fund who drew out my ability and gave me the opportunity to help save the planet— exactly what I wanted to do.”

Larry Linden
WWF Board of Directors

“They were looking for someone from the private sector who had experience running multi-hundred million-dollar projects to advise them, and I’d been recommended. Was I interested?”

“I never wanted to be a checkbook philanthropist,” Linden says. “I saw this as a career change and so wanted to add real value beyond just giving money—although I did give money, because I knew it was important. But going in to WWF and saying, ‘I’ve worked at Goldman Sachs, please step aside while I save the day,’ would have been arrogant and also just erroneous. I knew I had a lot to learn.”

And so he continued taking calls from Leape. He traveled to Brazil many times, and ultimately signed on to help design what became the Amazon Region Protected Areas (ARPA) program. And through Linden’s work over the years on large-scale conservation projects in Canada and Costa Rica, as well as Brazil, the model that has come to be known as Project Finance for Permanence, or PFP, took shape.

PFP’s purpose is to ensure that a protected area system, once established, has the funding and other attributes needed to maintain it in perpetuity. Adapting a Wall Street-style approach to financing and closing large deals, PFPs call on investors to pledge to contribute based on a detailed financial and conservation plan. No funding is handed over until all conditions necessary for closing the deal have been met.

Stars aligned, and thanks to the involvement of Linden and many others, ARPA went on to become successful beyond anyone’s wildest dreams. When the $215 million, 150 million-acre project closed two years ago, it was the largest single tropical forest conservation project in history.

As far as Linden is concerned, the stars aligned for him, too. “I just can’t believe my luck,” he says. “I have some skills behind this, but for my whole life I will be incredibly grateful to all who mentored me, and in particular the folks at World Wildlife Fund who drew out my ability and gave me the opportunity to help save the planet—exactly what I wanted to do.”