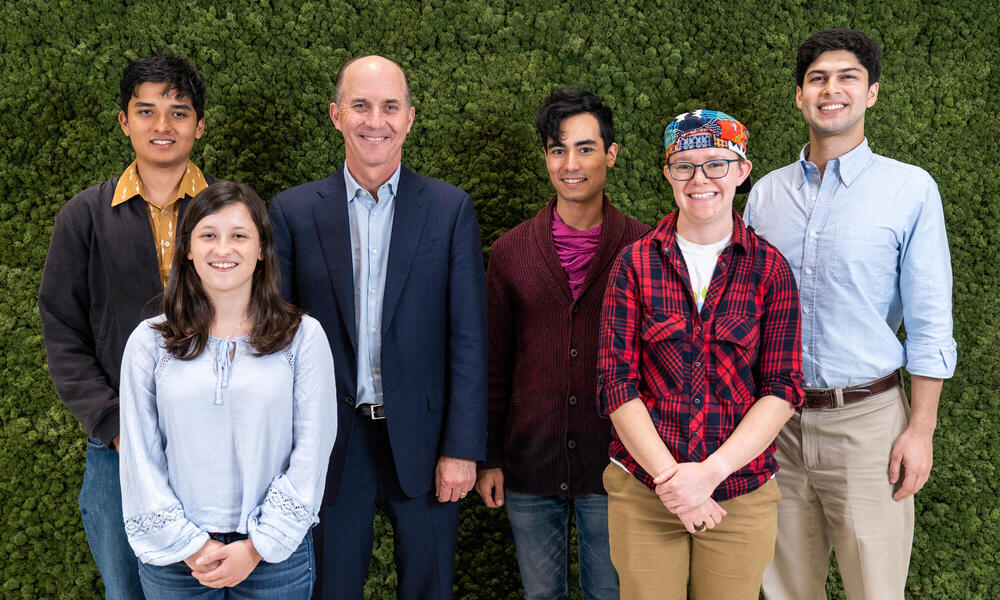 In August 2019, a group of Princeton students traveled to Sumatra, Indonesia, to visit an ecosystem restoration concession within the Bukit Tigapuluh (Thirty Hills) landscape, which is managed by WWF-Indonesia and partners (Frankfurt Zoological Society and The Orangutan Project) as a commercial enterprise. The goal of the project is to protect and restore one of the last large blocks of dry lowland tropical forest in central Sumatra—critical habitat for Sumatran elephants, tigers, and orangutans—while also generating revenue to sustain the work and improve the livelihoods of local communities. Late last year, WWF president and CEO Carter Roberts sat down with the students to hear their story.

Pictured above are (left to right) Arjun Krishnan, Zoe Rennie, Carter Roberts, Josh Faires, Luca Kuziel, and Arjun Potter. Will Conte, who was also on the trip, was unable to attend.

CARTER ROBERTS Welcome to WWF. It’s great to meet you after hearing so much about all of you. Tell me about yourselves. What are you all studying?

ARJUN POTTER I’m studying the biology of large mammalian herbivores—the diets of elephants and zebras, that sort of thing.

JOSH FAIRES My thesis examines how queer spaces are shifting in the UK. My focus is on assimilation and the connections to why queer spaces are disappearing. And that connects to conservation because the draw to assimilation, to mainstream life, has environmental implications as well.

CR Indeed, if our work is about conserving the diversity of life, including Indigenous cultures, sameness and assimilation are often signs that we are not succeeding in our work.

The place you all visited is spectacular, and we’re doing something pretty special there—we don’t normally engage in a 60-year ecosystem restoration concession in a place where governance is not very strong and try to make a go of things. It’s kind of a mash-up between a traditional forest concession and a protected area. What were your impressions of what we’re trying to do there?

AP One thing that struck me from the start about how WWF does things in Sumatra is how much people are willing to think outside the box and try new things. I definitely see how there are tried-and-true strategies in conservation, and what I’ve seen in Thirty Hills is a way to build on the strategies that work, and then also incorporate new ones that are promising.

CR Right. I mean, this is a hard, hard thing to do.

AP It is. And in general, we know that land sparing tends to work better than land sharing. But there are ways to make land sharing work. It’s very context dependent. And some of what we saw there, like the honey harvesting done by the Talang Mamak community, is a windfall for people and for biodiversity. It’s extremely hopeful.

CR Technology is playing a bigger and bigger role in conservation. Tell me about the drone you used during your time in Thirty Hills. What was it for?

JF We had two uses for the drone. The first was to watch the honey harvesting. We wanted to get as many shots as possible because it was only happening once while we were there. We had a GoPro on one of the community members, and we had one person recording on the ground with a traditional tripod and camera. The second use of the drone was to record footage over a herd of elephants, but we ran into some technical difficulties.

CR So, who was on the ground with the traditional tripod?

ZOE RENNIE That was me. I was trying to situate myself in front of the hive so I could get a good shot. I stayed there for a few minutes while the bees were swarming, and then the bees got really agitated and started to fly toward us. And that’s when I had to get out of there.

CR So, you were the one who stood your ground initially when the bees started swarming?

ZR Yep! Everyone else bailed. [laughter]

CR Let’s talk about communities now. They ’re at the heart of everything WWF does. There are two Indigenous tribes that live in and around WWF’s Thirty Hills concession—the Talang Mamak and the Orang Rimba. Kuziel, you were fortunate enough to meet and interview members of both tribes. What did you learn?

LUCA KUZIEL When we first got there, one of the things that we got to see was them making handicrafts, making non-timber forest products to make a living out of something that wouldn’t be so destructive for the rain forest. It was interesting to see how they were coming up with new ideas to be self-sustaining.

I felt like that was important, for a local community to have independence and also be in a partnership with a bigger entity that has a global voice, like WWF. It’s allowing them to grow but also giving them the support and resources they might need in order to achieve that self-empowerment. I felt like that was really strong there.

“What I’ve seen in Thirty Hills is a way to build on the strategies that work, and then also incorporate new ones that are promising. ”

ARJUN KRISHNAN We also got to interview a man named Fahmi about the community’s relationship with tigers. They felt a deep connection with tigers as a part of who they were, as part of their identity as members of the Talang Mamak. He talked about it in such a heartfelt way. And that was cool, because it meant they didn’t see tigers as something antagonistic; they wanted to grow alongside them and have them as a part of their culture and their identity.

I loved learning about how the community can have the opportunity to support themselves sustainably, and also meet an internal need for that connection to their cultural identity. And I think that’s something that a lot of developing communities around the world have to struggle with, because they don’t want to cause destruction to the environment around them, but they need to make a living for themselves.

CR We’ve learned in our work that there’s not just one monolithic community—there are different, important voices in each community. So when you’re trying to get something done, who do you listen to? Who makes decisions? Did you see that dynamic in Thirty Hills?

ZR We got to hear from a lot of different voices in the community. The leadership structure established in the village didn’t overshadow the needs shared by everyone in the village, and people seemed to have a mutual understanding of the importance of living with the health of the forest in mind.

CR Here’s my last question: What was it like for you to travel together?

AK So much fun. I think we all learned a ton.

LK We were very patient with each other and understanding of our unique strengths and backgrounds. And I think we all added different things to the project. It’s kind of a microcosm of how conservation should ideally work, when you have partnerships between people who bring different strengths and ideas in service to a common goal.

CR Perfect way to end. Thank you for your time and your hard work. It was great to meet you all.

FRAGILE PARADISE An aerial view of Thirty Hills, Sumatra, where WWF and partners are working to protect and restore natural habitats and traditional ways of life.