In Fiji, a long-awaited survey of the Great Sea Reef offers new insights 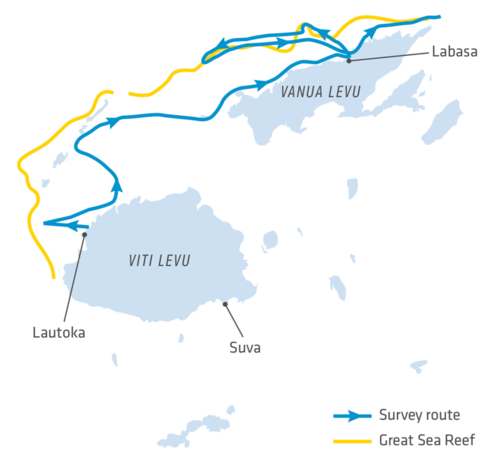 As the Bai Ni Takali pulls away from the small city of Lautoka, on Fiji’s largest island of Viti Levu, it cuts through water the profoundest shade of blue. Most days, the boat (whose name means “protecting the ocean” in Fijian) carries supplies on behalf of the government to remote islands within Fiji. But on this September morning, it sets out on a singular mission: The 14 researchers onboard will survey the Great Sea Reef, the third largest barrier reef system in the world.

The 162-mile-long reef, which snakes through the Pacific Ocean to the northwest of the island nation, has been studied much less than the larger and more famous barrier reefs of Australia and Central America. It was last surveyed in 2004, when researchers from WWF-Pacific explored its northern stretches. Now, WWF and Fiji’s Ministry of Fisheries, with support from the University of the South Pacific, have put together a team of divers to survey the entire reef system over the course of 20 days.

As the boat makes its way toward the first survey location on the southern end of the reef, marine scientist Dominic Andradi-Brown from WWF-US, Tomasi Tikoibua from the university, and Apolosi Cokanasiga from the fisheries ministry consult on the day’s dives, preparing dive sheets, checking GPS coordinates, and studying maps.

The Great Sea Reef, a priority for WWF’s Global Coral Reef Rescue Initiative—which focuses on climate resilient reefs and communities that depend on them—harbors around 40% of the known marine flora and fauna in Fiji and supplies as much as 80% of the fish caught for the domestic fisheries industry. But this important ecosystem faces threats from overfishing, climate change, and pollution from unsustainable agriculture and other land-based activities.

Supported by funders including The Henry Foundation and the David and Lucile Packard Foundation, WWF is aiding the Fijian government and local communities in their efforts to establish a network of marine protected areas that will cover 30% of the country’s waters by 2030.

The Great Sea Reef survey will inform this work. 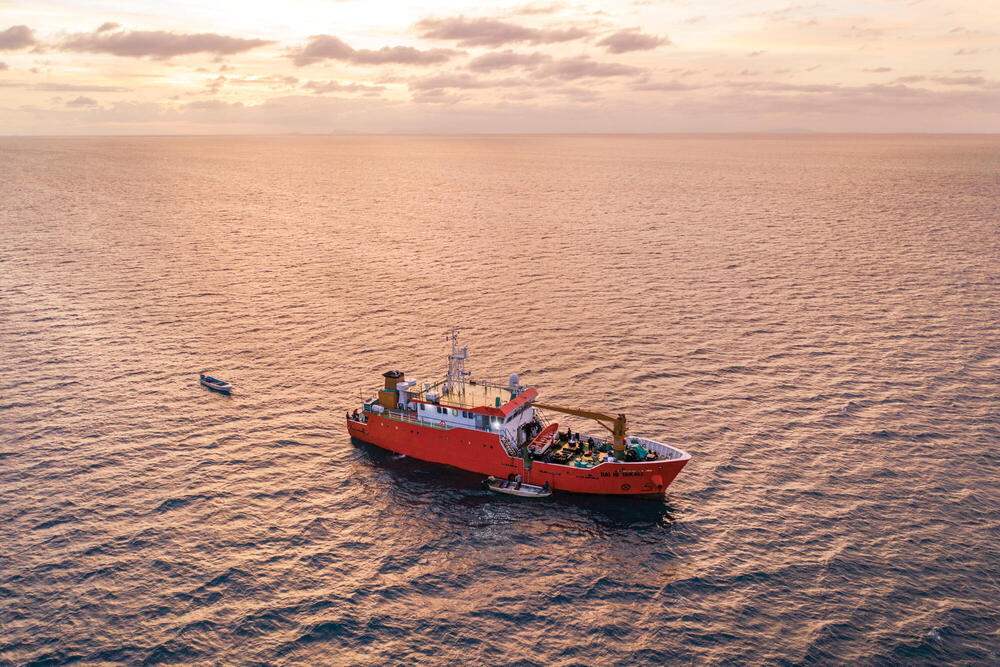 The Bai Ni Takali, a vessel owned and operated by the government of Fiji, was used for the 2019 Great Sea Reef survey. 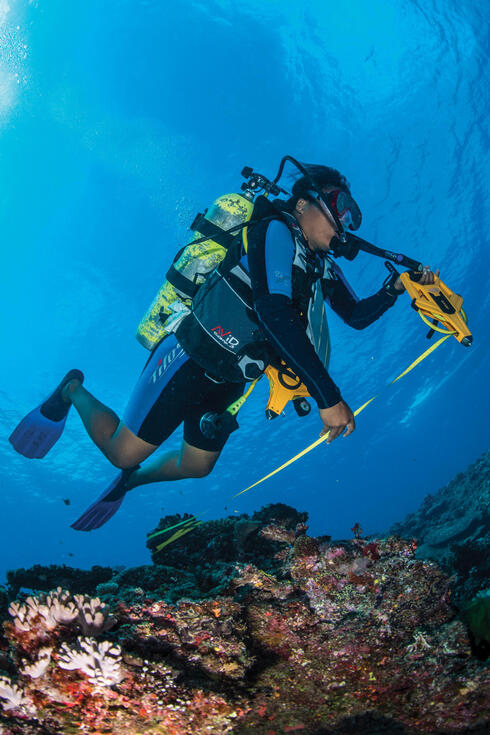 Rosemary Dautei, from the University of the South Pacific, lays tape for a survey near the Yasawa Islands. Scuba diving equipment allows researchers to survey at a depth of 30 feet, and transect tapes are used to create a standard survey area.

When the Bai Ni Takali reaches the first survey location about five hours later, local fishers, who are intimately familiar with the reef, ferry the researchers to the dive sites in skiffs. Pumice rafts—floating volcanic rock produced by the eruption of an underwater volcano—surround them. The sky is blindingly blue, but it sounds like a torrential rainstorm as the boats collide with small pumice stones on the water’s surface.

It’s the first of the day’s three dives, and the visibility is good. Over the course of the next hour, researchers observe the general health of the ecosystem and document three critical parts of the reef: seabed (coral, algae, sponges), fish, and invertebrates (such as sea cucumbers, giant clams, and crown-of-thorns starfish). Recording data on underwater slates, they focus on species that are ecologically and economically important.

Plant-eating fish, for example, play an important role in maintaining the balance between algae and corals. The fish have little market value but are eaten locally. Larger fish, such as grouper and snapper, are highly desirable at market, and are often sold to support community livelihoods. Sea cucumbers are collected and dried by villagers before being sold for export to Southeast Asia.

Back on the boat, findings are entered into a web-based tool called MERMAID (Marine Ecological Research Management Aid). “Each data collector has to enter their own data,” says Andradi-Brown. “Otherwise, there’s no way we would understand each other’s notes!” Developed by WWF and the Wildlife Conservation Society, MERMAID stores and “proofreads” the data, eliminating errors and inconsistencies and saving researchers valuable time.

Signs of trouble and hope

Several days later, researchers drop into the water on the outer barrier reef. Below, common whitetip reef sharks hug a wall of coral that plunges hundreds of feet into intense blue depths. Suddenly Andradi-Brown scribbles on his dive slate “large shark—not a reef shark,” and points down the edge of the wall. Seconds later, a mature bull shark, maybe 6 feet long, swims past, eyeing him. As the researchers start unspooling their transect tapes along the top of the reef, Andradi-Brown glances nervously over the edge of the wall, where the bull shark patrols below.

Shark attacks here are not unknown, and local fishers are at particular risk. They often fish at night, free diving and hand spearing their catches as they hold their breath for minutes at a time. It’s dangerous work.

An outbreak of crown-of-thorns starfish, which grazes on corals, can decimate reefs in days.

Anemonefish live in a symbiotic relationship with the anemone (a close relative of corals) in which they hide.

WWF-Pacific community development officer Metui Tokece knows the dangers well. He grew up spearfishing around the islands. But what concerns him more today is the absence of the fish known as giant sweetlips. “We used to spear these at ankle depth,” he says. “But now we only see them at a depth of 10 meters.”

In Fiji, communities hold customary management rights to local fishing grounds called qoliqoli; it is their right to create protected areas or bar outsiders from fishing. But parts of the reef are commercially exploited for live reef fish, and illegal fishing has contributed to dwindling fish populations.

Tokece points to another troubling finding: silt on the reef near the coast. In many places on the islands, native forest has been cleared to make way for sugar cane and pine plantations. Unsustainable agricultural practices, such as planting up to the edge of rivers, mean rain washes soil downstream and into the ocean, where it settles as sediment on the reef and smothers corals.

Yet the researchers find signs of hope as well. There are no major outbreaks of crown-of-thorns starfish, coral predators that can decimate reefs when their populations grow unchecked. And though there is some evidence of coral bleaching, the reef has not experienced the mass bleaching events that have destroyed corals elsewhere. “For bleaching to occur, you need a combination of high temperature and bright sunlight,” Andradi-Brown explains. “Fiji typically faces high temperatures during cyclone season, when it’s cloudy and stormy, which may have helped spare Fiji so far.”

Midway through the expedition, researchers visit a protected area on the island of Mali, where they meet Henry Koliniwai standing watch over the Mali qoliqoli from the vantage point of a guardhouse.

“We built this house in 2016 to stop people from outside of Mali Island from fishing here,” he says.

Today Koliniwai is a Dau ni Vonu—a guardian of turtles—but he was once a turtle hunter.

A fishing line is tangled in a sea fan’s branches.

Fiji is home to five of the seven sea turtle species, and turtle meat is a traditional staple. Once consumed only at special events like weddings or funerals, the meat over time became a common food item, its consumption contributing to dwindling turtle populations. Today, turtle species here rate a place on the IUCN Red List, with the loggerhead listed as vulnerable and the hawksbill as critically endangered.

In 1995, the Fiji government imposed a temporary ban on turtle harvesting; in 2008, WWF successfully pushed for a 10-year moratorium, during which harvesting was allowed only by permit for special occasions.

Now, says WWF’s Tokece, the communities are the ones leading protection efforts.

Koliniwai says he does this work so his children and grandchildren can have turtles around them, and he’s happy to see the impact he and others are having. “Before, when my father and I went fishing, we saw very few turtles,” he says. “Now, we see a bit more.” 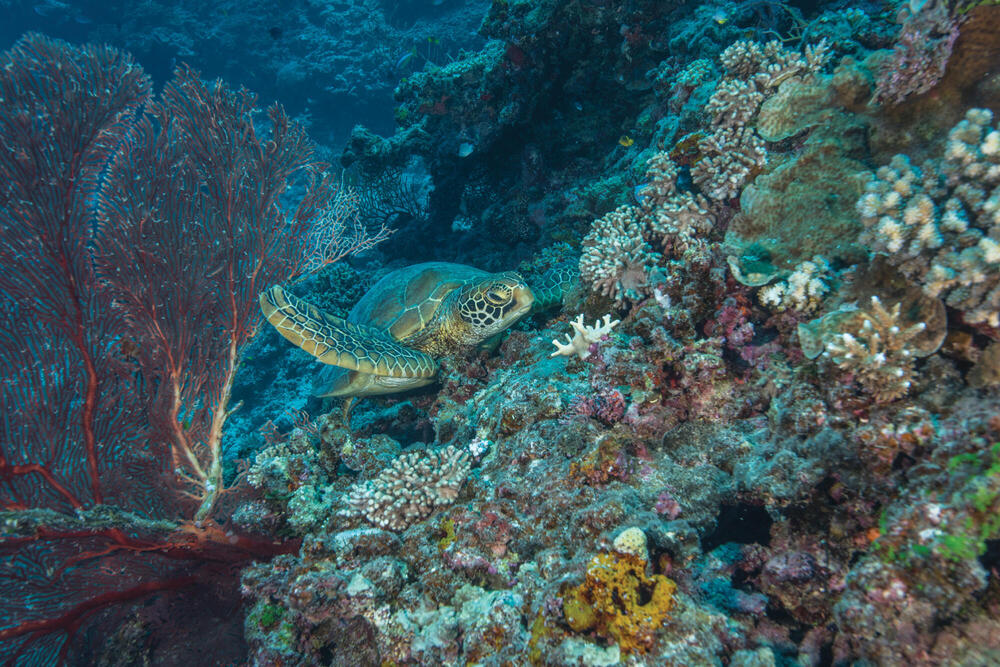 An endangered green turtle swims along the reef.

Several evenings later, the crew and researchers sit in a circle on the boat’s lower back deck. As the sun sets, half a coconut shell filled with kava—a slightly sedative plant-based drink—is passed around. Each person claps once before receiving the shell and thrice after taking a sip. They reflect on what they’ve seen during the dives.

The expedition is nearing its end, and a few things seem clear to Andradi-Brown: Given the existence of the qoliqoli, the framework for implementing strong community conservation plans in Fiji already exists. And the survey, with its diagnosis of reef health, will provide the foundation for the hard work ahead.