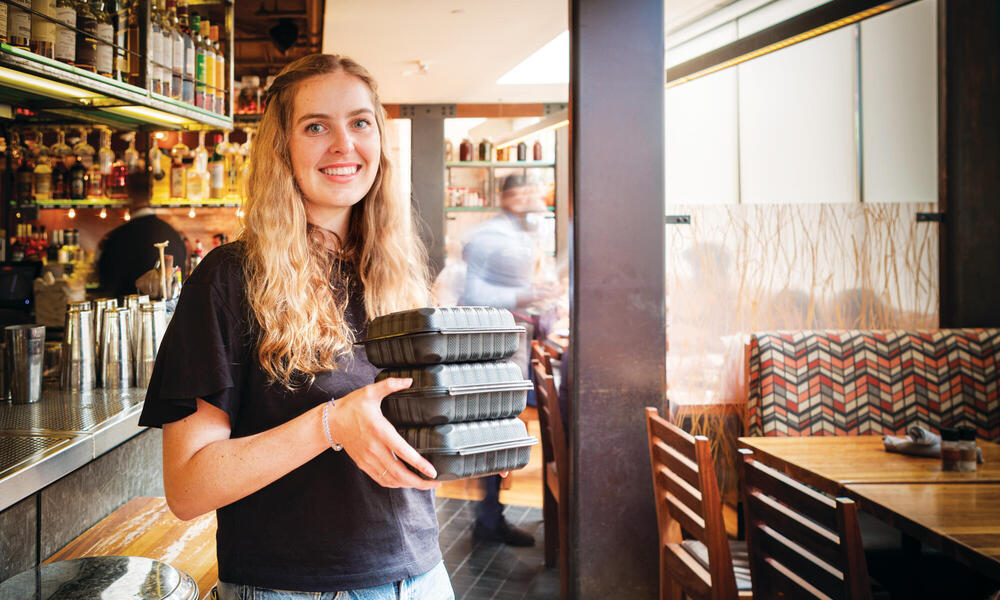 In her first week as an intern on WWF’s Food Waste team, Erin McGeoy was dismayed to learn that only 10% of surplus food is being recovered in the foodservice and restaurant sector. That translates into about 1.5 billion wasted meals per year, and contributes to the 66 trillion gallons of water and 5.4 million square miles of land that are used annually to produce food that goes uneaten.

That fact also hit close to home because at college she often went to bed early simply because she couldn’t afford three meals a day and sleep helped assuage the hunger. A Division I athlete, McGeoy managed to cover The George Washington University’s hefty price tag thanks to a combination of academic and athletic scholarships and financial aid, but had little to spend on food once her housing and other expenses were taken care of. “At a school like GW, I thought I was the only one who struggled with hunger,” she said. It turns out she wasn’t alone. Nearly 40% of students at GW face food insecurity, and that number is even higher when you look at all colleges and universities in the United States.

This sparked an idea: What if there was a way to combat both food waste and food insecurity with a single solution? From this, Last Call was born.

Last Call is an online platform that McGeoy created with fellow WWF intern Chloe King that connects college students with discounted, unsold meals from local restaurants and on-campus dining halls. Instead of tossing uneaten food in the trash, these eateries offer nearby college students the excess food— typically for $5 or less—so they can nourish themselves more easily and focus on what really matters: school. Restaurants win too, by recouping some of the costs incurred when excess inventory is discarded. And, of course, less food goes to waste.

Last Call was launched on GW’s campus in February 2019 and has already served hundreds of discounted meals to students. McGeoy plans to expand the model to universities throughout the country, relying on passionate and vocal students and faculty to help grow the program. “My hope is to encourage college students to talk more openly about the issues of food waste and hunger, which we’re trying to combat with Last Call in an efficient and mindful way,” she says. “Nobody should be worrying about where their next meal will come from when so much food is going to waste.”