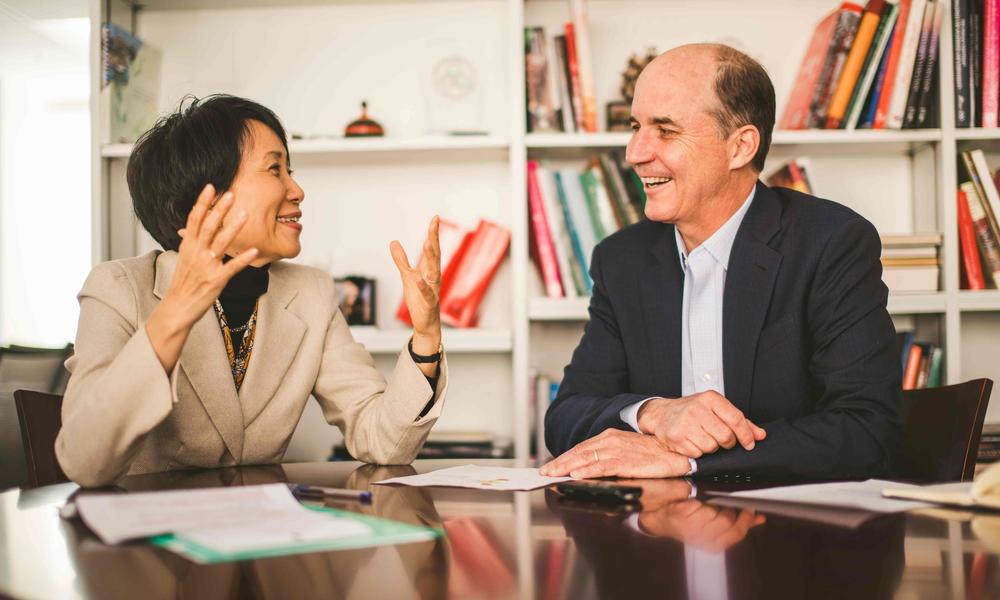 On February 24, 2015, WWF President and CEO Carter Roberts sat down with Dr. Naoko Ishii, CEO and chairperson of the Global Environment Facility (GEF), to talk about the value of leaving a legacy, why change takes courage and why bankers make smart environmentalists.

CARTER ROBERTS You come from a background in finance and banking—more than three decades, including as Japan’s deputy vice minister of finance. And now you head up the largest environmental financing institution on Earth. What made you decide you were interested in running the GEF?

NAOKO ISHII Right. I started my career in 1981 with the Ministry of Finance of Japan. I spent half of my career at the International Monetary Fund and The World Bank and those kinds of financing institutions, and the other half of it with the Japanese government. So, for about 30 years, I was mostly working on finance and development. And it was in those three decades that I gradually came to understand the critical linkage between development and the environment.

Nature is revered in my culture [Japanese]. It permeates everyday life—both the banal and the sacred—and there came a point where I realized with much nervousness that nature might not be around us anymore. I think the turning point came with the concept of planetary boundaries.* Understanding that the way we are living is really undermining the ability of humanity to prosper was the moment I realized why nature is so precious.

It was about this time that the opportunity to be considered for the GEF chairmanship presented itself. But I thought, why me? I’m not an environmentalist, I’m not a conservationist. But precisely because I would be coming in with a totally different background I came to realize I could bring the worlds of international development and finance together for the benefit of the global environment. And I really do think the work of the GEF can help change the world. So I decided to devote the last several years of my career to this cause.

CR Someone asked me once about our work, and I said it’s all about legacy. When you die, you want to feel like you’ve left something behind.

NI Absolutely. It’s arguably one of the best things the GEF and WWF—and Brazil, of course—have done together. Along with, perhaps, our partnerships to improve governance on global tuna fisheries in the high seas, the Coral Triangle Initiative we launched, and many others.

CR Which leads to my next question. About four years ago, the GEF decided to invite nonprofits to become project agencies—the entities that work between the GEF and recipient countries to facilitate GEF-financed projects. What led to that decision? I should note that WWF is proud to be the first nonprofit to have achieved project agency status at the GEF.

NI Because everyone who can help, should. There is so much work to be done, and with such urgency that no one agency or organization or even government can do it all. When we work together we accomplish so much more. We also wanted to give recipient countries more choices in terms of agencies with which they could work, so inviting nonprofits on board as project agencies seemed like a good idea.

CR We are going through a process right now within WWF of establishing new goals for our global network. When that’s done, we’ll recommend institutional changes that will allow us to get after those goals in a big way.

And at the heart of these changes is the conviction that, unless we lift our eyes from the places we cherish and look at the big systems of the world—governance, commodities markets, financial flows—we are going to fail. You come out of one of those worlds. Now, you lead the biggest institution in the world that funds solutions to environmental challenges. So when you look at an environmental problem, how do you look at it differently because you’ve been a banker all your life?

“I’m not a conservationist. But ... I came to realize I could bring the worlds of international development and finance together for the benefit of the global environment.”

NI Well, speaking as a banker I would say that the fundamental problem we’re facing is that natural capital doesn’t yet have a price tag. Therefore, there’s no market value placed on so many of the services nature provides to us. So people don’t have a monetary worth that they can place on nature and use in their decision making. So the challenge is this: How can we create either the mechanism or the condition so that our decision making can fully account for the value of natural capital? We know there are several different ways of doing that.

In terms of climate change, of course, putting a price on carbon is the most logical, but has proven quite difficult to accomplish. For nature in general, water funds are a good example. There are several models, but the basic framework is that water users contribute utility fees into a central fund, and the earnings are directed toward conservation or restoration of key lands or watersheds that provide users with their supply of water.

Unfortunately, mainstreaming the valuation of natural capital is much more difficult. I think the best way is through the government, through public investment. There are a lot of good examples where decisions about how to invest public funds have been changed once they incorporated natural capital.

CR Yes, exactly—natural capital valuation was a fundamental part of the recent Brazil ARPA deal that we did. It was because Brazil realized the value of keeping their forest intact that they were open to financing it at a scale that matters.

CR We believe that valuation of natural capital should be fundamental to every large-scale project we do. We have our sights set on replicating the type of project permanence work we did in Brazil through ARPA, around the world—country by country, starting in Peru. We’re also working on something similar in Bhutan.

Switching gears a bit, let me ask you about the evolution of the GEF. The institution as we know it today came out of the Rio Conference, 25 years ago. How is the GEF different now as a result of all the changes in the world?

NI I remember thinking, when the GEF was first created, that it had such a beautiful mission—a recognition that nature and human beings are sharing Earth’s ecosystem, and people must work together to protect it.

And particularly for human beings to continue to be prosperous, we need to find a way to work with nature. Because in the past half-century, human development has really strained the ability of the Earth to continue to provide for humanity in the ways to which we have become accustomed. Now that we’re at the tipping point of some of Earth’s planetary boundaries, we need to find a way to take ourselves back into the safe zone—or we will significantly undermine the prospect of future generations to continue to prosper.

So I think we are now at a very critical state of human development, and the challenge is how quickly we can create that kind of platform and unite all citizens of the Earth to recognize the mission—to change the way we produce, consume and live. The challenge we are facing now, we were not facing quite so urgently 25 years ago.

CR You probably travel for your job as much as I do. What is the best part of getting out into the field and seeing projects the GEF has financed?

NI Meeting the great people we are fortunate enough to be working with around the world. I always come home inspired—and reminded of how much more there is to do. I saw this when I visited our joint work in Sumatra and saw emerging leaders challenging the way their communities manage the land, and instead advising a better way. When you’ve harvested rice or caught fish the same way for centuries, it takes tremendous courage to imagine there could be another, more sustainable, way.