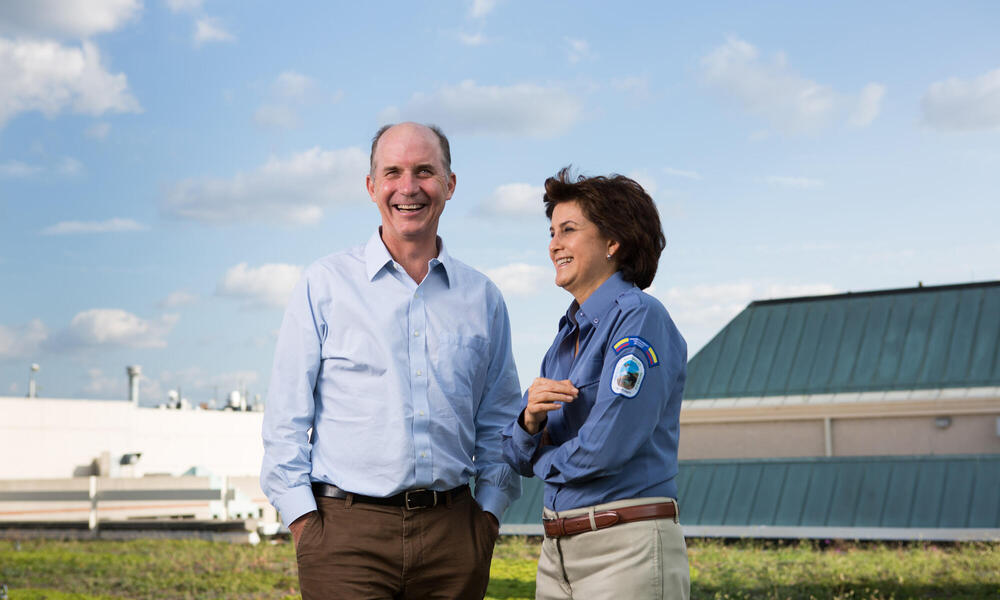 WWF president and CEO Carter Roberts sat down with Dr. Julia Miranda Londoño, director of Parques Nacionales Naturales de Colombia (the Colombian National Park System), to learn more about the intersection of law and conservation, Colombia’s protected areas, and turning guerrillas into stewards of the land.

CARTER ROBERTS: Julia, welcome. It’s so great to see you again. When was the last time we were together?

JULIA MIRANDA: Hi, Carter. It must have been last year, when the WWF Board was in Cartagena. You were very kind and invited me to dinner and to spend some time with you all.

CR: Well, we figured you knew all the best places to go birding! [laughs]

JM: Yes, I can always help you with that. You know Colombia is home to more bird species than any country in the world.

CR: I think I’d heard that somewhere! So tell me—you’ve been director of Colombia’s national park system since 2004. What stands out as your biggest accomplishment during that time?

JM: I feel like that should be an easy question to answer, but it’s not—it’s like picking a favorite child. But I guess I would say I’m most proud of the protected areas that have been created on my watch. [Miranda also oversees the Sistema Nacional de Áreas Protegidas (SINAP), Colombia’s National System of Protected Areas.] Colombia has 320 distinct ecosystems, and I believe each should be protected representationally. The trick, of course, comes in maintaining these areas once they’ve been set aside. As you know, that takes money and strong commitment from all levels of government. So, it’s an ongoing process, but we’ve done a good job so far and it will continue to be a priority.

JM: Yes. We hit 13.31% [total marine coastal territory under protection] just recently, with the expansion of the Malpelo Fauna and Flora Sanctuary. Out of this expansion came the creation of the Yuruparí-Malpelo National Integrated Management District as a strategic area for sustainable fishing and resource management. It’s huge—over 10,400 square miles.

“For 50 years so much land was under guerrilla control. No one had an accurate, holistic picture of the condition the land was in. And in many instances, it was worse than imagined—the impact of the war on Colombia’s biodiversity was enormous. There was deforestation, illegal mining, illegal activities in protected areas such as raising cattle and planting coca, all kinds of assaults on the land. But now we must look ahead and work together.”

CR: So you’ve blown right past Aichi target 11 [the Convention on Biological Diversity goal stating that 10% of marine coastal areas should be protected globally].

CR: After more than 50 years of civil war, the Colombian government and the FARC [Revolutionary Armed Forces of Colombia] rebels signed a peace agreement at the end of 2016. Talk about the role conservation played in reaching this milestone.

JM: I’m not sure anyone anticipated this, but it ended up being quite significant. If you take a step back and think about it, though, it makes perfect sense. For 50 years so much land was under guerrilla control. No one had an accurate, holistic picture of the condition the land was in. And in many instances, it was worse than imagined—the impact of the war on Colombia’s biodiversity was enormous. There was deforestation, illegal mining, illegal activities in protected areas such as raising cattle and planting coca—all kinds of assaults on the land. But now we must look ahead and work together.

CR: Is the plan that FARC members will be hired to actually protect some of the land in parks and other protected areas they once occupied?

JM: Yes. Exactly. We want to turn the families who have been occupying these lands into stewards. They are connected to these places; they know them better than anyone. The idea is to help them make that transition. We do that by recovering degraded parcels of land and training them to carry out permitted activities within the park, such as ecotourism. The most important thing is there must be a legal way for them to make a living. That’s why the protected areas system is incorporated into the national development strategy, as part of implementing the peace agreements. Of course, the trick is to pick the right people to work with. You have to make sure you hire people who will respect nature and are committed to this new way of life.

CR: This sounds a lot like some of the community-based natural resource management we do in Namibia and Nepal and other places.

JM: Well, we aspire to the levels of community success you have reached there. But yes—without the support of those who live closest to the land, long-term conservation simply isn’t possible. It just so happens that in this case, the people who are closest to the land are those who were until recently armed against the government. I think it is not uncommon that war often takes an enormous toll on a country’s natural resources. And when conflicts end, restoring those natural resources is really important but often gets overlooked..

CR: Right. Many national conflicts are caused by contention over access to natural resources. And the longer they persist the more damage is done. Did you visit any of the rebel-held areas during the course of the peace talks?

CR: Were you scared?

JM: Not really. Maybe I should’ve been? But my uniform protected me—the guerrillas see it and respect it. So I was not too concerned.

CR: Before you came to lead the park system in Colombia, you practiced law. In fact, you were among the first to complete a specialization in environmental law at Externado University of Colombia.

JM: Yes, that’s right. When I got my law degree and began practicing civil law, administrative law—it wasn’t all that thrilling to me. It didn’t give me any happiness. I had an idea for how law could help protect nature, but the field of environmental law didn’t exist in Colombia yet. I guess someone had to be first!

CR: The first three presidents of WWF were lawyers. Why do you think law is important to preserve nature?

JM: Because boundaries are important. I like to be optimistic and think, if people know what the right thing is to do, then they will do it. But people can get very prickly when they feel like someone else is telling them what to do with resources—like land or water—that they have always had and always done with as they liked. So it can be complicated sometimes. But law and conservation are also very similar, because they are alive—constantly changing to meet the times.

CR: Last question. When were you happiest in nature?

JM: Wow, what a great question. I guess it was when I was young, riding horses with my brothers, through fields outside Bogotá. It was such a feeling of freedom. As a child, there’s nothing better.

CR: Agreed. What a lovely memory. Thank you, Julia.

JM: It has been my pleasure.