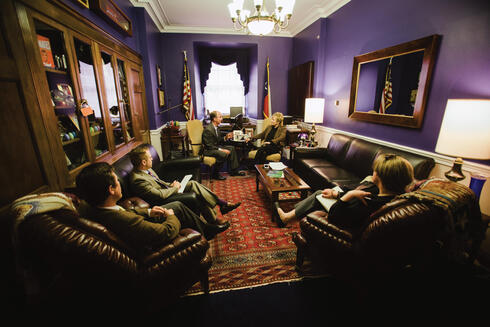 On March 11, 2014, WWF President and CEO Carter Roberts went to Capitol Hill to talk with Rep. Granger  (R-TX) about the connection between rhinos, elephants and national security; why wildlife crime is everyone’s business; and the importance of being where the action is.

CARTER ROBERTS Congresswoman Granger—thank you for doing this. You have this enormously important role as chair of the House Appropriations Subcommittee on State and Foreign Operations. You get to direct resources to US priorities around the world, many of which are related to national security. So as it becomes increasingly accepted that conservation is important not just because of charismatic animals but because of national security, how did you come to see our work through that lens? And what have you done in your current role to advance international conservation, particularly the cause of combatting illegal wildlife trade?

REP. KAY GRANGER I’ll admit I didn’t make that connection at first; I thought of animals, too. I’d spent my congressional career on either national security or homeland security—areas that have been kind of my expertise. And it wasn’t until I came to the subcommittee that I saw the connection—first of all, when I saw the enormous amounts of money involved in wildlife crime.

And I think the truth is, a lot of us didn’t understand the economics of the criminal wildlife trade at first because it was moving so fast. But when you get your head around it, you realize this really is a national security issue. And it tied so closely into my personal experience. The community I come from in Texas, Fort Worth, has an internationally renowned zoo.

CR I’ve been there—it’s fantastic. One of our Board members, Ed Bass, helped secure a Nepalese one-horned rhino for the zoo, and I’ve been to Fort Worth to see it.

KG That zoo has been involved in protecting endangered species for decades. I was so proud of that when I became mayor of Fort Worth. But the realization that in my grandchildren’s lifetime—I have five grandchildren—we could lose rhinos and elephants from the wild forever instantly connected me to the issue personally. It becomes very emotional—in addition to being the source of an enormous amount of money, and a threat to our national security.

And when you see those animals in the wild—I’ve been to Africa several times—when you see a herd of elephants and think, “My goodness, we could lose that,” it becomes very tangible.

CR Tell me about that moment you remember in the wild when you were seeing the elephants for the first time—what you saw and heard and just what you felt at that moment.

KG Well, you know, you’ve seen them in the movies and in photos. But when you see them in the wild, it’s almost spiritual. You think, “God made these magnificent animals and we’re not protecting them as we should.”

And then when you understand more fully that these animals are just being mowed down—even baby elephants, where the tusk means almost nothing in terms of the ivory value—you just don’t forget that. It makes you mad.

“You’ve seen [elephants] in the movies and in photos. But when you see them in the wild, it’s almost spiritual. You think, 'God made these magnificent animals and we’re not protecting them as we should.'”

CR I do think we’re at a tipping point in terms of the world’s awareness of wildlife crime. More and more governments are paying attention and pledging to do the right thing.

KG Which is great. I think the summit on illegal wildlife trade in London that Prince Charles and Prince William led in February is a great indicator of the global importance of the issues. Forty-six countries attended, so we’re not the only ones that have asked, “What’s happening?” But everyone needs to be on board. It’s the responsibility of the United States and other committed countries to make sure the message of how it affects us all is delivered loud and clear.

CR We all own a piece of it. I love when heads of state get together and make commitments on this. The Chinese, Vietnamese and Thai governments all own the issue of managing demand. The African governments own the enforcement issue. And the rest of us own the issue of the trade, because it’s moving through our countries.

When President Obama signed the executive order directing that a whole-of-government approach be applied to wildlife trafficking, it sent a powerful message. The beauty of that approach is that it’s not just the State Department or the Interior Department doing the work—the Justice Department, the intelligence agencies, the entire federal government will make it a priority.

KG It’s really staggering how quickly the trade has progressed. The illegal ivory trade is worth more than $300 million annually.

CR Right, it’s just huge. And then, of course, it’s all bound up with trading arms, where groups like al-Shabaab are selling ivory for guns. And we know that people who are trafficking in ivory are also trafficking in other illegal commodities—human slaves, drugs.

KG I don’t know when those connected—when human trafficking and poaching and terrorism all started moving together, but it hasn’t always been the case.

CR The trade has definitely changed. It used to be dominated by the small mom-and-pop operations, and they were peddling ivory and rhino horn mainly for traditional medicine and other practices. Now it’s driven by new wealth, primarily in Asia, where horns and tiger bones and ivory are signs of prestige. So it’s bigger money and the criminal syndicates are more sophisticated because it’s become such a big business.

Your leadership on illegal wildlife trade has been so important, but you’re only chairing this extraordinarily influential subcommittee through the end of the year. If you could give your successor advice on how best to manage this issue, what would it be?

KG Well, I try to avoid handing out advice unless someone asks for it! But since you asked: they need to realize it’s about more than just numbers. They need to talk to people on the ground—the park rangers, the local communities—in order to truly understand the effect it’s having. And they need to immerse themselves in the science: what happens to the ecosystems when these animals start disappearing. It’s devastating. You know, we put $45 million into the 2014 [Appropriations] bill to address the illegal wildlife trade. That’s unprecedented. But it was absolutely necessary.

CR Right, there’s nothing that beats getting out on the ground. Whatever your business is, you’ve got to get out where the action is. If you’re in the business of health, you’ve got to meet the patients. You’ve got to understand the reality of their situation. And the same is true with elephants and tigers and rhinos and what they face.

You mentioned at the beginning that your grandchildren helped spur you to get more involved with this issue. What type of natural world do you hope they will inherit?

KG We always want more for the next generation, right? I hope the world they grow up in will place a greater value on the wholeness of nature. Because once these animals are gone, they’re gone forever.

CR Thanks again for your leadership and all you have done for our cause.

KG It has been my pleasure.