A Salmon Scientist on Protecting Streams 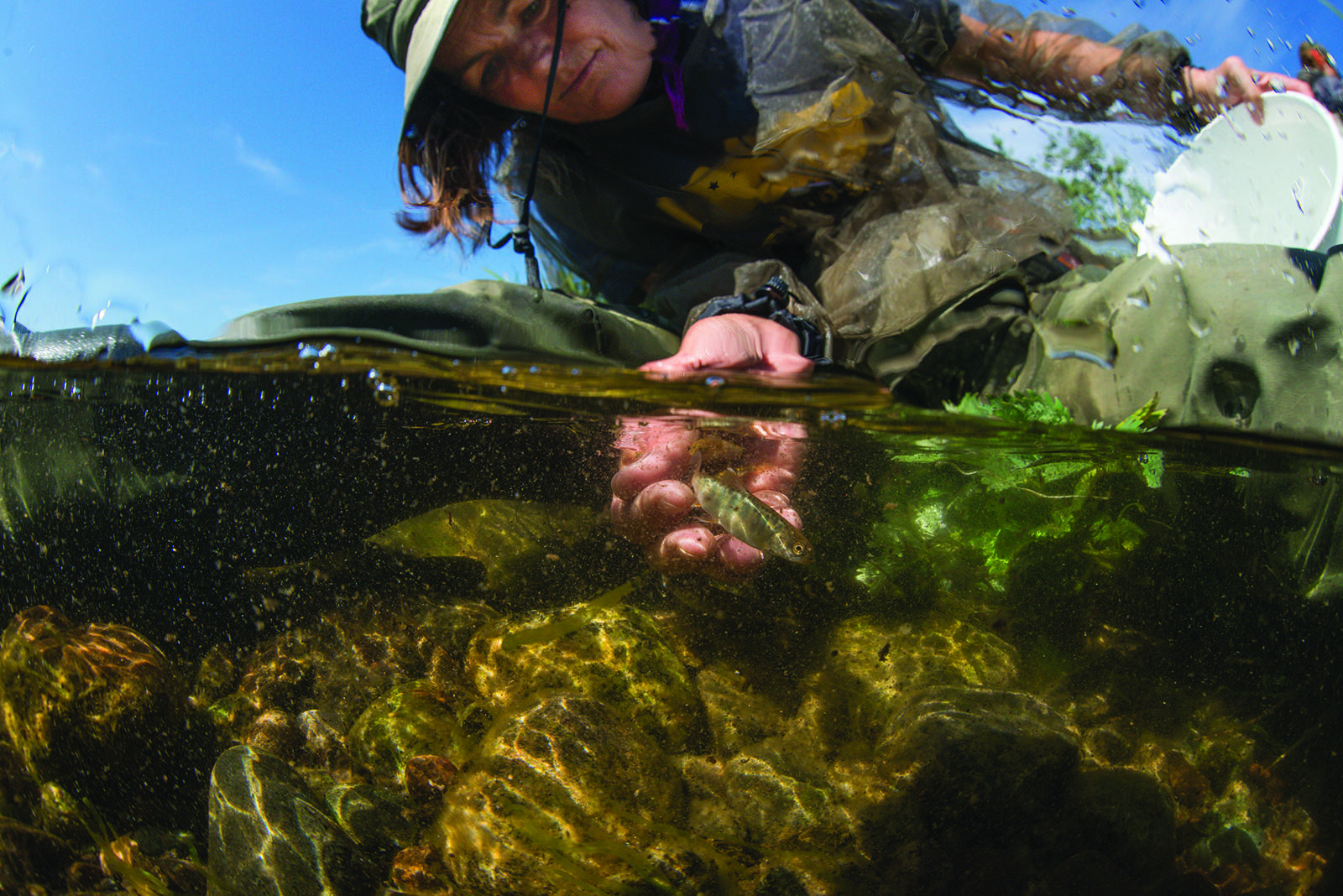 Above: Dr. Carol Ann Woody releases a tiny salmon fry as part of a comprehensive study of Alaska’s fish species.

On the rocky banks of a nameless Koktuli River tributary, just four miles southwest of where the Pebble Limited Partnership intends to dig the largest open-pit mine in North America, Dr. Carol Ann Woody slips a pinkie-sized baby salmon onto a measuring board. Fresh grizzly tracks wander across a nearby sandbar. “Coho,” Woody pronounces, examining the fish’s ruddy fins and elliptical black markings. “These guys go the highest and the furthest upstream.”

Though this clear mountain stream lies 50 miles from the ocean, it is nonetheless a vital cog in the Bristol Bay ecosystem. Here, and in creeks, lakes, and wetlands throughout this sprawling watershed, juvenile salmon spend their early lives devouring insects and smaller fish, growing strong for their eventual journey to the sea. It’s these salmon factories that will suffer most if Pebble Mine gets developed. “This stream wouldn’t be here anymore,” says Woody, an aquatic ecologist at the Center for Science in Public Participation, as she jots down the tiny coho’s weight and length. “There are entire valleys that would be filled in with tailings,” the mine’s acidic waste.

But Woody won’t let streams like this one vanish without a fight. Since 2006, she and her team have been sloshing through Bristol Bay’s remote headwaters to flesh out Alaska Fish and Game’s Catalog of Waters Important for the Spawning, Rearing or Migration of Anadromous Fishes, the state’s list of streams and lakes that support salmon and other fish that ascend rivers from the sea to breed. Woody’s surveys have added more than 150 stream miles to the catalog, conferring an extra layer of protection against destructive development.

While salmon earn the headlines, they’re only one member of Bristol Bay’s close-knit aquatic community. On this sweltering June day, each scientist in Woody’s team is busy scrutinizing a different puzzle piece—flipping over rocks to collect caddis flies, placing frog-faced fish called sculpin into plastic bags, and scrubbing algae off rocks with an electric toothbrush. According to Dan Bogan, an aquatic ecologist studying the region’s phytoplankton, the data will provide an invaluable baseline for looking at changes to these communities over time. “The value of what we’re doing is mostly for future generations,” Bogan says.

Future generations may also look back gratefully at Woody’s research, which fills in many of the conspicuous knowledge gaps left by the Pebble Limited Partnership’s consultants. “We know that Pebble’s science has been lacking,” says Dave Aplin, director of community outreach for WWF’s Arctic program, which has supported Woody’s work since 2014. “Carol Ann’s research sets a standard for the whole state about how to make sure we truly understand what we’re putting at risk.”

Unlike many scientists, Woody isn’t shy about engaging in what she calls “combat biology.” Two decades ago, she angered her supervisors at the US Forest Service by setting wide logging buffers around salmon streams in Alaska’s Tongass National Forest. Today, she sports a t-shirt bearing the slogan “I Vote Wild Salmon” beneath her waders. “I’m one of those people who cares too much—about the people of Bristol Bay, about the fish, about clean water,” Woody says. “What we have here is one of the best salmon-producing systems on the planet. There’s nothing else like this left on Earth.”

Explore more of this issue's coverage of Bristol Bay: