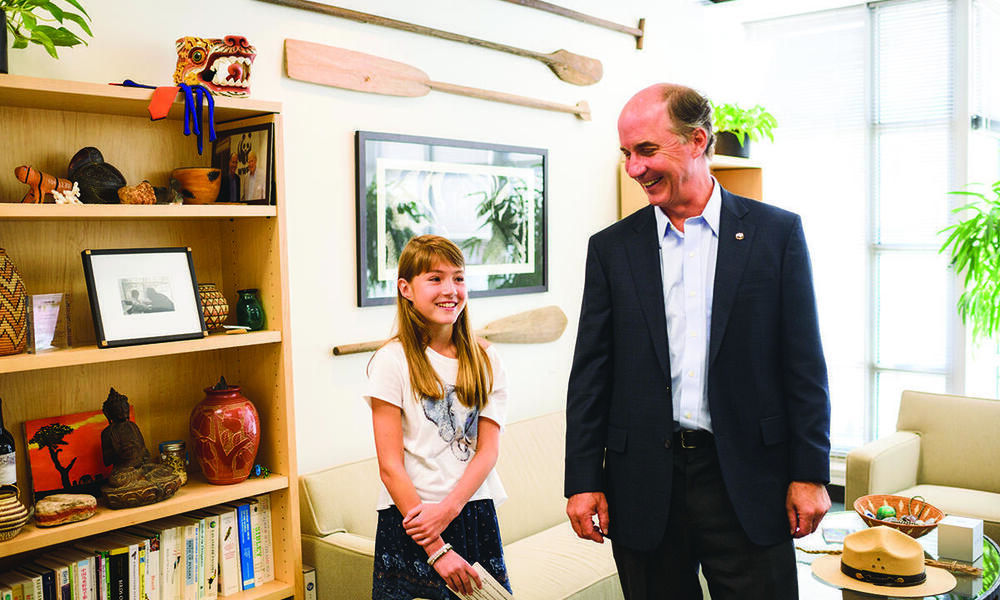 On August 24, 2015, WWF president and CEO Carter Roberts sat down in his office with Charlotte Mayer to learn more about her passion for endangered species conservation. This time, though, we turned the tables and Charlotte asked Carter most of the questions. They talked about why pandas are Charlotte’s favorite animal, the importance of questioning the status quo, and how believing in yourself is the best way to get things done.

CHARLOTTE MAYER OK, so my first question is: Why did you want to want to work for World Wildlife Fund?

CARTER ROBERTS Well, my mother loved animals and believed I could do anything. And I grew up obsessed with nature—salamanders under logs, bird songs, climbing mountains, it didn’t matter—I just couldn’t get enough. And my father was a doctor who treated really sick children and devoted his life to training other doctors around the world to do the same. Watching my dad made me think, “I would love to do something for the planet, but I want to do it in a way that’s sophisticated and global and can really make a difference.”

And when I was 30 years old, I made a list of things I wanted to accomplish in my life. I wanted to get married, have kids, see the Himalayas and the Arctic. But I also wrote down that I wanted to lead a group of people saving the most important places on Earth. And that’s what WWF does. So, I got lucky. That’s it. OK, your turn. What was the first moment that you realized you loved nature?

CM Taking a hike with my family, where we saw trees, squirrels, deer, all sorts of nature.

CR And do your mom and dad love nature as much as you do?

CM They do. We spend a lot of time outside. My mom says nature is very soothing.

CR  Tell me Charlotte about some of the cool things you’ve done for the planet.

CM Well, I’ve given speeches at my school about endangered species. And I’ve also started a company with a friend of mine and we make environmentally friendly bath products.

CM Thanks, it’s a lot of fun! So, what is a typical day like for you?

CR There is no typical day! Last week I was in Poland, prowling through the oldest forest in Europe, where we’re restoring European bison. The week before that I was in Palo Alto, meeting with Apple and Google on using technology to help us do what we do. So there’s no typical day, and I learn a ton every single day, and that’s what I love about this job.

CM What is the biggest success you have had since you’ve been at World Wildlife Fund?

CR The first thing I’d say is that any success we’ve had involves the work of many people—there’s not very much that I do alone. But the truth is, the thing that I’m most proud of is that we helped the government of Brazil create a system of parks. It’s huge—one and a half times the size of California. But the problem was there weren’t any rangers or park guards to protect it. So last year I was part of a large group of partners who put together a package to ensure there will always be rangers protecting those parks. We raised $215 million, which was matched by the government, and that was pretty cool.

CM That’s a good one. What do you try to teach your children about conservation? Are they as interested as you are?

CR All of my kids loved animals from the day they were born. My son Christian loves lions; my son Street loves elephants; and my daughter Liza loves giraffes. I’ve been lucky enough to show the kids some of the most beautiful places on Earth, like Namibia and Nepal. And mostly what I try to teach them is that they are all part of this amazing, extraordinary planet and every action they take either helps diminish it or keep it intact.

CM What is your favorite animal and why?

CR Well, I love birds. I grew up singing and I love any animal that sings. But my favorite is the resplendent quetzal. It lives in the cloud forests of Guatemala, in oak trees covered in orchids, and eats avocados. It’s bound up with Mayan legends, and the Guatemalan currency is called the quetzal. But it’s a very difficult bird to spot.

CM Have you ever seen one before?

“All of my kids loved animals from the day they were born...what I try to teach [my children about conservation] is that they are all part of this amazing, extraordinary planet and every action they take either helps destroy it or save it.”

CR I’ve climbed to the top of ancient volcanos covered by mysterious cloud forests to look for them and been lucky enough to see several. They’re amazing. In direct sunlight they actually shimmer, and when they turn their heads their feathers can shift from green to blue to gold. Plus, what’s not to like about a bird that eats avocados? What’s your favorite animal?

CR Pandas? Well you came to the right place. Did you know our panda logo is one of the most recognized in the world? And we just got a new baby panda [at the National Zoo]? Why do you like pandas so much?

CM Well, because they’re cute. And because they are an iconic symbol for the environment. Actually, I don’t know the exact reason why I love them so much—I just do.

I have another question: How do people impact the environment without knowing it?

CR The biggest way people have an impact on the environment, perhaps without realizing it, is through the food they buy. Because when you go to the Amazon or Borneo and you ask people, “What is the biggest thing that’s destroying this forest?” the answer is going to be unsustainable forms of food production.

CM How can everyday people help the planet?

CR Ask where everything comes from, and how it’s made. Ask that question about your energy sources, your food, the things in your home. Because the more people ask that question, the more it will lead to things being produced in a way that keeps the planet intact. And I also think it’s important that everybody gets out into nature. For your mom it’s soothing, and for me it restores my soul. But mostly it’s a reminder of how much we depend on nature for our water, our food, our climate—basically everything.

CM So what’s the coolest part of your job?

CR That’s an easy one: the people I meet. It’s our staff and partners who are on the front lines of WWF’s work around the world—community members in Africa and in Asia, heads of state, kings, queens, our Board members (including Leonardo DiCaprio!), and some of the leading scientists in the world. My dad told me you should always pick careers and jobs based on how much you’ll learn, and I learn something new every day from the people with whom I work.

CM What percentage of the world’s animals do you help?

CR Tough question. Let’s see. I would like to think we help all of the animals of the world. Because when we help solve climate change, stop poachers, keep the Amazon intact, or help people and companies make smart choices, it has an effect just about everywhere. So, I would say we help all of the animals—including us, because if we don’t take care of the planet, it’s not very good for us, either.

CM This is my last question. Is there anything else you want to tell animal lovers like me?

CR Keep the faith. You should never underestimate the ability of one person to accomplish extraordinary things—ever. But you’ll never accomplish anything if you don’t stand up for what you believe in and find ways to make things work.