Captive Tigers in the US

From American Suburbs to Asia’s “Tiger Farms,” the Case Against Keeping Tigers Locked Up

A few hours before sundown on October 18, 2011, law enforcement officials in Zanesville, Ohio, received a strange 911 call: The neighbor of a man named Terry Thompson had spotted a black bear running loose on Thompson’s property—then a large male lion. As police officials drove toward the scene, they began spotting other large carnivores. The area was residential, and there was a school soccer game happening nearby, so the officers were ordered to shoot the animals. By the following morning, they had killed six bears, 17 lions, and a slew of other wild creatures—including 18 tigers. Thompson had released all of them from the enclosures in his yard before committing suicide.

The Zanesville incident was so bizarre and horrific that it made international headlines. But it was also a rude awakening to the fact that many people in the US own exotic animals, including Panthera tigris. There are thousands of captive tigers throughout the country. You can find them in backyard enclosures, petting zoos, and even truck stops. They outnumber the tigers believed to remain in the wild today. And beyond the problems their captivity poses in the US, it’s putting their wild counterparts at risk.

Estimated number of captive tigers in the US

Leigh Henry, WWF’s senior policy advisor for wildlife conservation, says she first became aware of the issue around 2006. “I was working on WWF’s TRAFFIC team at the time,” Henry says. “An organization called Save the Tiger Fund approached us and said, ‘We’re concerned about captive tigers in the US. Nobody knows much about them. If we get you some funding, could you do a study?’”

With the help of a consultant, Henry put together the first comprehensive report on tiger ownership in the US. The results of their research were jarring. Not only did there appear to be roughly 5,000 captive tigers across the country, but the vast majority of those cats—about 95%—were, like Thompson’s tigers, privately owned. That total is just an estimate, Henry adds. “No one can say for certain, because the US actually has no comprehensive system for monitoring captive tigers.”

Instead, Henry found regulations that were patchy and riddled with loopholes. The US Fish and Wildlife Service (FWS), for example, required permits for certain activities that would normally be prohibited under the Endangered Species Act (such as breeding tigers or transporting them across state lines). But at the time, the FWS exempted generic tigers—tigers with genes from multiple subspecies—from those rules. “Generic tigers are basically mutts, for lack of a better word,” Henry says. “Since they aren’t genetically pure, they don’t have conservation value to the FWS. But most of the tigers in the US are generic.” So the FWS wasn’t monitoring them.

The USDA, meanwhile, required exhibitor licenses for tigers that were being shown to the public—whether for free or for profit—but not for tigers that people simply wanted to keep privately as pets. Many states banned private possession of the cats, but still exempted anyone with a USDA license. A handful of others allowed possession with a state-issued permit, and several had no barriers whatsoever. 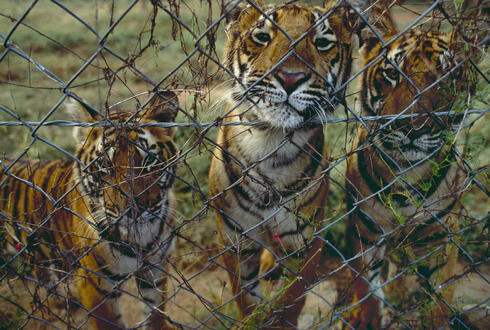 “Those laws have enormous loopholes. USDA licenses are easy to get, and many people who apply for them are just pet owners trying to evade the state bans,” says Howard Baskin. Baskin and his wife Carole run Big Cat Rescue, a 67-acre large cat sanctuary in Tampa, Florida, that’s been operating since 1992. They currently shelter about 70 cats—including 12 tigers. Some came to the sanctuary from people who tried their best to care for the animals but didn’t have the knowledge or resources to meet their needs.

“But then there are owners like Terry Thompson, or the woman in Ohio who had four tigers and two lions, and declawed and defanged many of them,” Baskin says. “She would chain them down and charge people thousands of dollars to receive big cat ‘training’ experience. People kept getting hurt so she lost her USDA license, but she kept doing it anyway. It was a horrible situation. We took in four of these cats at the request of the state after she abandoned them.”

Besides putting both cats and people in danger in the US, the regulations allowing such behavior also pose big problems internationally. “A huge issue here is cub petting operations— people who breed tiger cubs so they can charge customers to pet them and take pictures with them,” Baskin says. “They can only use the cubs for a few months before they grow too big to be safe, and lose their commercial value.” Once that happens, there’s no way to track where the cubs end up—and thus no way to make sure they aren’t being sold illegally.

“Our concern is that you have all of these adult tigers in the US that are unwanted,” says Henry. And not just because they’re dangerous: They’re also incredibly expensive pets. The TRAFFIC report estimated that it costs $5,000-$6,000 a year to feed a grown tiger. And while there are some good sanctuaries like Big Cat Rescue in operation, “most of them are full to overflowing owing,” Henry says.

On the other hand, the value of a tiger carcass in Asian black markets can climb as high as $60,000. For someone trying to get rid of a large tiger, Henry says, selling its parts on the black market could prove too tempting to resist. And the availability of those parts fuels demand for even more—which in turn drives continued poaching of the cats in the wild.

What’s more, America’s captive tigers have become a diplomatic stumbling block in efforts to end tiger farming in China and Southeast Asia. When the tiger farm issue is brought up in international meetings, fingers tend to get pointed at China—but China has repeatedly questioned why the US isn’t doing something about its own tiger problem. “We need to figure out a better way to regulate the tigers in our own backyard so that the US can continue to be a global leader in combatting wildlife crime, and help influence China, Vietnam, Thailand, and Laos to shut their tiger farms down,” Henry says.

Both WWF and Big Cat Rescue have been advocating for tighter laws that can better regulate captive tigers and halt the breeding of cubs for profit. In 2016, they saw two major victories. The first was an April decision by the FWS to scratch the generic tiger exemption from its laws—a change that more than 450,000 WWF supporters had called for. Around the same time, the USDA enacted a ban on public contact with tigers under four weeks old, in response to a petition from WWF, Big Cat Rescue, and a coalition of other animal rights organizations.

“That was a step in the right direction, but we asked for a ban on all public contact,” Henry says. However, the USDA is still considering further action in response to the petition. She’s hopeful about the outcome—and about the pressure these new policies could put on other countries with tiger issues. And Baskin says Big Cat Rescue is advocating for a bill completely banning private ownership and breeding of big cats; so far, it’s gained 82 cosponsors in the House of Representatives, and Baskin expects the number to keep growing.

“Unfortunately, it may take more tragedies like Zanesville to really change these laws,” Baskin says. “I’m hoping it doesn’t. There’s no reason for people to keep tigers and other dangerous carnivores in their backyards.”

Get the latest on tigers.