What is the environmental impact of sushi?

Sushi originated in Japan thousands of years ago, presumably as a way to preserve fish in fermented rice. Now it’s a global gastronomic mainstay. But our appetite for these seaweed-wrapped morsels isn’t without environmental costs. So before you grab the wasabi, get the raw facts. 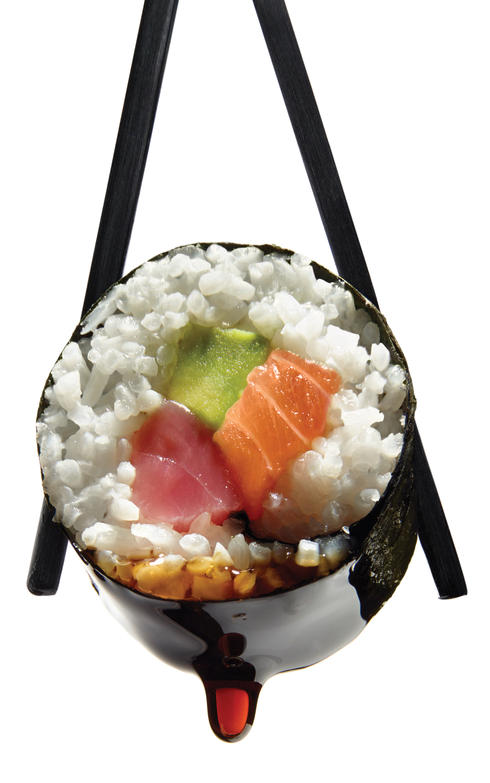 SPILL THE BEANS
Around 75% of the world’s soy is used for livestock feed (including for farmed fish); because of growing demand for meat, soy production has grown tenfold in the past 50 years. It is now the second-largest agricultural driver of deforestation. As a participant in the global Roundtable on Responsible Soy and the US-based Field to Market Alliance for Sustainable Agriculture, WWF is working with the soy industry to adopt more sustainable practices.

In 2014, sales of Hass avocados, representing more than 95% of American avocado consumption, skyrocketed to a record 4.25 billion fruits. That’s nearly four times as many as were sold in 2000. But growing sales have a high cost for freshwater: It takes about 90 gallons of water to produce just a single California-grown avocado.

Half the world’s population depends on rice for food and/or income. But while rice paddies often provide good habitat for birds, they can take a heavy toll on freshwater resources. In India, Laos, and other countries, WWF supports an eco-friendly rice farming technique called the System of Rice Intensification, or SRI, that reduces water use by about 30% while increasing crop yields and farm incomes.

The average Pacific bluefin tuna can grow to more than 1,500 pounds and yield 10,000 pieces of sushi or sashimi. But decades of overfishing and rising demand—driven especially by sushi lovers in Japan—have pushed the Pacific bluefin to the brink. Scientists estimate its current population at just 2.6% of its historic size, with fishing levels three times higher than what is sustainable.

OCEAN’S BOUNTY
Abundant in antioxidants and vitamins, seaweed is something of a superfood. But today, warming ocean waters are threatening seaweed and seaweed farmers’ livelihoods. Oceans X Labs, an initiative of WWF and Conservation X Labs, is supporting exciting innovations for sustainable seaweed farming, including pumps that push cool, nutrient-rich water toward the sea surface to promote seaweed growth.

SWIMMING UPSTREAM
Ninety percent of wild-caught salmon in North America is produced by sustainable Alaska  fisheries. Unfortunately, wild Pacific salmon face increasing threats from habitat destruction, overharvesting, and mining activities. In Bristol Bay, WWF is working with local communities to prevent the construction of Pebble Mine, which could have devastating commercial and environmental impacts. When shopping, always look for seafood certified by the Marine Stewardship Council.