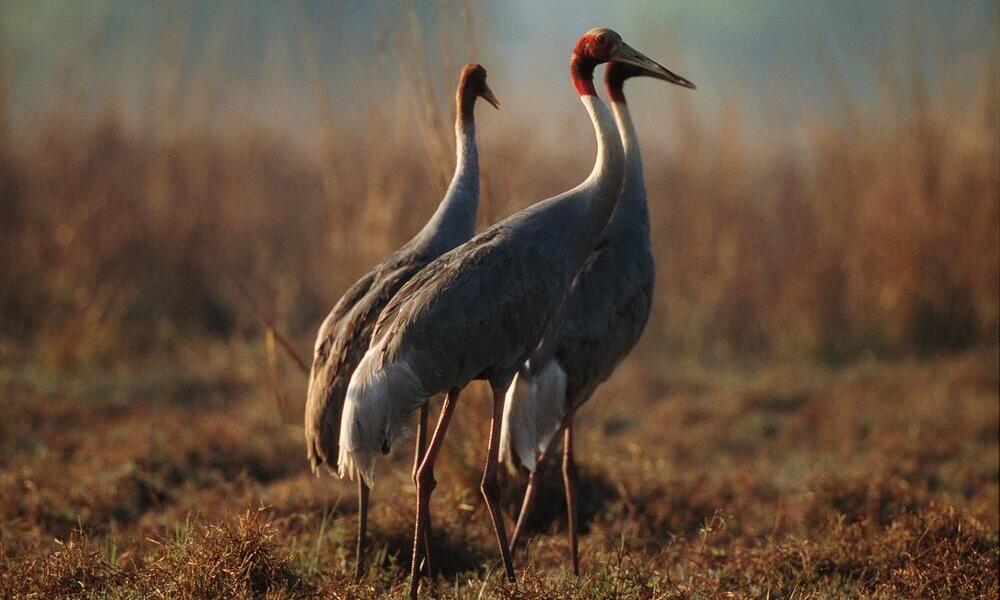 Standing over five feet tall with a wingspan of around eight feet, the sarus crane is the world’s tallest flying bird and is listed as “vulnerable” on IUCN’s Red List. This non-migratory bird is native to parts of South Asia, where it faces numerous threats including habitat loss and climate change. Nepal’s second-largest population of sarus crane is found in the Lumbini World Heritage site, an important pilgrimage destination owing to its history as the birthplace of the Buddha. Though the site’s crane sanctuary offers some protection, the area has, in recent years, experienced prolonged dry spells which have caused wetlands and water sources to shrink.

Experts anticipate these changes in rainfall patterns in lowland Nepal to cause significant fluctuations in the breeding success of sarus cranes—particularly if the frequency and intensity of dry seasons increase. Moreover, erratic and extreme rainfall events, which are becoming more frequent with climate change, destroy the breeding grounds and nests of the sarus crane.

In an effort to reduce the impact of such hazards on sarus cranes, WWF worked with the Lumbini Development Trust (LDT) to restore and create new wetlands that can better store water during dry spells, established raised nesting grounds made of excavated soil and grass to minimize impacts of flooding during heavy rainfall events, created dikes and embankments to reduce sedimentation, and planted native varieties of rice which provide a food source for cranes. The restored wetlands have also attracted other species, including blue bull, wild boar, and many species of birds, fish, and turtles.