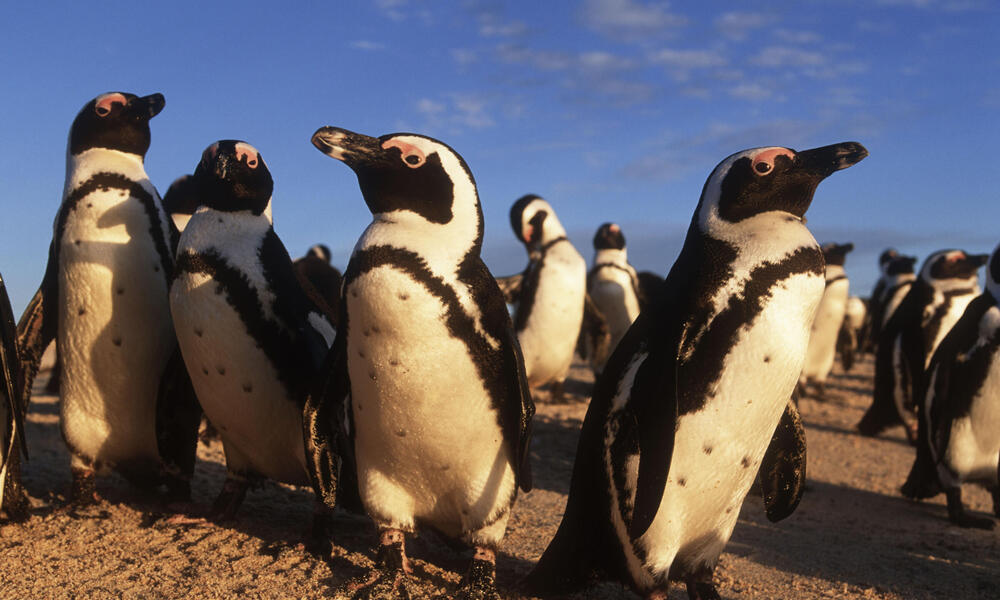 Every year, around a million people flock to Simonstown, South Africa, to catch a glimpse of one of the country’s 28 known breeding colonies of African penguins (Spheniscus demersus). In the past century, however, the total population of African penguins has declined dramatically. Shifts in ocean circulation patterns combined with historic fishing pressure have changed the distribution of small fish, leading to insufficient food for penguin colonies. There has also been an increase in the frequency of extreme weather events. Storm surges and heavy rainfall events have resulted in the destruction of penguin habitat. During heat waves, chick-rearing penguins often abandon their nests to cool themselves in the water, leaving their eggs and chicks exposed and vulnerable to hyperthermia and/or dehydration.

WWF worked in collaboration with the seabird protection non-profit SANCCOB and South African National Parks to reduce the impacts of extreme weather events on penguin nesting sites. Three types of artificial nest boxes (cement, ceramic and fiberglass—new and old designs) were placed in the colony to assist breeding by providing protection to chicks from predation, heat waves, and winter storms. The project monitored breeding success at each nest in conjunction with data from a newly installed weather station and temperature sensors installed within artificial nests and adjacent areas where penguins breed in the open or under bushes. Ceramic nests had the highest usage levels and hatching success. Overall breeding success (chicks fledged as a percentage of eggs laid) however was similar between ceramic and fiberglass nests. Older cement nests were less frequently used and had the lowest breeding success.

The data is now being used to assess the most favorable nest types and placements to improve breeding success. Gaining an understanding of how extreme weather events play out locally and their effects in different parts of the colony will also feed into an early warning system being developed to alert managing authorities to extreme weather events for the coordinated rescue of eggs and chicks in danger. On-the-ground penguin rangers also monitor the breeding of the birds and assist with habitat maintenance and rescue of eggs for hand-rearing, when chicks or eggs are abandoned during extreme weather. Over the course of one breeding season, 60 chicks and 112 eggs were rescued in this way from the colony.