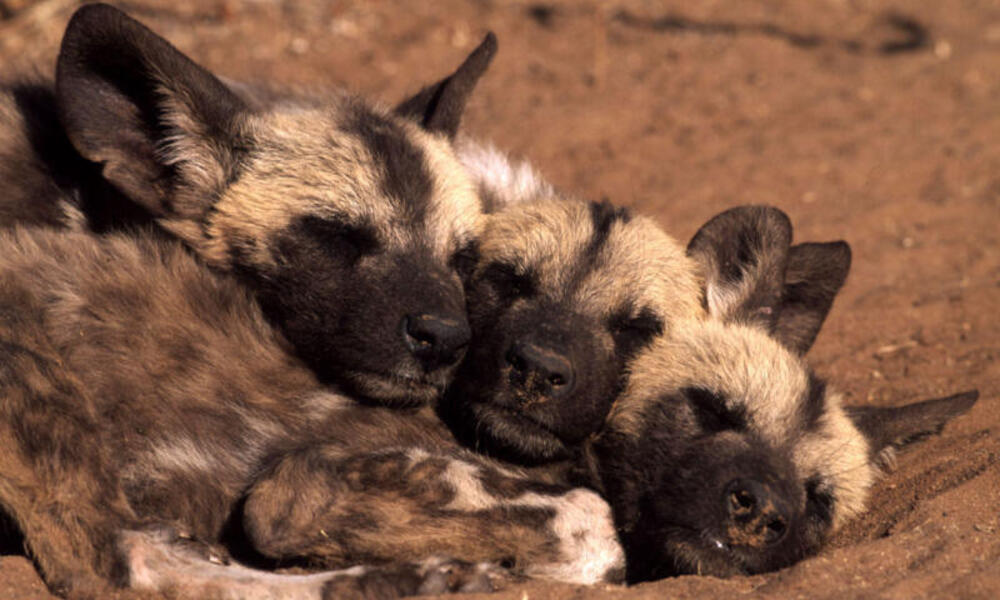 While perhaps not as well-known as other African species, the wild dog is one of the world’s most endangered mammals. Once numbering nearly half a million, today there are as few as 3,000 African wild dogs left. The surviving packs live in savannas and woodlands in eastern and southern Africa, particularly in Tanzania, Mozambique, Botswana and Namibia. Wild dogs are social and gather in packs of around 10 individuals, but some packs number more than 40. They are opportunistic predators that hunt medium-sized ruminants, such as gazelles. In a sprint, African wild dogs can reach speeds of more than 44 miles per hour. Despite their prowess as hunters, their numbers have declined due to major threats including accidental and targeted killings by humans, viral diseases like rabies and distemper, habitat loss, and competition with larger predators like lions. Conflicts occur when wild dogs come in contact with people whose livelihoods rest largely on livestock and agriculture. Problems have also arisen as expanding human activities decrease the habitat available for wild dogs and their prey.

Securing Protected Space for Wild Dogs and Other Wildlife

With the capacity to cover a range of well over 500 square miles, wild dogs need expansive territories to survive. Today, their existence depends on large protected areas. WWF has worked alongside governments in southern and eastern Africa to create and safeguard wildlife reserves and the corridors that connect them for the benefit of the African wild dog and other species.

One of the areas where this is underway is KAZA, the Kavango Zambezi Transfrontier Conservation Area. Formally launched in March 2012, KAZA spans political boundaries—connecting critical wildlife habitat in Namibia, Angola, Botswana, Zambia and Zimbabwe. Some of Africa’s greatest natural treasures—including the Okavango Delta and Victoria Falls—are found here as well as nearly half of Africa’s elephants. KAZA also provides one of the last spaces where wild dogs can live and roam.

WWF is proud to be among the leading partners that helped KAZA come to fruition, and we continue to work with governments and partners in the five participating countries to ensure that it becomes a reality on the ground. This includes developing a strategy for protecting wild dogs in KAZA which suggests that wild dogs become a flagship species for KAZA. The Species Management Plan (SMP) that KAZA has developed for wild dogs is only the first of many SMP’s that KAZA hopes to develop for a wide range of species. 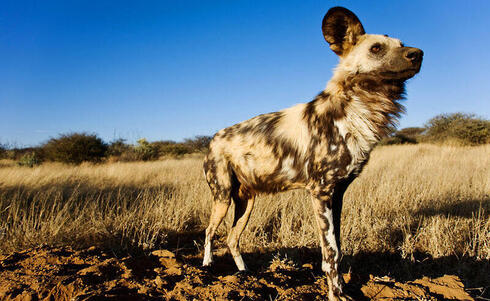 WWF is also monitoring wild dog movements in KAZA. The data provided by such tracking efforts helps WWF and our partners to gage population size and ensure that protection measures are working. To this end, we placed tracking collars on four wild dogs early in 2012. A second attempt to place collars on a pack of wild dogs had to be postponed after the dogs left the area. This is a common challenge given that the packs’ ranges vary widely, and they can travel great distances. WWF will try again to place collars on additional dogs in the near future. Additionally, WWF’s geographic information systems specialist is currently updating maps of wild dog movements and distribution as part of WWF’s wild dog monitoring database.

One of the threats wild dogs face involves encountering violence from humans. WWF is working with communities in Namibia to minimize such conflict. In collaboration with a new private lodge operator, WWF launched a pilot project to create incentives to promote greater community tolerance toward wild dogs (and other predators) in the Wuparo Communal Conservancy, which is adjacent to Mamili National Park. The incentive system rewards conservancy members for wild dog sightings.

WWF organized and led the Wild Dog Symposium in May 2012, which brought together scientists, conservationists and government and partner staff to discuss wild dog conservation. The Symposium Proceedings were published and distributed in time for a November 2013 workshop in Kasane, Botswana, to develop a strategy and action plan for wild dogs.