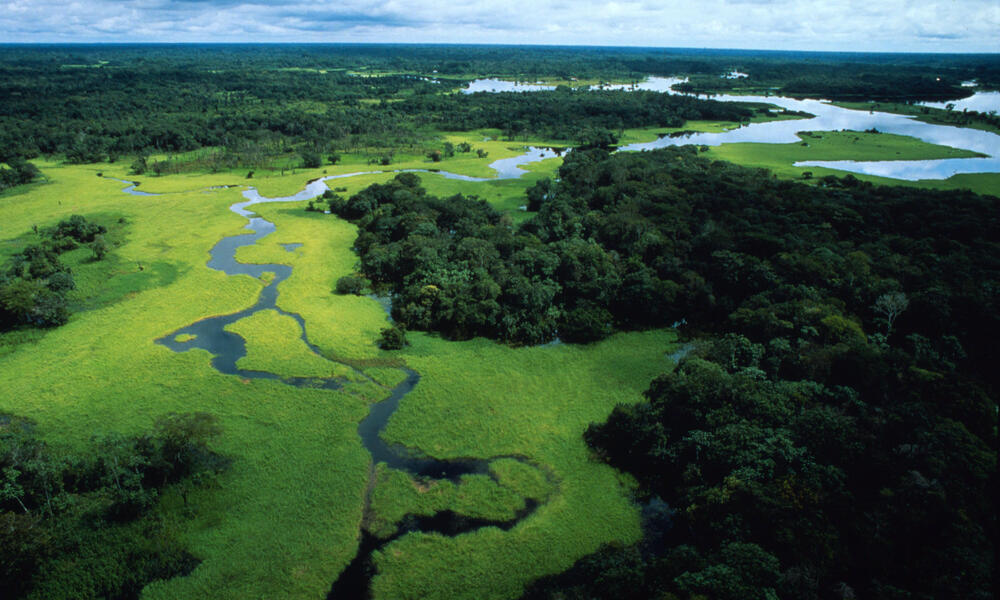 Capital has often been thought of narrowly as physical capital – the machines, tools, and equipment used in the production of other goods, but our wealth and wellbeing also relies on natural capital. If we forget this, we risk degrading the services that natural ecosystems provide, which support our economies and sustain our lives. These services include purifying our water, regulating our climate, reducing flood risk, and pollinating our crops.

Centered at Stanford University, the Natural Capital Project is a partnership among WWF, The Nature Conservancy, Chinese Academy of Sciences, University of Minnesota, and Stockholm Resilience Centre. Through pioneering science, cutting-edge technology, and collaborative partnerships worldwide, the Natural Capital Project works to integrate the value nature provides to people into all major decisions.

An essential element of the Natural Capital Project is developing tools that help decision makers protect biodiversity and ecosystem services.

WWF scientists have helped develop a range of software tools for integrating the value of ecosystem services and biodiversity in different decision contexts.

WWF scientists have also developed complementary policy tools to help people apply InVEST to change real-world decisions, including tools for developing future scenarios. WWF scientists with partners from around the globe have worked to consolidate lessons from the first ten years of the Natural Capital Project. We have learned valuable insights about how knowledge on ecosystem services is used in decisions, and what enables that use.

Impacting Decision Making Across the Globe

Myanmar
Sustainably managing Myanmar’s natural capital – including biodiversity, arable lands, forests, rivers and mineral resources – is fundamentally important for the future of its economy and the wellbeing of its citizens. About 26 percent of the population in Myanmar lives below the poverty line - twice as high in rural areas, where 70 percent of the population lives. Meeting development needs – in particular for security, food, energy and water – depends on sustaining Myanmar’s natural capital to deliver benefits to its people long-term. WWF with partners are currently mapping and assessing natural capital in Myanmar, mainstreaming the outputs of this assessment with Myanmar government and civil society, and building capacity among these stakeholders to conduct such assessments and use them in decision-making. These analyses are being used to support WWF’s work to promote a “green economy” future for Myanmar, in which the sustainable use of natural capital is integrated into the country’s economic development.

Coastal Belize
Belize’s coastal zone includes spectacular atolls, lagoons, mangrove forests, seagrass beds, coral reefs, and more than 1000 cayes. It is home to 35 percent of the population of Belize and endangered species like the West Indian manatee. WWF and The Natural Capital Project, in partnership with the Coastal Zone Management Authority and Institute (CZMAI),helped stakeholders design the government’s national coastal zone management plan. This is the world’s first coastal management plan that establishes a sustainable approach by quantifying and valuing coastal and ocean resources. InVEST was used to identify the impact of alternative zoning schemes on lobster fisheries, tourism and recreation, coastal protection from storms and inundation, and habitat for culturally important species. The plan reduces the area of habitat at high risk by 20%, while also expanding economic opportunities — tripling the area for coastal development and tourism infrastructure, doubling that for marine aquaculture, and holding steady the area for lobster fishing.

Mozambique
WWF worked with the Mozambican government and the Natural Capital Project to assess the risks to habitats and identify options for critical protection to preserve ecosystem services. Together, they identified opportunities to encourage and facilitate sustainable development based on the sustainable exploitation of resources in the Primeiras e Segundas Protected Area. This analysis demonstrated where mining operations and infrastructure are most at risk from coastal hazards and informed strategies for locating infrastructure and operations strategically to both reduce impacts to ecosystem and reduce risk to investments. Next steps are to assess key ecosystem services for communities in Primeiras e Segundas and to support the government’s development of a national blue/green economy plan.

The Amazon
WWF and our partners work with the Brazilian government to determine how valuable the Amazon Region Protected Areas (ARPAs) is to its citizens and the world. Most of the services ARPAs provide – such as sequestering carbon dioxide, cleaning the surface water, electric generation from hydropower, and providing habitat – are difficult to value because they are not traded in markets. In collaboration with Woods Hole Institute and Bowdoin College, WWF uses regional land-use and biophysical maps and economic data to value the goods and services ARPA provides.

Sumatra, Indonesia
In Sumatra, commercial logging and conversion are decimating the forest habitat of tigers, orangutans, rhinos and many other rare and endangered species. With support from the Natural Capital Project, WWF has mapped the distribution and economic value of ecosystem services in priority watersheds under current and proposed land use plans. The results guided regional and local government-led land-use planning efforts.

Eastern Arc Mountains, Tanzania
Agricultural development, logging, and fires have reduced the forests of the Eastern Arc Mountains by 70 percent over the past decades—threatening thousands of rare species, people’s livelihoods, and water and power resources. The Natural Capital Project works with over 40 collaborators in Tanzania, the UK, and South Africa to map and value the mountains’ many ecosystem services. This information was used to identify areas that could be candidates for payment under REDD+ and voluntary carbon projects.

Colombian Amazon
The Amazon Piedmont of Colombia is one of the most biologically outstanding areas of the Northern Andes. It is also a landscape of great cultural significance as the ancestral home to several indigenous groups.

The rain and cloud forests of Colombia’s Upper Putumayo region within the Amazon Piedmont are threatened by advancing agriculture, ranching, and infrastructure development. These activities can have adverse effects on the benefits nature provides, including water supply and quality, soil erosion, carbon capture and sequestration, and biodiversity. The impacts of climate change intensify these effects, which will likely have serious consequences on future development.

To identify areas in the Upper Putumayo that supply multiple ecosystem services and could be at risk from climate change, WWF, with support from the Natural Capital Project, used InVEST to map regionally important services and compare their provision under different climate scenarios. Areas with the largest concentration of ecosystem services and greatest vulnerability to the effects of climate change are now being considered as priority sites for conservation actions, including the establishment of silvopastoral systems, which incorporate strategically located tree cover on ranchlands; and, developing compensation and rewards for ecosystem services (CRES) schemes, which create incentives for better land management.

Heart of Borneo
The Heart of Borneo is an area of mountainous forests with exceptional biological diversity in the center of the world's third largest island, covering areas of Indonesia, Malaysia, and Brunei- Darussalam. More than two decades of unsustainable logging, fires, plantation development, and mining has led to a dramatic decline and degradation of forest and freshwater ecosystems. WWF and its partners carried out a climate, ecosystem and economic assessment using several modeling tools, including InVEST, to highlight how conservation and sustainable land management in the Heart of Borneo can help create a “Green Economy.” The valuation study and overall green economy report contributed to the decision to designate HoB as a Strategic National Area (KSN): the first and only KSN in Indonesia motivated to protect environmental values.

The Greater Virungas Landscape
Encroachment, illegal logging, pollution, and mining threaten biodiversity and livelihoods throughout the region’s rich forest ecosystems. The Albertine Rift Conservation Society (ARCOS) is using InVEST outputs to gain government and stakeholder support for ecosystem service and biodiversity conservation in the Virungas landscape, which covers areas of Uganda, Rwanda and Democratic Republic of Congo. The project has involved quantifying and valuing ecosystem services and examining tradeoffs between a Business as Usual (BAU), Green, and Market-driven scenarios.

WWF mainstreams the value of nature in its work all over the world, with similar projects emerging in the Arctic, China, Bhutan, Nepal and Cambodia.