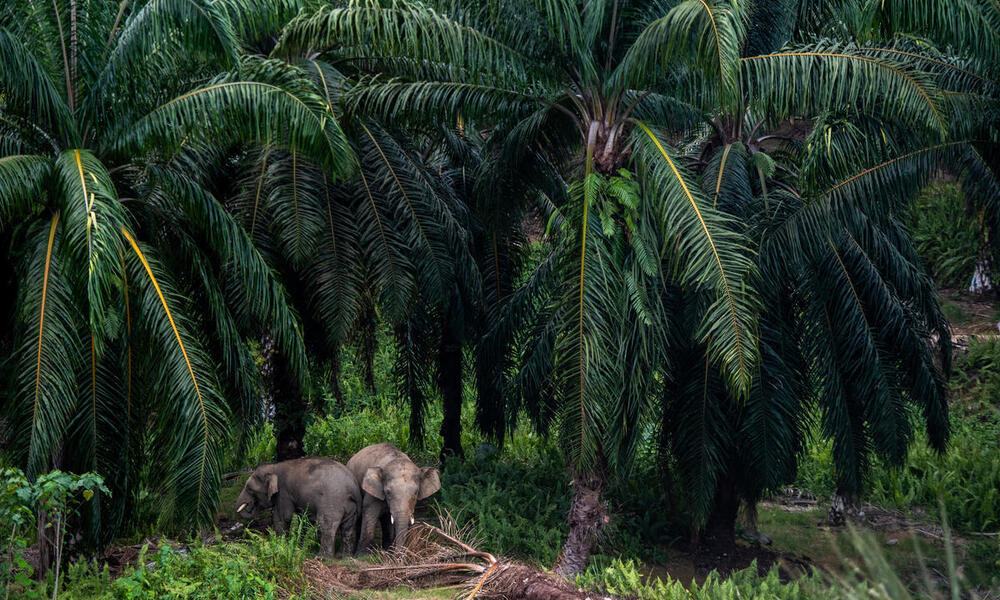 For a while, the only detectable movements are those of the herd lumbering slowly and steadily ahead. With a sudden whoosh, a tranquilizer dart is fired at a female elephant in the group. It takes around 20 minutes for the sedative to take effect. Once it does, and the animal can be approached safely, the members of the elephant collaring team emerge from their hiding places in the brush and spring into action.

The team—comprised of veterinarian Cheryl Cheah and her assistants from the Elephant Conservation Unit at WWF-Malaysia, alongside their counterparts from Sabah’s State Forestry Department—moves together with agility and speed. 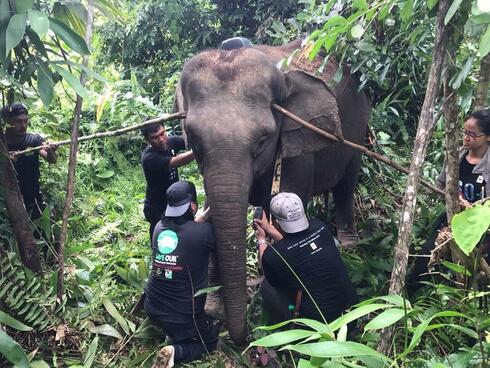 Some make loud noises to distract and deter the other elephants in the herd while another team member quickly places the tracking collar around the sedated elephant’s neck, ensuring the strap is comfortable enough for the elephant, while not too loose that it can get it off, and the transmitter on the strap is functional and fitted right-side up. At the same time, someone else draws blood from the animal’s ear, and another takes various physical readings and measurements, such as tail length, that will later help Cheah determine the elephant’s overall health. The entire process is over in a matter of minutes. Afterward, the elephant is given an antidote to reverse the effects of the sedative, and she is off on her way to reunite with the rest of her herd.

Sabah, a Malaysian state in northern Borneo, is home to a population of approximately 1,500 Bornean elephants. The smallest of the Asian elephants, the Bornean elephant is classified by the International Union for Conservation of Nature (IUCN) as an endangered species. In the last 40 years, Sabah has lost 60% of its elephant habitat to plantations, and elephants are now spending a majority of their time in those plantations or are moving through them to get to fragmented forest patches. With more and more forests cut down to make way for palm oil plantations and other agriculture, the elephants’ shrinking habitat brings them closer and closer to people, increasing the instances of human-elephant conflict in the region.

According to Cheah, there have been as many as 30 elephant deaths in Sabah in the past three years, believed to be a result of conflict with humans. By collaring to track the elephants’ movement and gaining an understanding of where they have been and where they are going, members of the WWF Elephant Conservation Unit and their partners are able to develop strategies to reduce potential conflicts. 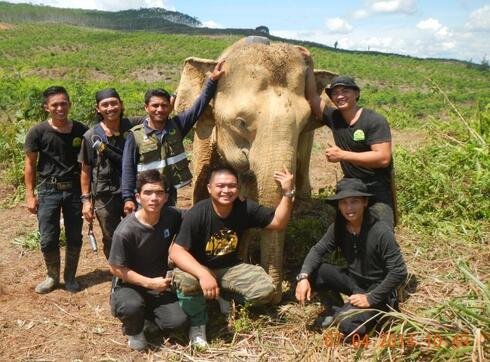 The team with a collared elephant

The elephant collaring program was first established in October of 2013. Since then, Cheah and her team have helped put trackers on more than 25 elephants. Each collar costs roughly $4,000 USD, and the team receives funding to partially cover the expenses from WWF-Netherlands. “The collars give us three to four readings every day, which will allow us to study the elephants’ movements and better understand their range requirements,” explains Cheah.

Knowing where elephants like to roam in the region—if they prefer highlands to lowlands; if herds trek through untouched forests; or if they are migrating through plantations or other areas inhabited by humans—is important information to help protect them, she says.

To complement the data collected from the collars, the team ground truths this information through additional field research. “We follow the target elephants day and night by foot,” says Viccutter Denius, a senior program assistant who works with Cheah. To track the animals, Denius and his partner, Elbatius Sikul, sometimes spend a week or more walking through and sleeping in the forest. They take notes on the elephants’ movements, count herd size, and make other observations useful to the team’s conservation efforts. The work is physically demanding and at times can be dangerous, but Denius says he loves what he does. “Elephants are very social creatures,” he says. “I love learning about their behavior.”

The WWF Elephant Conservation Unit uses the elephant movement data to work with policymakers and plantation owners to find suitable places to establish protective barriers and wildlife corridors. Building blockades to deter herds from land occupied by humans and creating alternative safe pathways for them to move from one area to another helps protect the elephants and the people who live and work near them, creating a future in which humans and nature can live in harmony.