A deep dive into food waste in US schools

In the spring of 2019, WWF, with support from The Kroger Co. Foundation and the US EPA, looked at cafeteria plate waste in 46 schools in nine US cities across eight states. We worked with partners on the ground to share the experiential Food Waste Warrior conservation curriculum: running audits in cafeterias and guiding students to connect the dots between food, waste, natural resources, and wildlife. While not fully representative of the 100,000 schools that participate in the National School Lunch Program, this research represents one of the largest cafeteria waste audit samples collected to date.

Why does it matter?

An estimated 30-40% of food is wasted in America, while more than 41 million Americans face hunger, including nearly 13 million children. At the same time, wasting food wastes water, energy and wildlife habitat. This can no longer be acceptable. Schools, which serve more than 4 billion lunches per year in the US, can turn cafeterias into classrooms and measure the scale of the issue as part of a learning experience, and once armed with data and awareness, empower the next generation of food waste warriors to start looking for solutions.

Using our sample group as a basis for estimation, we saw that national food waste in schools could amount to approximately 530,000 tons per year (excluding milk, which was calculated separately). This roughly translates into:

But what gets measured often gets managed. With minimal interventions, the schools participating in this project saw on average:

If we could reduce food waste in schools nationwide by the 3% average seen in this study, it would be the equivalent of taking 12,400 passenger vehicles off the road for one year.

Food waste is not a one-size-fits-all problem. Schools and districts can find solutions that are best for their community. Participants who engaged in this project measured their waste and used the lesson plans but didn’t stop there. They created new lessons and activities, made posters and other materials to educate their fellow classmates, set goals to learn about and reduce waste, wrote to their administrators, and much more.

Select a state to see a small sample of what teams learned from each participating city: Atlanta, Boulder, Cincinnati, Columbus, Indianapolis, Nashville, Phoenix, Portland, and Seattle. Through these stories you can see some of the major reasons why waste happens, and some of the opportunities for solutions start to emerge. 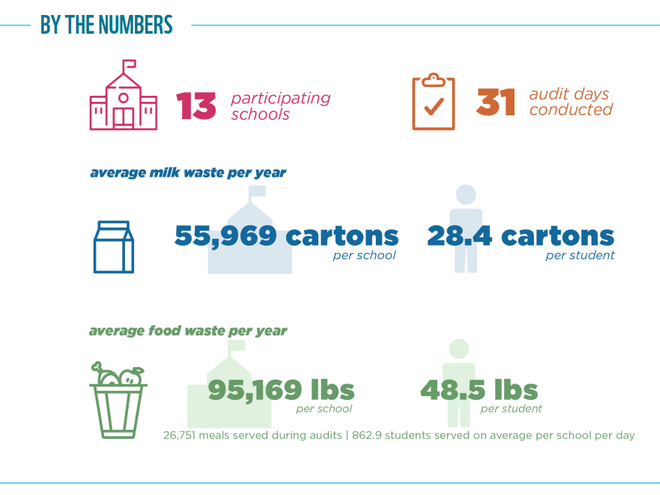 Success: The participating food and nutrition directors supported this project and have begun to look at creative ways to increase student consumption of healthy foods through behavioral economics strategies, school garden participation, and starting composting programs where feasible.

Aha moment: Working with high school student programs was a huge success! The elementary students loved having the "big kids" there, and the visiting students were extremely helpful in facilitating the audit process. 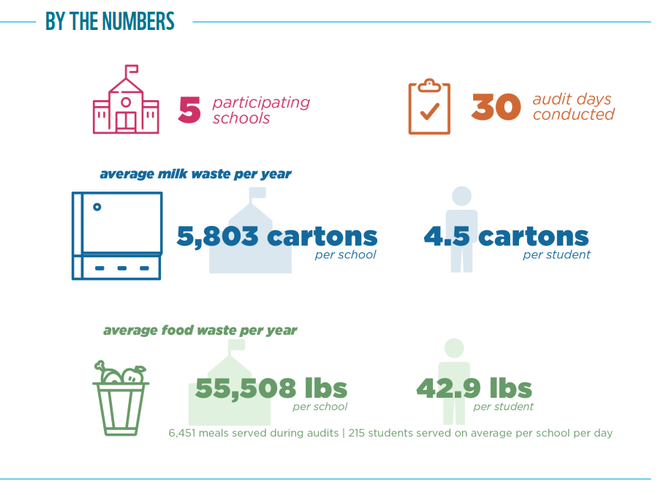 Challenge: "Some of the food waste audit days were very challenging for me simply from having no down time – all of my planning time was spent in the cafeteria," said one teacher. "But it was an inspiring project, and if something was going to add a little stress to my life, this was certainly worth it."

Success: At each school, students were empowered to choose the food audit setup order and make changes as they saw fit. Each group of students had a unique way of presenting the data collection to their peers and making it a community-wide project. It ended up being a student-led project and had a much greater reach than if the students had remained in support roles. "I was THRILLED that the kids were SO into the idea of being a warrior," said one teacher.

Aha moment: At the middle and high schools, there are typically many trash cans in various places around the cafeteria, so making all disposal occur in a single audit area provided an eye-opening look at how much waste was being generated daily. Boulder did not have as high a level of milk waste as other districts. One possible reason could be that the school uses milk dispensers, which in some cases have shown to reduce milk waste. 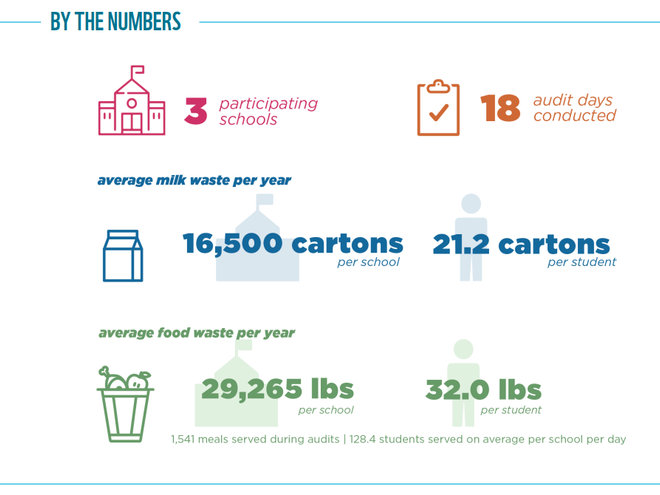 Challenge: Coordination necessary to implement this project was the biggest challenge, particularly because there are so many stakeholders involved: teachers, students, parents, and administrators.

Success: Teachers and administrators went above and beyond, from translating the materials into Spanish to ensuring all food waste was gathered from younger children. Administrative, cafeteria, and janitorial staff all lent a hand as well.

Aha moment: During several audits, fresh fruit served to students was not ripe, which drove the amount of food waste up dramatically. Overuse of condiments at the salad bar also led to wasted food. In one school under audit, milk is the only drink option aside from water bottles for purchase. There is no water fountain available, so students take milk just to drink a little of it, leading to a higher amount of milk waste. 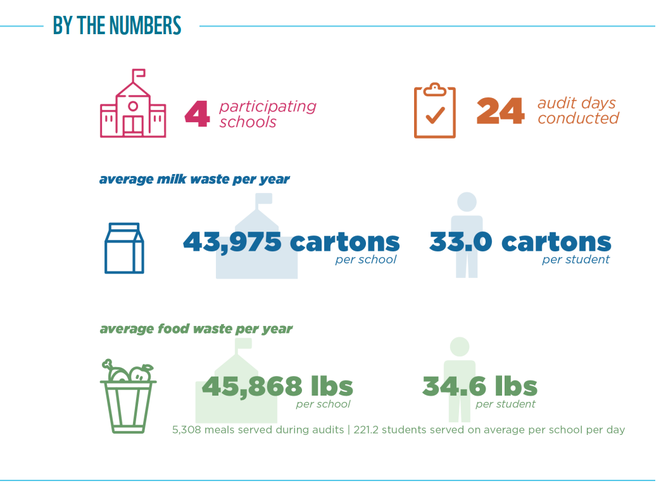 Challenge: Some kitchen staff were hesitant to implement the share table because of potential risks to health and fear of breaking the confusing laws surrounding sharing food in school cafeterias.

Success: More than half the usual lunchtime waste was diverted to composting, which reduced landfill waste and made the custodial staff's jobs much easier and cleaner every lunch period.

Aha moment: The share table is an essential element of waste-reduction; it's a good idea to remind students during lunch to participate in the share table. Most of the share food was eaten when adult staff members walked around the cafeteria and offered it to students. This was also an opportunity to engage with students about the importance of eating everything they take and of healthy eating. 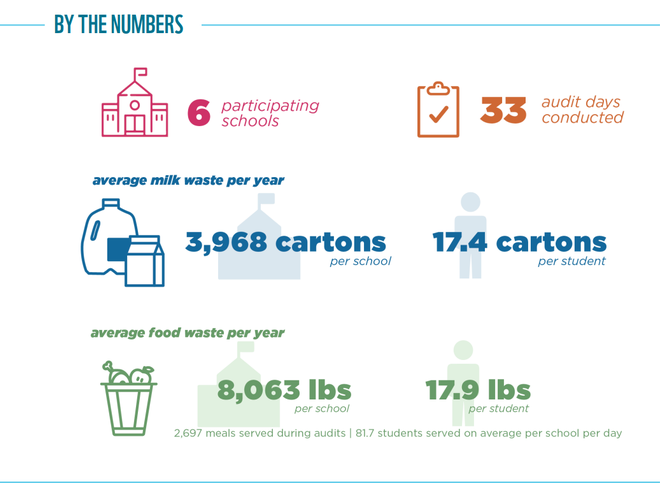 Challenge: It's challenging to make a new program a priority, especially in the spring when it conflicts with standardized testing, spring break, and end-of-year activities.

Success: Regular reminders about the "why" of the project helped it succeed. At each audit, students and sometimes teachers would announce the reason for the project. In some schools, students created promotional materials that staff placed around the school.

Aha moment: Helping custodial staff understand the project helped them embrace the process, and it is essential to recognize their contribution and thank them after every audit. 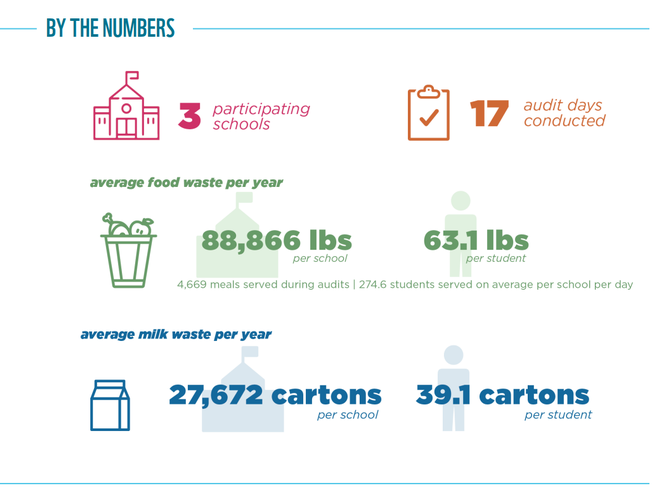 Challenge: While large quantities of milk were wasted, some cafeteria managers kept advising students to take milk even though they were aware it isn't required. Presumably, this was to ensure compliance with reimbursement regulations, which dictate the specifics of meals for which the USDA will reimburse school districts.

Success: The lead teachers were amazing; all three have been advocates for their schools and are leaders committed to sustainability. In all the schools, the janitorial staff was instrumental in formulating a process to meet the needs of the school and provided much-needed support.

Aha moment: The amount of waste per student decreased simply from having project representatives in the cafeteria share the reason for the project with students. After witnessing the first audit, one student stated, "I am never wasting food ever again." 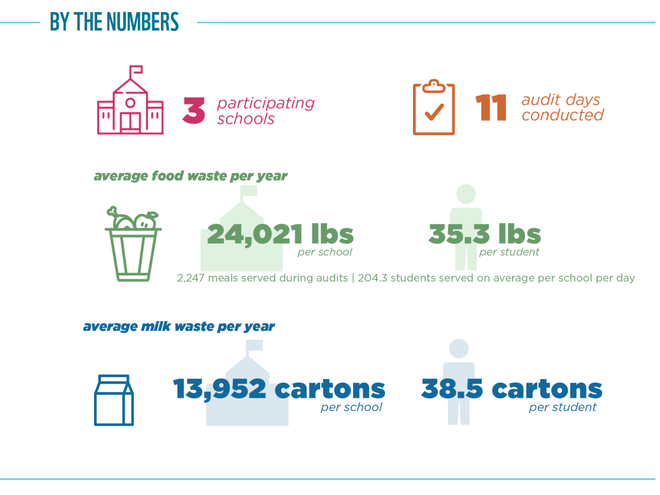 Success: This project has led to the development of a new initiative that will bring together teachers, cafeteria staff, and researchers to plan and develop a tool for teachers and students to evaluate cafeteria processes for sustainability.

Aha moment: Students in kindergarten and first grade received help filling their trays without getting a choice about what to take, a tactic meant to help them move quickly through the line without spilling food. However, it reinforced a "take one of everything" mentality. 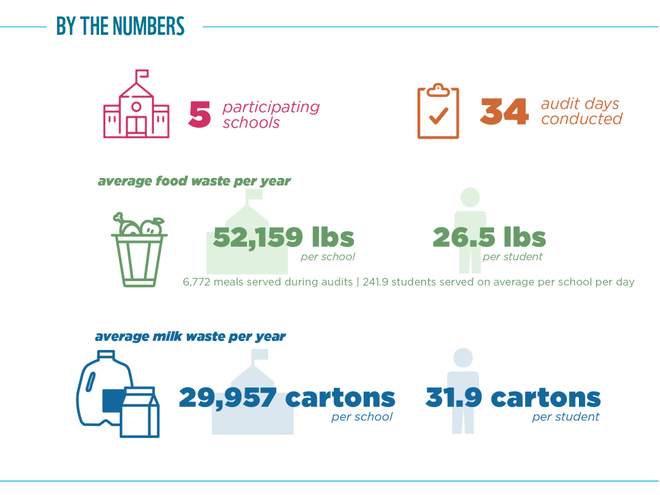 Challenge: Universal confusion surrounding "offer vs serve." The name is misleading; a better way to phrase the term for increased understanding would be "offer, NOT serve" or "offer INSTEAD of serve."

Success: Engaging the students provided leadership and project-based learning opportunities and helped underscore the need to have the whole school community involved.

Aha moment: Milk waste was found to be the largest category of waste on average for our schools, with significant financial and environmental costs. The initial audits revealed that more milk waste was happening than was previously known, and this data did not include breakfast, where milk is used in cereal. We see a strong business case for milk dispensers in schools, which could both cut milk waste and reduce the district's food costs. 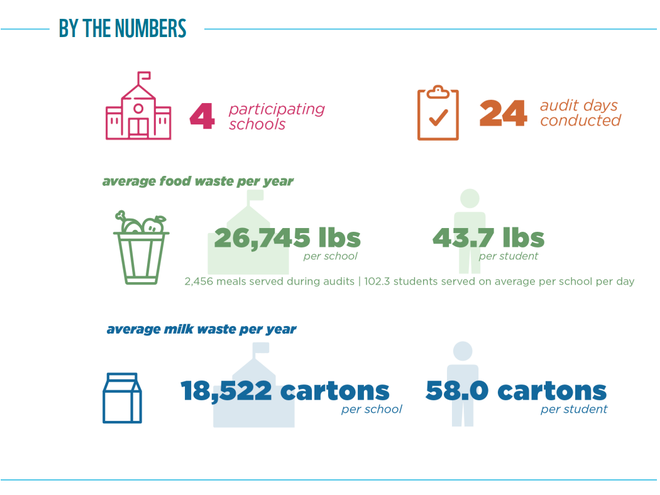 Challenge: It seems very unlikely that school staff members would have time to pursue food waste reduction practices without assistance from outside resources. Many school staff expressed feelings of being overworked and unable to take on extra initiatives like this.

Success: The success of this project was in part because the team had buy-in and support for food waste reduction at the district level from the start, including the district’s resource conservation specialist. Many districts don't even have that position.

Aha moment: There is a lot of confusion in schools about the Offer vs. Serve provision of the National School Lunch Program. This confusion leads to students taking items they don't want and don't intend to eat or drink (especially milk). Students do not have adequate time to eat their lunch in the typical 20-minute lunch period, leading to waste. Student interviews revealed that they throw away milk primarily because they lack the time to consume it.

What Can We Do?

Though there are many challenges, from lack of resources, confusion over serving policies, to deeply entrenched behaviors, there are also many opportunities for creativity, learning, money savings, student empowerment, and food waste reduction. While we can all try to be better about reducing waste in our homes, this report contains recommendations for both policy makers and school administrators on how to get started in cafeterias.

Together we can foster a learning environment that teaches the next generation a new respect for food and empowers them to take action to ensure it isn’t wasted.

Image attribtion: CO2, water, and USD icons made by Freepik from www.flaticon.com