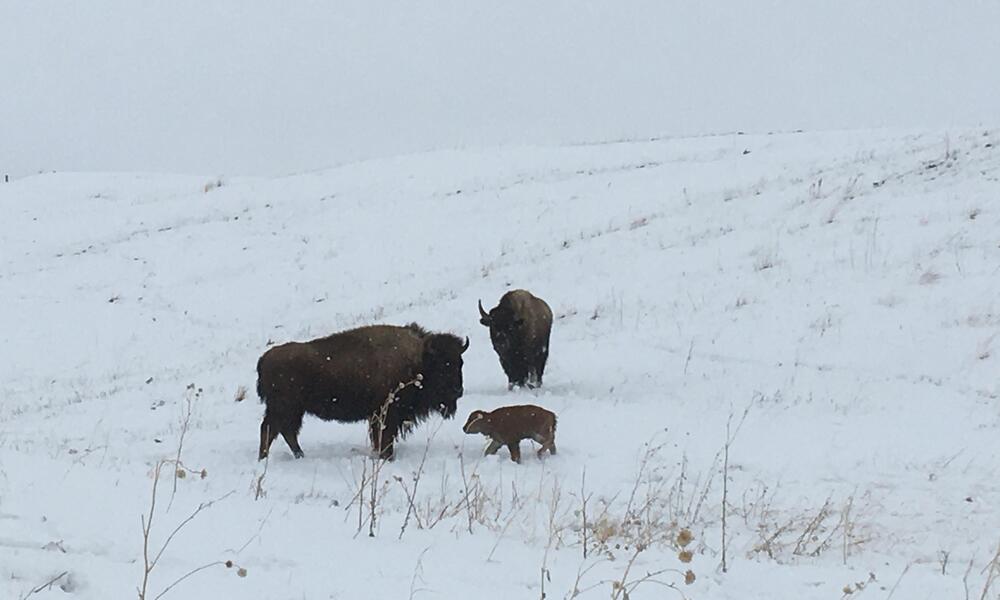 As fresh snow redecorated the tranquil plains of the Wolakota Buffalo Range, new and precious life entered the world. Two bison calves took their first breaths amid the falling flakes—the first to be born on this ground in at least 140 years.

The frisky duo appeared healthy and had no problem sticking with their mothers despite the chill. Their birth marks a major milestone for a project that aims to bring 1,500 bison to the land of the Sicangu Oyate, commonly known as the Rosebud Sioux Tribe in South Dakota.

This past fall and winter, the Rosebud Economic Development Corporation (REDCO), with support from WWF and Rosebud Tribal Land Enterprise, transferred a total of 135 bison to the Wolakota Buffalo Range from Badlands National Park, Theodore Roosevelt National Park, and American Prairie Reserve. This 27,680-acre area of native grassland, when at capacity, will become North America’s largest Native American-owned and managed bison herd.

“The birth of the first bison calves at Wolakota Buffalo Range is a wonderful sign of renewal for the Sicangu Lakota people and their lands,” said Dennis Jorgensen, bison program manager for WWF. “WWF is thrilled to be a partner to REDCO in projects like this that will bring about transformational change through indigenous leadership.”

The first photos, taken on a cellphone by Jimmy Doyle, bison manager of the Wolakota Buffalo Range, appear a bit dark and distant because he did not want to disturb mother and calf in the early days as the mothers tend to be very protective.

Fittingly, cows—the term for female bison—from both Badlands and Theodore Roosevelt gave birth. More calves are expected in the coming days and weeks.

In March, WWF supporters and Toyota Motor North America came together to raise $342,000 through a WWF campaign to expand the range and make more than 20,000 acres of native grassland habitat accessible to the bison at Wolakota Buffalo Range by fall 2021.

Massive herds of bison once roamed the entire Great Plains and much of North America. Western colonization decimated those populations in a matter of decades, but now projects like this are helping to bring large herds back to Indigenous communities where their return is embraced. WWF's goal is to restore five herds of at least 1,000 bison each in the Northern Great Plains by 2025.

To date, the organization has invested more than $3 million in bison restoration efforts with Indigenous communities in the Northern Great Plains. The Wolakota Buffalo Range will provide ecological, economic, and cultural benefits to the Sicangu Oyate and exemplifies the visionary work that Indigenous communities are spearheading, which WWF wholeheartedly supports.

This exciting project is being advanced by a partnership between the REDCO and WWF with support from Tribal Land Enterprise, the Rosebud Sioux Tribes' land management corporation, and the U.S. Department of the Interior.