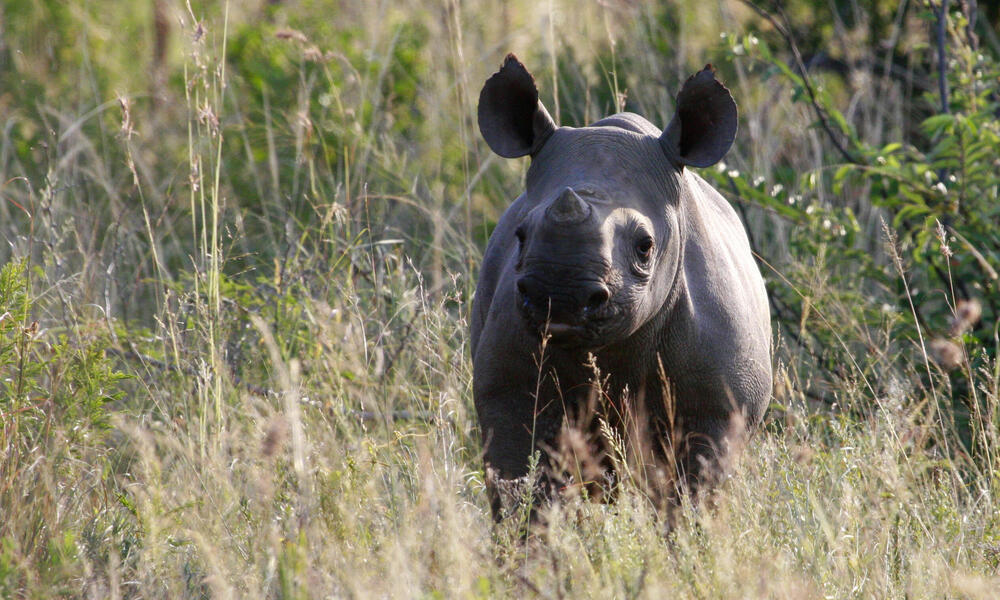 Looking back over years of moving black rhinos to create new populations as part of the Black Rhino Range Expansion Project, it’s worth noting how capture and release techniques have improved. Read on to see how WWF safely and efficiently completes this essential conservation measure.

Sometimes black rhinos need to be moved from inaccessible, wilderness areas by helicopter.

When the Black Rhino Range Expansion Project began the rhinos were originally airlifted in nets. Then in 2012, project leader Dr Jacques Flamand saw photos of rhino in Namibia being airlifted while strapped by the ankles.

He suggested that this method be tried during the next project translocation.

Since then, this has been the technique of choice for moving rhinos out of tricky terrain—but only for short stretches until they can be loaded onto a truck. They are usually airborne for 10 minutes or less.

The advantage of this airlift technique is that fewer people are needed on the ground because the rhino does not have to be rolled onto a net. This saves time and is kinder to the rhino which is unconscious for a much shorter period.

A tranquilized black rhino is suspended from a helicopter and suffers no ill effect. The trip lasts less than 10 minutes and enables a darted rhino to be removed safely from difficult and dangerous terrain.

Dr Jacques Flamand, leader of the WWF Black Rhino Range Expansion Project, has just administered an antidote to wake up a black rhino, which has been released on to a new home.

“This is now the method of choice because it is quick and harmless to the rhinos—always the main concern in these operations,” says Dr Flamand, a wildlife vet who has overseen the translocation of thousands of rhinos during his career. “We all want what is best for the rhinos under our care. With this method, there is no evidence of any ill effects. All the animals walk normally on wake-up. They also start eating immediately after release, a sure sign that they are not in pain. The limbs of an animal are in proportion to its body mass, so whether we are talking about a mouse or a rhino, hanging them by four feet is proportionately the same and the muscles, connective tissue, bones and joints can cope with lifting by that means.”

Once the animal has been airlifted to a place more accessible to vehicles, it is put into a crate which is then loaded onto a truck and the animal is then driven to its destination.

Recently, we have started to dehorn rhinos as a protective measure and to deter poachers before they are moved to an enclosure for quarantine or to a recipient site. Dehorning does not harm the rhino in any way as the horn is made of a non-bony, hair-like structure and the procedure is done under sedation. The horn will grow back to normal size within a few years.

Over the years release techniques have also changed.

In the early years of the project, when the crate doors were opened at release, the animals would charge out, sometimes attack vehicles in the vicinity, and then disappear into the bush. This was obviously not ideal for the rhinos.

Today, when it comes to the release, the rhino is sedated again while still in the crate. The doors are opened to allow it to leave the crate and the rhino usually falls asleep right outside. The majority of people will leave while the animal is asleep so that when it wakes up, there is no disturbance. One person will stay with the rhino to give the antidote once everything is quiet. After it wakes the rhino will get up, wander around and then usually start feeding or drinking of its own accord.

This has proved to be the best method for a quiet, successful release.