WWF's Black Rhino Range Expansion Project (BRREP) in South Africa began in 2003 and, thanks to a dedicated team, has grown to be a massive success. A critical part of that team is Dr. Jacques Flamand, the veterinarian who leads the project.

Can you tell us a little about yourself and background?

As a child, growing up exposed to the wilds of South Africa and being inspired by books like Jock of the Bushveld, I always wanted to be an explorer or a game ranger. My father always said “get a profession that lets you do what you like”. So, I hit on becoming a vet, obtaining my veterinary degree from Cambridge University in the United Kingdom. During my schooling, I was lucky enough to spend long summer vacations in Kenya and Uganda, thanks to our lecturers’ working relationships in East Africa. Those experiences exposed me to the veterinary work that I am still doing today.

After attending university, I returned to South Africa where I completed my post-graduate degree in wildlife management, becoming the only field vet at Kruger Park in 1975. Afterwards, I worked for the then-Natal Parks Board (now KwaZulu Natal Wildlife provincial conservation organization) for 14 years, helping to capture and relocate some 700 white rhino in my first two years there. I was then asked to lead an effort against a tuberculosis (TB) outbreak among the rare Arabian oryx in Saudi Arabia, spending over six years dealing with the outbreak. When TB was discovered in the oryx, due to the rarity of this species, I decided to isolate and treat all the infected animals. I also removed the calves at birth to create a new, clean generation–something that had never been done on animals before. This new generation grew up to be free of TB and could be released into the wild, a huge success for this rare species. 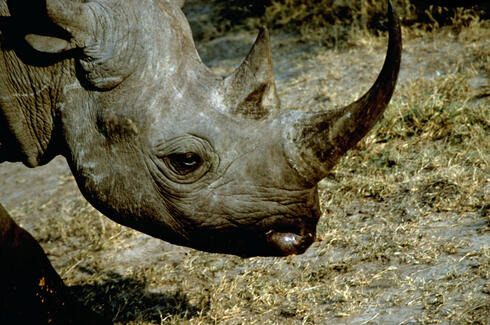 In 1998, the Zoological Society of London asked me to start a veterinary programme in Chitwan National Park in Nepal to improve both their handling of wildlife and the health of the livestock outside the park. The hope was that these efforts would also help improve relations between neighbors and the park authorities. After four years in Nepal, I returned to South Africa to embark on WWF’s Black Rhino Range Expansion Project, originally a three-year project, now in its 18th year.

You lead WWF’s Black Rhino Range Expansion Project, what is this and what does your role entail?

In the early part of the 21st century, the growth rate of the critically endangered black rhino population in South Africa was declining. This was likely because they did not have enough space for populations to grow – ideally, each individual rhino needs 4 square miles of habitat. When given sufficient space to roam and spread out, their reproduction rate improves. To support population growth for this species, we needed to find more land so that we could relocate about 20 black rhinos per year, increasing their distribution across South Africa and giving them a better chance to reproduce. But finding a new home each year for that many rhinos is not easy.

Given the amount of land each individual rhino should have, to translocate them in groups of 20, we needed to find areas of land that were around 77 square miles per group. There was no money to buy such land so my job was to seek out suitable land and to create partnerships between landowners who would be passionate enough to devote their land to black rhino conservation, and who had the resources to do so. Most ranches that expressed interest were too small to qualify alone, so we negotiated with neighbouring landowners to drop the fences that separated their properties and blend their lands to create viable, large blocks of habitat for the rhinos.

The project started in 2003 and since then, we have created 12 new black rhino populations in South Africa and one in Malawi. In 2019, we reached a major milestone – our 200th black rhino was relocated – and as of today, we have moved 216. Of the 12 populations of rhinos we’ve translocated, five now live among local community-owned lands in some form or another, thereby making local communities real stakeholders in rhino conservation.

More populations are envisaged but it is becoming increasingly difficult to find large blocks of land, and the prospect of black rhino on one’s land is less attractive due to the costs of protecting them from the increasing poaching pressures. 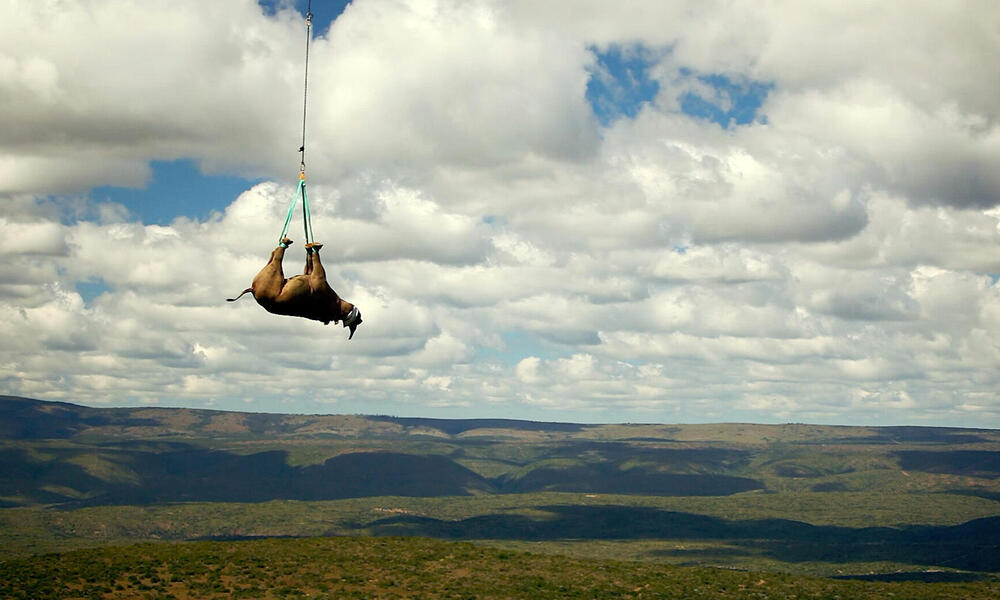 Dr. Jacques Flamand (far left) prepares to tend to an anaesthetised rhino that has been airlifted from a wilderness area and is being gently released to the ground by helicopter.

How do you help ensure these rhino translocations these are successful?

First, you must have an experienced and caring capture and transport team. All 20 black rhinos should be introduced to their new habitat within days of each other so that they are all equally naïve to the new site and therefore equally nervous about their new circumstances. We know from experience that placing black rhinos into already-established populations is a recipe for disaster as the established ones kill any newcomers invading their land. Introducing all the rhinos to a new home around the same time hasn’t resulted in any deaths from post-release fighting. Lastly, the level of protection from poaching in the land block where they are placed must be at least equal to, if not better than, where they came from. This is a principle that we adhere to strictly, but in reality, nowhere is safe for rhinos these days.

What are some of the biggest challenges you face in your job?

I would say the two major challenges are:

What’s a memorable experience or story you can share from your work with rhinos?

There are so many but one the stands out is from when I was working for the Natal Parks Board. Back then, we didn’t have helicopters to work with routinely so I had to dart all game, including black rhinos, on foot. Because they are an endangered species, I’d also have to examine any injured black rhinos to determine whether they needed medical attention, and this could be dangerous. 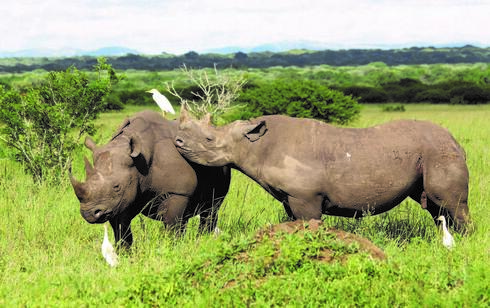 I recall approaching my first rhino on foot, hoping it couldn’t hear my heartbeat. I had climbed a tree to get a better look at a facial wound it had, however the only tree I could climb was a flimsy one about as thick as my arm that I could only climb to about 5 feet up. The rhino chose to walk straight to me and started sniffing at my foot as I sat completely vulnerable in this skinny tree. Needless to say, if the rhino had chosen to toss its head at the tree, I would have fallen straight onto it.

What’s one accomplishment or moment you’re particularly proud of?

At the beginning of the Black Rhino Range Expansion project, the most satisfying thing for me was to reverse the historical divisions created by man on the land. Removing fences, cattle ranches, and other agricultural uses of that land was a real benefit, not only to black rhinos, but to other species. Animals like wild dogs, elephants, lions and vultures have benefited from having larger blocks of land created for the black rhinos. So it expanded more viable conservation of land and of other species. Some areas are now registered as formal protected areas, remaining formally protected regardless of whomever owns the land in the future.

What do you love about being a wildlife vet?

I have loved my choice of becoming a vet. It has allowed me to mix my desires to be involved in wildlife and to do something that was fun. A wildlife vet’s life is never boring, particularly in the formal conservation sector I was in. You are called to deal with a whole range of species at any time.

In my life I have had to innovate many times; there is no script with wild animals. Whether it was testing new drugs on wild rhinos, bringing airlifting techniques into common usage, or figuring out how to fit 17 black rhino onto one cargo plane, these are all things that, while they were new at the time, are becoming increasingly routine. Of course, one cannot develop these things alone, you have colleagues to help as part of a team and strong friendships are forged along the way. That, too, is most satisfying.

I like to think that I have contributed to conservation in the broader sense and that this legacy will live on. 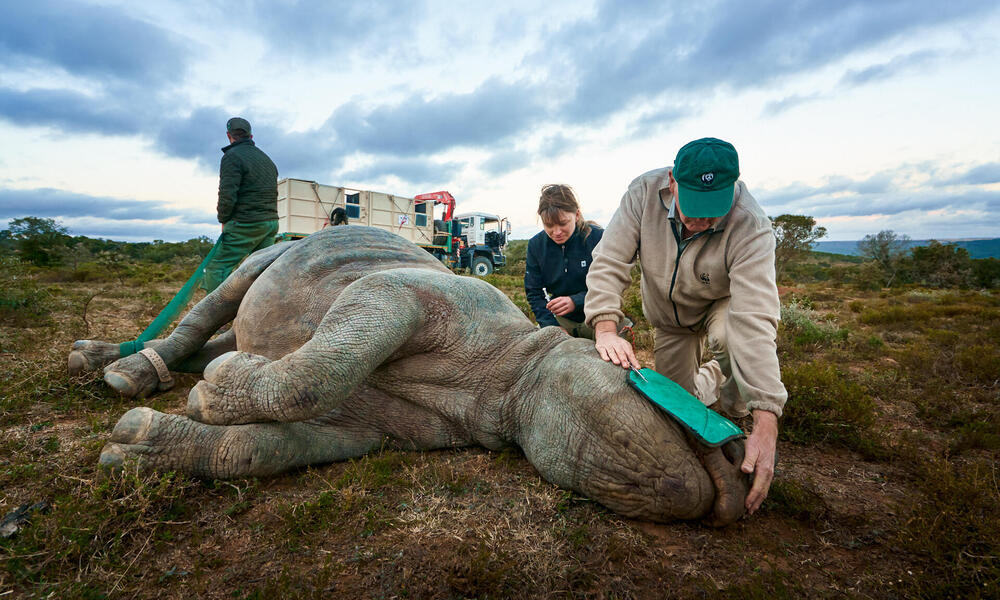 Dr. Flamand with a sedated rhino