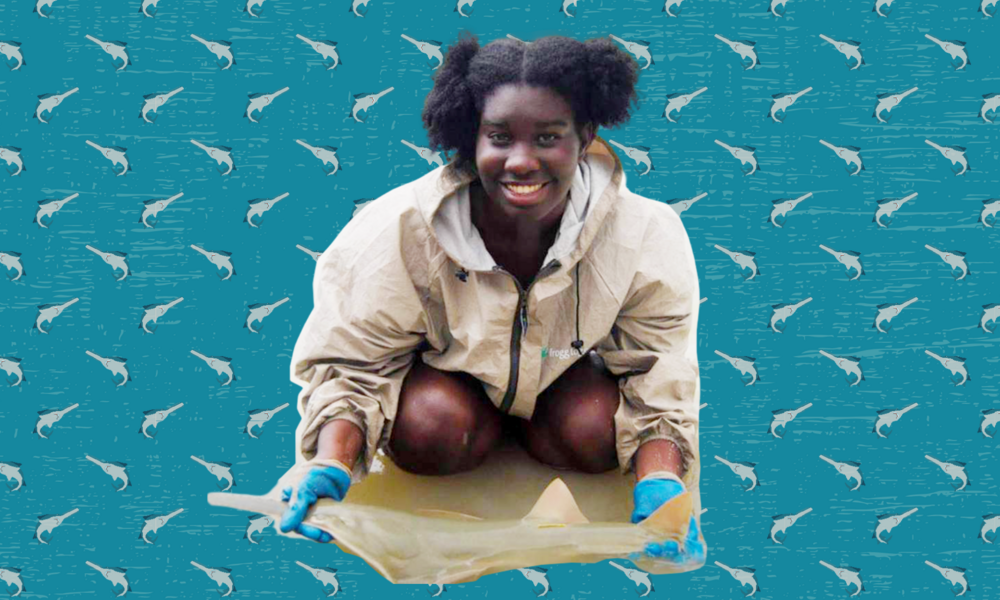 WWF is elated to announce Jasmin Graham, MSc., as winner of the third-annual Conservation Leadership Award. This award aims to give the next generation of conservation leaders access to a global platform and experts, and provides a financial prize that recipients can use to further their professional or educational goals related to their conservation work.

Graham is a marine biologist, environmental educator, and social justice activist. She is the CEO and president of the organization Minorities in Shark Sciences. 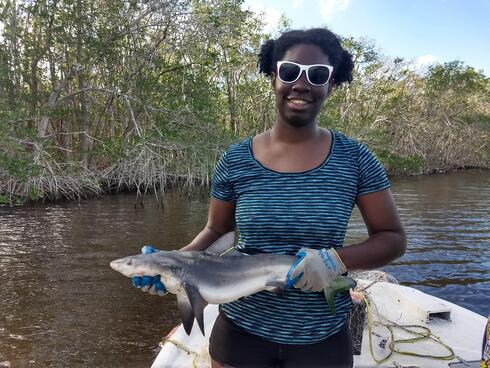 Growing up, Jasmin’s family often went fishing, so she was always interacting with the ocean. She credits her father with teaching her how to satisfy her scientific curiosity by researching encyclopedias at the library. In this photo, she is preparing to release a juvenile bull shark during a scientific survey in the Everglades.

“I'm excited to receive this award because I am eager to connect with people throughout the large international network of WWF who are working towards similar conservation goals,” Graham said. “I'm also looking forward to using my platform to bring social justice and racial equity to the forefront of conservation dialogue.”

Originally from South Carolina, Graham currently works on shark research and conservation in the Tampa Bay region of Florida. Her focus falls particularly on the smalltooth sawfish, a critically endangered species of ray found in the Atlantic. Graham uses a novel approach to assess the smalltooth sawfish’s risk of bycatch—the accidental capture in fishing nets and gear that often result in death. It’s hard to get an accurate number of how many of them die this way because only about 2% of fisher boats have a trained observer on board who can identify bycatch species. By combining two methods of tracking sawfish movements with data on fishing boats, Graham devised a method that estimates the probability of fishers coming into contact with sawfish. She hopes that this expanded data can inform strategic policy interventions that help protect this rare species. Graham hopes for better-informed regulations on bycatch, as well as the types of fishing gear allowed.

“Sawfish are an umbrella species,” Graham said. “They live in mangroves, so if you protect mangroves because you are trying to save this critically endangered species, you are also protecting everything else that [benefits from] mangroves.”

Graham is at the forefront of making marine science more inclusive. While talking about her experiences as a Black marine scientist on Twitter, Graham met three other people who shared her values. Together they co-founded Minorities in Shark Sciences (MISS), an organization that advocates for equity in marine science, and particularly for removing the systemic barriers that make women and people of color underrepresented in the discipline.

“None of us had ever met another Black woman that did shark science. And so to have all of us there going ‘Oh, I’m a shark scientist too!’, ‘Me too!’, ‘Me three!’, was all very exciting,” Graham said.

The MISS team during a field workshop

Barely a year into its existence, MISS is already making strides. Following an incredibly successful fundraiser, MISS began providing workshops for budding scientists, as well as advocating for paid internships and language accessibility, facilitating a mentorship program, and fostering a tight-knit community that supports its members on their career path in shark sciences. Graham hopes that 20 years from now, there is no longer any need for organizations like MISS because the science field will be inclusive and equitable for people from groups that currently face barriers.

Fighting for inclusion of underrepresented groups

There is still much work to be done to make the sciences a more inclusive space. Earlier this year, Graham was a key organizer of the POSEA Conference for underrepresented communities in Marine Sciences (the name is a play of words on the acronym POC, which stands for ‘people of color’). Teaming up with other organizations led by underrepresented groups, Graham worked to provide a welcoming and enriching space for scientists from diverse backgrounds to showcase their research and discuss their experiences in the field. Unfortunately, the organizing team was barraged with disapproving and even racist reactions, with someone going as far as to submit a hate-speech filled abstract.

“Those were a rough few weeks,” Graham said. “We were even worried that the conference might get infiltrated.” To shield the team from seeing all the hateful messages, leaders established a process by which supportive allies filtered those out. Thankfully, the conference proceeded smoothly, receiving international attention and overwhelmingly positive feedback. There are already plans for a 2022 iteration.

Experiences like this are why Graham is determined to persevere in her work as a science communicator, social justice activist, and advocate for inclusion and equity in marine science. She plans to use the funds from the Conservation Leadership Award for her research on smalltooth sawfish in Tampa Bay. She sees great opportunities for education on sawfish too, and hopes that increased public awareness of the plight of the species can lead to much better management of its Tampa Bay population.

“I hope Jasmin will bring a perspective that enriches the world of conservation and WWF,” says Alejandro Pérez, WWF’s Senior Vice President of Policy and Government Affairs who served on this year’s award selection committee. “By recognizing her, WWF sends a signal that we value her achievements as an innovative researcher, and also her views as an advocate for communities that not always are fully represented in the environmental field.”

To hear more about Jasmin and her work, tune in to our virtual conversation with her in December on our YouTube and Facebook channels. For media inquiries of Jasmin, please message her through her contact form.