Predators of predators: the snaring crisis threatening the survival of Asia's big cats

From the dense jungles of Southeast Asia to the sprawling forested foothills of the Himalayas, big cats roam across a vast range of landscapes in Asia, often elusive and alone, in search of prey and mates. Whether tigers, leopards, or snow leopards, these big cats are perfectly engineered and adapted to roam and hunt in the most extreme conditions on the planet.

But despite all their strengths, big cats are clinging to survival. One of their biggest threats? Snares. These rudimentary traps that people have set by the millions on forest floors and snowy mountain pathways across Asia are barely visible to the eye and a fatal danger to all wildlife.

This report finds distressing evidence of documented snaring cases involving a minimum of 387 big cats across seven Asian countries between 2012-2021, with a majority of cases documented outside protected areas.

In Malaysia’s Belum-Temengor Forest Complex, one of the world’s oldest rain forests and part of the largest continuous forest in the country, a team of rangers were walking through the thick, dense vegetation carrying out a routine patrol. This pristine area is home to 14 of the globally threatened mammal species, including the Asian elephant, sun bear, and Malayan tapir. These rangers are determined to protect them.

Suddenly, they heard a noise that stopped them in their tracks: a thundering roar, accompanied by groans and growls, coming from only a few feet away. Another rare and critically endangered species that roams Belum-Temengor is the tiger.

The sound of the roar did not move closer or further away.

The team bravely decided to approach what they suspected was an injured animal. They found a tiger, larger than an adult human, lying on the ground, held fast by the tightened noose of a thick cable snare that ripped deep into its flesh. The team removed the snare and sent the tiger to a facility for treatment, but unfortunately, the big cat died two weeks later from an infection.

This young male tiger is one of untold numbers of snare victims. Experts estimate that people set over 12 million snares every year throughout protected areas in Cambodia, Lao People’s Democratic Republic, and Viet Nam. While this is an astounding figure, the total number of snares laid across Asia is likely much higher.

In Malaysia, snares are a key reason tiger numbers have plummeted to fewer than 150 individuals. One landscape—Belum Temengor—lost over half of its tigers in a two-year period from 2016-2018, mainly due to snares.

“One time I was patrolling, I was checking around one of my areas. In that single day, I found a hundred wired snares,” said Merapi Mat Razi, a senior member of an Indigenous patrol team from the Jahai tribe in the Belum-Temengor Forest Complex. “I found many animals caught—the sun bear, tiger, wild boar, barking deer, and many more. I found skulls. I felt furious. I destroyed all those snares, a hundred of them in a day.”

And these snares don’t discriminate, trapping a variety of animals. A new WWF-TRAFFIC briefing highlights how big cats across Asia, including leopards, snow leopards, and Asiatic lions also suffer from the widespread use of this silent killer throughout their range. 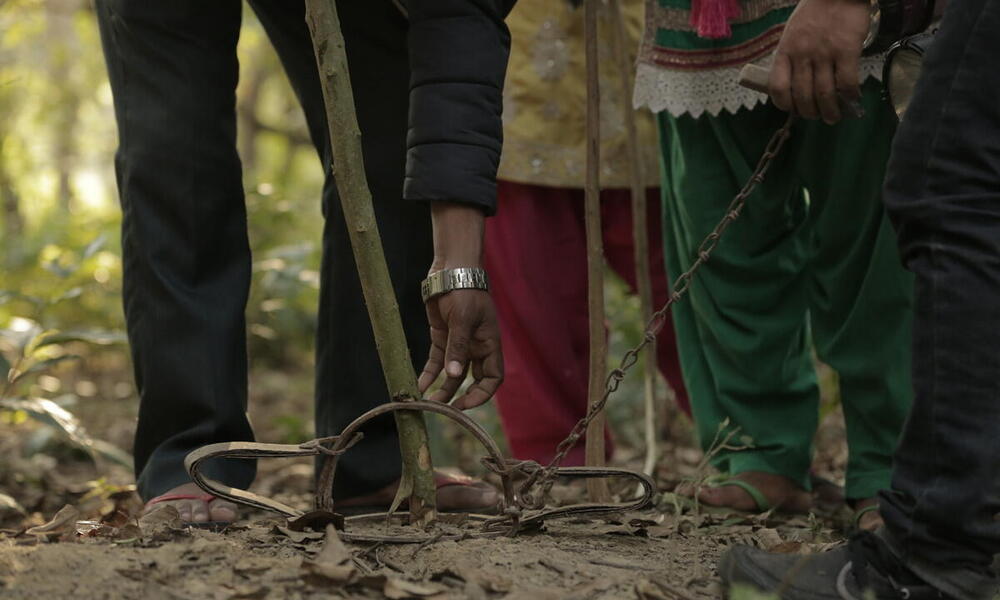 Snares—flimsy-looking flexible nooses made from brake cables, wire nylon, bike clutches, rope, and other cheap and widely available materials—kill predators at the top of the food chain. And most snares are barely visible.

“It’s very simple to remove a snare, but it’s difficult to find one,” said Qiu Shi, a member of an all-female patrol team at the Dongning Forestry and Grassland Bureau in Heilongjiang province of Northeast China. 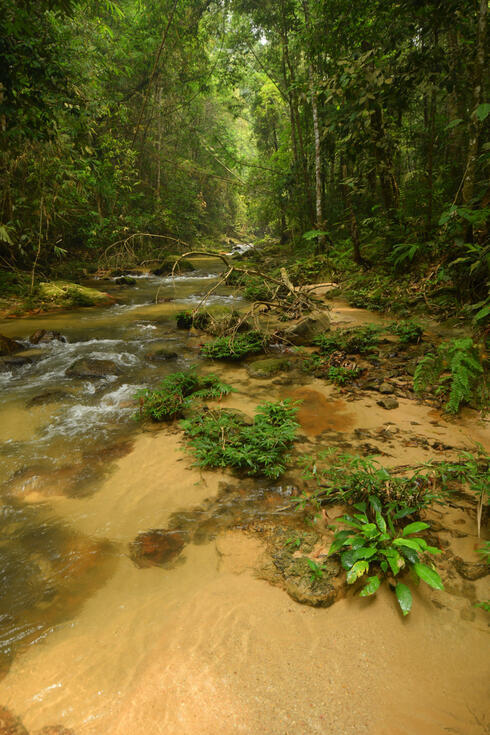 Snares, often hidden by leaves, dirt, and dense undergrowth, are hard enough to spot on forest floors, especially so where Qiu Shi works. During winter when temperatures can drop below 4 degrees Fahrenheit, she and her teammates are often left to trudge through knee-deep snow without knowing what might lie underneath.

“If one steps on a trap, you might get injured, so you need to be very cautious,” she said. “Rangers are good at uncovering invisible snares, but animals are not.”

If trapped by the leg, a snare could break an animal’s bone. If wrapped around its neck, the snare forces a cruel struggle as the animal tries to free itself. The more the animal moves, the tighter the snare cinches, leading it to a slow, excruciating death from the injuries or from thirst and starvation. And even if they’re able to escape, animals will likely die later due to persisting infections that cause pain or limit their mobility and ability to hunt.

Half of the snaring cases of tigers in mainland Asia were targeted for poaching, according to WWF-TRAFFIC’s new briefing Snaring of Big Cats in Mainland Asia.

Poachers kill big cats for traditional medicine, spiritual amulets, fashion, or home décor. The illegal wildlife trade is the fourth most lucrative illegal trade in the world, just after the trafficking of narcotics, humans, and arms.

Much of the wildlife targeted for snaring have been identified as mammals with the highest risk for zoonotic disease transmission to humans. Commercial snaring also threatens the food security of local communities that can depend on wildlife meat for sustenance. 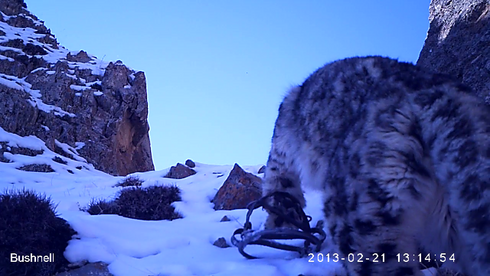 The Snaring of Big Cats in Mainland Asia research summary report shows that most snaring cases take place outside protected areas—65% for tigers, 93% for leopards—where big cats often die in snares set for ungulate species, either to prevent crop-raiding or to poach.

As a member of her local community-based antipoaching unit and the chairperson of her local rapid response team, Sapika Magar, who lives in Nirmal Thori village in Parsa, Nepal, leads a team of volunteers to mitigate human-wildlife conflict and help confiscate snares, report incidents of wildlife crime, and conduct patrols, working closely with rangers and government authorities in the area.

Nirmal Thori, is in the peripheries of the Chitwan-Parsa-Valmiki Tiger Complex, a large, forested tract with a shared boundary with India of approximately 62 miles, a key area of movement for elephants, tigers, and leopards. The complex is part of the Terai Arc Landscape, one of the most populated homes for tigers—both in terms of people and the big cat.

There are over 400 community-based antipoaching units in Nepal, led by teams of youth like Magar, who work with rangers and park authorities to keep the forest trails safe for wildlife and people. Documenting signs of poaching, dismantling threats on tiger trails, and assessing the health of forests, members of these units are key allies in the effort to address snaring.

The trust and support of local communities earned by regular and constructive dialogue with rangers are known to be one of the most critical factors in reducing the likelihood of poaching activities in protected areas. 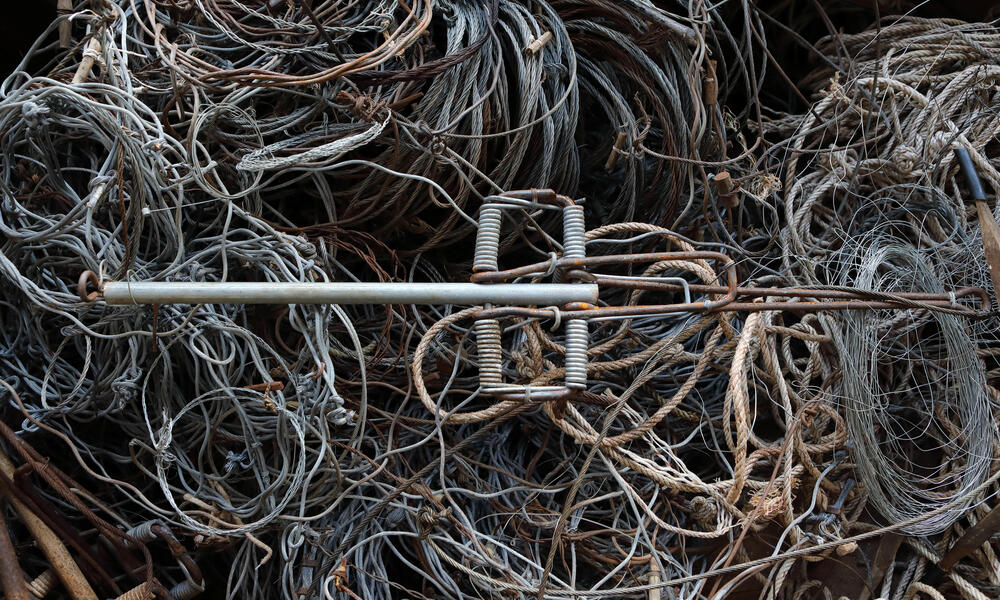 Ultimately, no single solution can end the snaring crisis. To address the root cause of the illegal wildlife trade, we need a multi-pronged approach by all stakeholders.

Firstly, all conservation strategies need to take a people-centered approach, whether it’s providing resources and incentives for local people to lead snare-reduction activities or raising awareness about the impacts of illegal wildlife trade. Involving Indigenous people and local communities in conservation efforts and natural resource governance is critical to long-term success.

Secondly, we must strengthen law enforcement surrounding wildlife protection and anti-snaring laws, whether that is by setting consistent definitions for snares and traps or by ensuring perpetrators are prosecuted. At the same time, targeted behavioral change campaigns can effectively reduce consumer demand for big cat parts and wildlife meat.

“I removed my first snare in China 30 years ago and today these deadly traps still remain the biggest threat to the survival of Asia’s big cats,” said Stuart Chapman, lead of WWF’s Tigers Alive Initiative. “We know what needs to be done, the solutions are effective and, if sustained, can lead to the rapid recovery of wildlife populations.”