Thanks to generous WWF supporters, bison now have over 22,000 new acres to roam in Badlands National Park 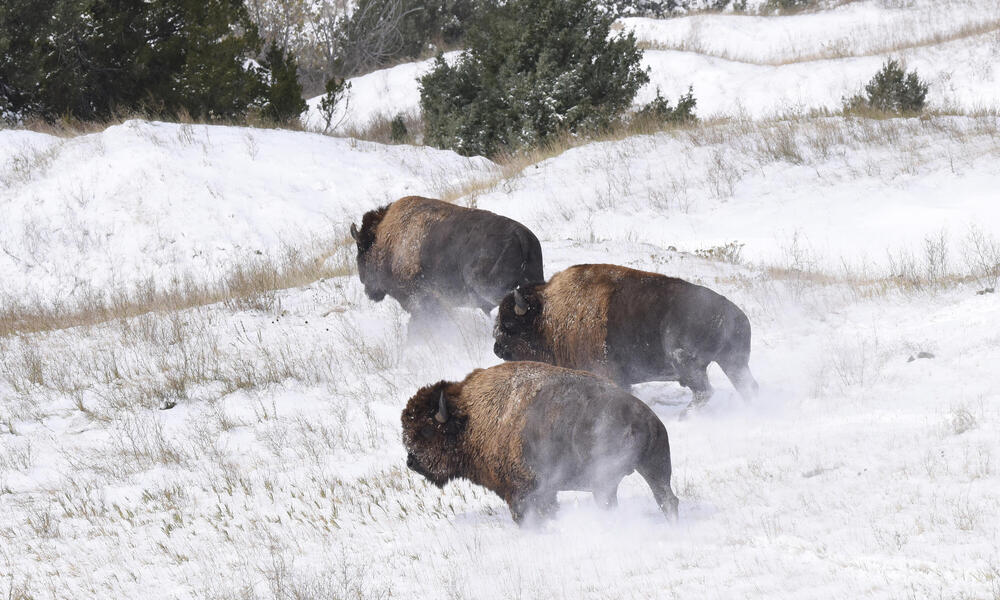 The door of the gooseneck trailer clanged open and for a moment, the only sound was a lacerating wind whipping snow across the plains and canyons of Badlands National Park. A slew of onlookers waited in hushed anticipation. And then—as though a signaling bell chimed—four massive, majestic bison barreled through the opening and into the wild.

This is the first time that bison have touched this land since 1877.

Bison in Badlands National Park now have an additional 22,553 acres to roam thanks to a passionate group of supporters who want to see America’s national mammal thrive.

“Bison are North America’s largest and most iconic mammal, and WWF is thrilled to be part of an effort to create the second largest herd in the National Park system,” said Martha Kauffman, managing director of WWF’s Northern Great Plains program. “The project has touched the imaginations of people across the US, and the matching dollars that WWF has provided wouldn’t have been possible without the generosity of our supporters.”

Over 2,500 WWF donors and those from partner organizations raised nearly $750,000 to build 45 miles of new fence that extends bison habitat in the park from 57,640 acres to 80,193 acres—an area more than one-and-a-half times the size of Manhattan Island. Almost 1,200 of these extraordinary animals live in this space.

Once numbering in the tens of millions, bison populations dwindled to only 512 plains bison by 1877 as westward expansion pressed on. Fortunately, forward-thinking conservationists managed to protect those remaining animals and bring them back up to the 21,000 we see roaming today.

In 2014, WWF supported a land swap in Badlands National Park that removed a parcel of private land inside the park’s boundaries that blocked expansion of the area in which bison could roam. Later, we provided comments supporting the park’s environmental assessment that proposed creating a larger space for them. And now that vision of native bison flourishing in a larger wild home has come to fruition

WWF is now working to establish five bison herds of at least 1,000 individuals each in the Northern Great Plains to increase the genetic health of this species. It is our hope that, in time, these herds will produce bison that can be shared with tribal communities and national parks in the years to come, helping our national mammal return to its home in the grasslands.

Learn more about bison in the Northern Great Plains.