What does a snow leopard researcher do? 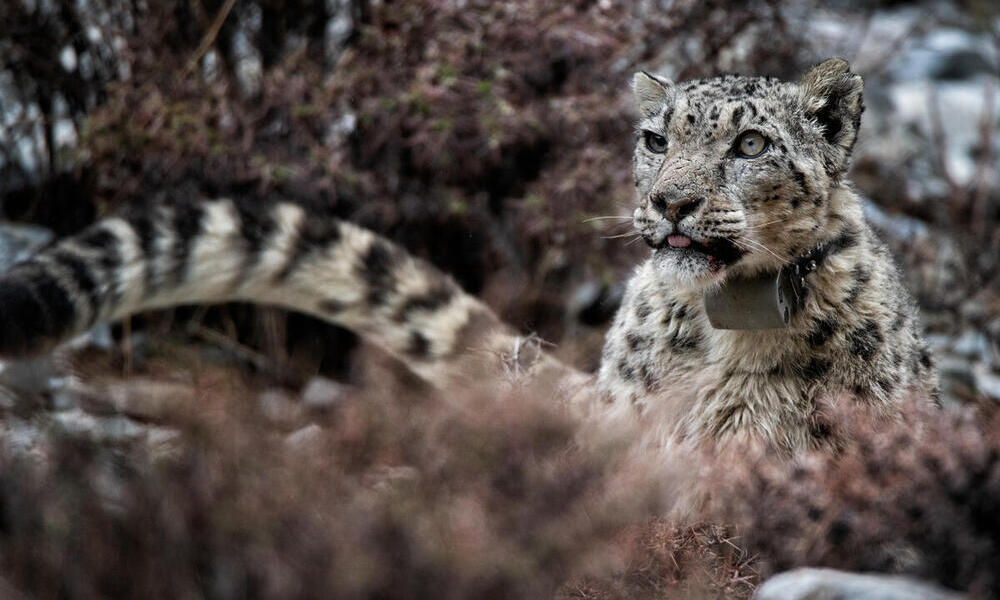 The mountains are calling and I must go

For as long as I can remember, I’ve had an affinity for the wild—a love affair, if you must. The mountains and their people have always felt like home, and mountain species are like precious treasures hidden in the crevices of colossal blocks of snow that are the Himalayas.

As a wildlife biologist, there’s nothing more exciting than to witness collaring one of the planet’s most iconic big cats—the snow leopard. Often referred to as Saabo by the locals of Dolpa, you could say that the snow leopard is the ‘underdog’ of the cat world, evolving to survive and adapt in one of the most unforgiving and rugged terrains that make up the Himalayas. But in its high mountain habitat, this cat reigns and is the top predator of the ecosystem.

I recently headed out to satellite collar snow leopards—my sixth excursion since 2013.

For most of my team, the telemetry expedition means never-ending logistics, but for a biologist, it also means hope. It means that humans acknowledge the role this predator plays in safeguarding the mountain ecosystem and that studies and research are being conducted to help it survive; perhaps even thrive.

After five successful collaring trips, you would imagine that I wouldn't be nervous, but each time I venture into an expedition I still feel the same jitters I did the first time. Twelve months of preparation, and multiple challenges later—official approvals, field planning and procurement of GPS collars ahead of time, all made more difficult by the second wave of COVID-19 that took our little Himalayan nation by storm—our team finally set off.

As the tiny plane went over a large hill, the clouds cleared up to give us a peek of heaven on Earth—Dolpa.

As we cross Jyangala, a mountain pass at 16,732 feet, we descend into the unique swampy shrublands of Saldang and finally towards our final destination and ground station—Nisal, a small, 38 household village

We camped on the foothills of the northern Himalayan ranges bordering Nepal and China.

I looked around myself, staring into the familiar dry, arid, and treeless Trans-Himalayan terrain, wondering how fast the treelines were shifting and wondered about the future. The climate crisis will inevitably shrink snow leopard habitats. Would the species be able to adapt to the warmer temperatures? Would it be chased out of its own habitat unable to compete with other big cats such as the common leopard, which would also move higher into the mountains as temperatures warm? Would there be a future where this enigmatic species survived?

Pulling myself together, I carried along with the trek.

The plan was to safely capture and collar a snow leopard across an area of 12,355 acres in sites concentrated along the northern cliffs of Dolpa, an area known for snow leopard mobility based on data from camera traps around the site. Data from these camera traps are useful in tracking recent activity and attributes of snow leopard movement in the area, such as the numbers present, and the ratio of males, females, and cubs.

Based on prior camera trap research we were aware of the likelihood of six snow leopard individuals within the area, indicating high density. However, merging camera trap research with local community knowledge on snow leopard whereabouts is what truly makes an expedition successful —which is precisely why I spend considerable amounts of time consulting with local citizen scientists and members of the local snow leopard conservation committees to identify potential trap sites.

The next few days are spent conducting special training for new citizen scientists of Saldang and frontline park staff of Shey Phoksundo National Park to build local capacity in safe capture protocols based on guidelines developed by the government for the expedition.

We also set up a communications tower to automatically monitor the traps and send us signals if triggered. 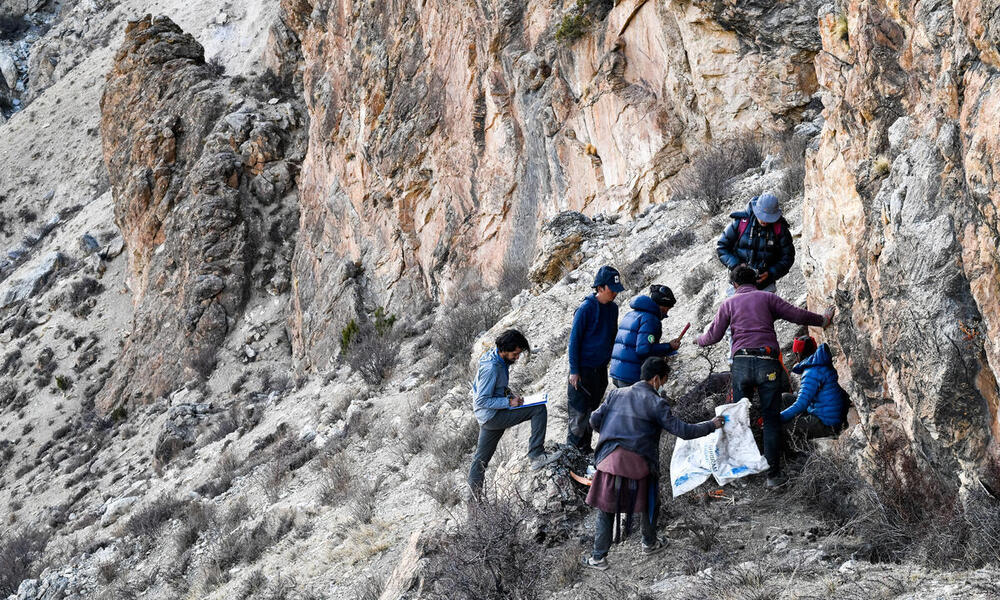 As rare as kryptonite

We divide teams into two groups to lay out camera traps in the area. There is never absolute certainty that a snow leopard will be captured during any of our missions. But we rely on probability, local knowledge, and a never-ending supply of optimism.

It takes us several hours of arduous trekking to reach each trap site; going uphill then downhill, and crossing rivers as we continually gasp for breath in the thin air. In every site we visit, the search for signs of life is one of the most exciting parts of the job. We’re constantly on the lookout for pugmarks in sandy sites, scrape marks on stones, or even a strong urine odor—all indications of snow leopard presence.

Unlike previous expeditions, there’s no time for boredom or impatience to creep in. It’s 6 a.m. with the sun still hiding behind the mountains and the day yet to begin when a camera trap alarm is triggered in the Rapka region—merely two days after setting them up. As we often receive false alarms, a couple of our local citizen scientists and park staff proceed to check on the trap status before the telemetry team sets out. Meanwhile, back at the camp we eagerly await word from the first team to make contact.

At 6:45 a.m. we get a signal on the walkie-talkie. Much to our surprise, it isn’t a false alarm. The happiness within the group is infectious and there are plenty of high fives and hugs going around. Within a short time, we reached the site to join the first team. A highly trained veterinarian safely tranquilizes the snow leopard.

We immediately and gently haul the snow leopard into a stretcher and to a safer site. This part of the collaring always leaves the biggest impact on me. Touching this iconic species with my gloved hands always feels unreal. I carefully place a GPS collar on its neck, while the veterinarian checks its vitals and measurements. He’s a healthy 7-year-old male snow leopard, weighing 81.5 pounds. He’s a marvelous big cat, and as I look closer, he seems almost magical to me.

After the collar is placed, the veterinarian administers an antidote and the animal slowly awakens. We allow it to make a swift exit and travel safely to its habitat. Having accomplished our goal, we wrapped up the expedition and returned to Kathmandu. 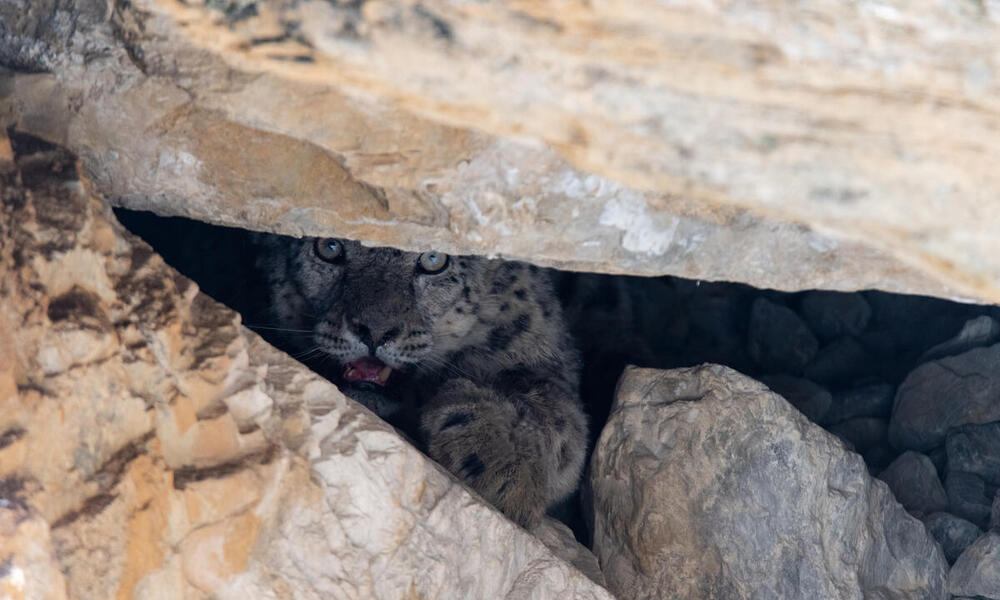 The science is telling

All in all, we collared two snow leopards during this successful trip. Back in my office in Kathmandu, I monitor the collared snow leopard’s movement with great interest and anticipation. The weekly radio monitoring by citizen scientists in Saldang keeps me connected to the issues on the ground as we monitor the snow leopard’s movements, terrain use, and kill patterns—a process which is vital to develop strong and effective conservation plans and activities on the ground.

Due to the untimely death of a previously collared snow leopard resulting from human-wildlife conflict, this expedition had a more focused approach in terms of addressing these interactions.

We’d understand the underlying challenges of human-wildlife conflict in the region—primarily retaliatory killings resulting from mass killings of livestock. As such, we’d put in place measures to minimize conflicts such as supporting the construction of predator-proof corrals to deter livestock killings by snow leopards, Livestock Insurance Schemes to compensate for any losses incurred, as well as various community awareness programs.

Despite focused and strategic conservation efforts by the Government of Nepal, national parks, local communities, and conservation partners, threats to snow leopards still persist with reported cases of retaliatory killings in and around the region. As such, this issue clearly calls for national and global attention to snow leopard conservation. We must continue working closely with communities to manage prevailing conflict, improve protection measures, increase awareness, and enhance community stewardship and benefit programs to ensure the long-term survival of the species.