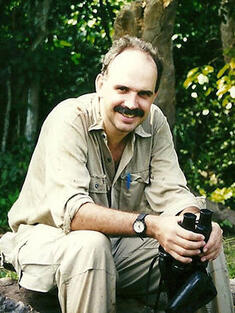 Allard Blom leads WWF’s initiatives in Africa’s Congo Basin, where he has extensive experience working with local communities. As managing director for the Congo Basin, he provides technical support for programs and helps maintain donor relations. In addition, he raises funds and collaborates with partners and stakeholders to conserve nature and manage protected areas and associated landscapes. He also oversees a project to counter corruption in natural resource management in Madagascar and provides technical support related to landscape and protected area management and wildlife management issues in general.

Before moving to WWF’s Washington, DC, headquarters in January 2004, Allard spent more than 16 years in Africa. He started in Gabon, where he studied buffalo as part of his master’s thesis and then conducted an elephant and great ape survey with the Wildlife Conservation Society. He went on to lead extensive wildlife surveys in several other countries, including the Democratic Republic of the Congo (DRC), Kenya, Equatorial Guinea, Ivory Coast, and Tanzania. In 1990, he joined WWF International in the Ituri Forest in the DRC, where he played an instrumental role in establishing the Okapi Wildlife Reserve, which was designated a UNESCO World Heritage site in 1996.

In 1993, he transferred to WWF-US to manage its program in Dzanga-Sangha—now a UNESCO World Heritage site in the Central African Republic (CAR)—and serve as WWF’s country director for CAR. While there, he initiated a long-term sustainable funding strategy. It included a trinational conservation trust fund and a successful gorilla habituation program where tourists can visit the elusive western lowland gorillas in their natural habitat accompanied by local Ba’Aka people. Allard continues to be involved in Dzanga-Sangha, working to establish a foundation to manage this unique protected area.

After leaving CAR at the end of 1999, he finished his PhD thesis on the socioeconomic and ecological impact of gorilla-based tourism in Dzanga-Sangha and served as a landscape ecologist consultant for WWF and adjunct professor at the State University of New York at Stony Brook. In early 2001, he joined a European Union regional conservation initiative to help establish the Lopé National Park in Gabon. After completing that project, he returned to WWF-US, this time in Washington, DC.

Allard holds a BS and MS in biology and ecology and a PhD in production ecology and resource conservation management from Wageningen University in the Netherlands.