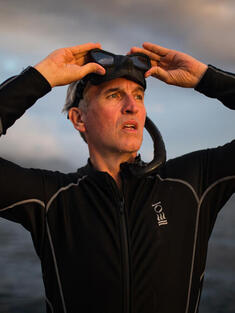 BRIAN SKERRY is a photojournalist and film producer specializing in marine wildlife and underwater environments. Since 1998, he has been a contributing photographer for National Geographic Magazine, covering stories on every continent and in nearly every ocean habitat. In 2014, he was named as a National Geographic Society Photography Fellow, and then named a National Geographic Society Storytelling Fellow in 2017. In 2017, he was also awarded the title of Rolex National Geographic Explorer of the Year. Skerry is the author of 12 books including the acclaimed monographs Ocean Soul and SHARK. His latest book, Secrets of the Whales, was released in April 2021 by National Geographic as part of a multiplatform project he created that includes a cover story in the May 2021 issue of National Geographic Magazine and a four-part documentary film series streaming on Disney +. He is an 11-time award winner in the prestigious Wildlife Photographer of the Year Competition. In 2010, National Geographic Magazine named one of Skerry’s images among their 50 Greatest Photographs of All Time. The Academy of Underwater Arts and Sciences awarded Skerry the 2019 NOGI Award for Arts, an award frequently referred to as the “Underwater Oscar.” Skerry has had numerous solo photographer exhibits including Portraits of Planet Ocean, a two-year exhibit at the Smithsonian National Museum of Natural History in Washington, DC, and two separate exhibits, Ocean Soul and Secrets of the Whales, at Visa pour l’Image in Perpignan, France. Other exhibits of his work have been held in cities worldwide, including Geneva, Barcelona, Lisbon, and Shanghai. He frequently lectures on ocean exploration, storytelling, and conservation, having presented at venues such as the United Nations General Assembly, the World Economic Forum in Davos, Switzerland, TED Talks, the National Press Club in Washington, DC, the Royal Geographical Society in London, and the Sydney Opera House in Australia.