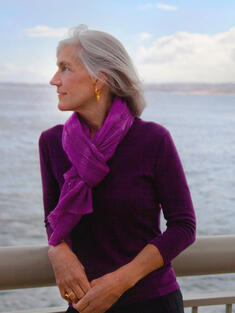 JULIE PACKARD is founding executive director of the Monterey Bay Aquarium. Her commitment to advancing ocean conservation has been demonstrated through the aquarium and far beyond. Along with her role leading the Aquarium, Packard chairs the board of the independent Monterey Bay Aquarium Research Institute, serves on the board of the David and Lucile Packard Foundation, and is a former trustee of several conservation organizations including World Wildlife Fund and The California Nature Conservancy. She also served as a member of the Pew Oceans Commission, which published a blueprint for improving governance of America’s ocean waters in 2004; as well at the California Parks Forward Commission, an independent commission charged with developing a sustainable path for California’s state parks. Packard resides in the hills above Monterey Bay and enjoys spending time with her twin daughters, her commercial apple orchard, and her chickens. When not working to advance conservation, you’ll find her outdoors in California’s mountains and coastlines— on, in, or near the water as much as possible.