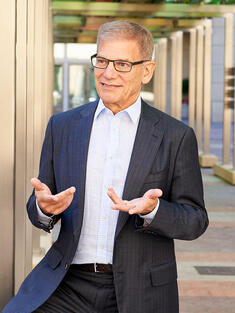 ROBERT LITTERMAN is a founding partner of Kepos Capital; a New York City based systematic global macro firm, and the Chairman of the Kepos Capital Risk Committee. Prior to joining Kepos Capital in 2010, Dr. Litterman enjoyed a 23-year career at Goldman Sachs & Co., where he served in research, risk management, investments and thought leadership roles. He oversaw the Quantitative Investment Strategies Group in the Asset Management division. While at Goldman, Dr. Litterman also spent six years as one of three external advisors to Singapore's Government Investment Corporation (GIC). Dr. Litterman was named a partner of Goldman Sachs in 1994 and became head of the firm-wide risk function; prior to that role, he was co-head of the Fixed Income Research and Model Development Group with Fischer Black. During his tenure at Goldman, Dr. Litterman researched and published a number of ground breaking papers in asset allocation and risk management. He is the co-developer of the Black-Litterman Global Asset Allocation Model, a key tool in investment management, and has co-authored books including The Practice of Risk Management and Modern Investment Management: An Equilibrium Approach (Wiley & Co.). Dr. Litterman earned a Ph.D. in Economics from the University of Minnesota and a B.S. in Human Biology from Stanford University. He was inducted into Risk Magazine's Risk Management Hall of Fame and named the 2013 Risk Manager of the Year by the Global Association of Risk Professionals. In 2012, he was the inaugural recipient of the S. Donald Sussman Fellowship at MIT's Sloan School of Management. In 2008, Mr. Litterman received the Nicholas Molodovsky Award from the CFA Institute Board as well as the International Association of Financial Engineers/SunGard Financial Engineer of the Year Award. Mr. Litterman serves on a number of boards, including Commonfund, where he was elected Chair in 2014, the Niskanen Center, Resources for the Future, Robert Wood Johnson Foundation, Ceres, World Wildlife Fund, the Sloan Foundation, the Woodwell Climate Research Center, and the Climate Leadership Council, where he serves as co-chair of the Board. Dr. Litterman also chaired the CFTC Climate-Related Market Risk Subcommittee, which published its report, “Managing Climate Risk in the U.S. Financial System,” in September 2020.