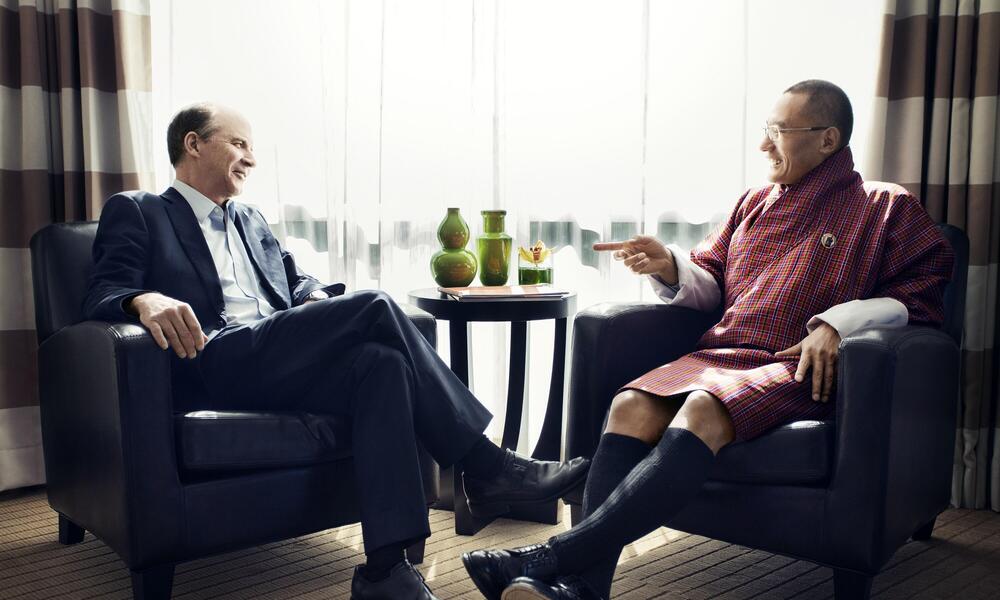 On March 18, 2015, WWF President and CEO Carter Roberts sat down with His Excellency Tshering Tobgay, the prime minister of Bhutan, to talk about the importance of being connected to nature, the ingredients of a good night's sleep, and what can be accomplished with a little help from your friends.

“Put very simply, we grew up with nature. There were so few of us when I was growing up—maybe 650,000 registered Bhutanese—and we lived in villages, scattered across the country. So we are all connected with nature—we love it we care for it, we want to protect it. It is a part of ourselves.”

CARTER ROBERTS When you speak of your country, you talk a lot about the enabling conditions that make Bhutan so unique—conditions like the gross national happiness index, engaged leadership and a constitution that protects conservation as a core value. No other country in the world has this combination of formal structures in place. But beyond all that, from the most personal point of view, why is nature so important to the people of Bhutan?

PRIME MINISTER TOBGAY Put very simply, we grew up with nature. There were so few of us when I was growing up—maybe 650,000 registered Bhutanese—and we lived in villages, scattered across the country. So we are all connected with nature—we love it, we care for it, we want to protect it. It is a part of ourselves.

My earliest memories of interacting with nature are on my family's farm. My father's side had a nomadic farm, and they would take our cattle from the very high mountain passes in the summer to the lowlands in the winter.

And I remember growing up and sleeping in our house that was about 25 feet long, and divided right down the middle. Half was for our cows, all tethered to the fence in the center, and the other half was for us. So that was my earliest impression—growing up with calves and cows and in nature.

CR Sounds like the makings of a very rambunctious evening.

PM The cows are rustling, but so are we—because we're sleeping on a blanket of leaves. And we'd always have our dogs with us. At night, sometimes, if they heard a fox or jackal or a wild dog, they would go crazy and really start barking.

CR So you're used to not getting a good night's sleep.

PM On the contrary—all those sounds were the ingredients to a good night's sleep!

CR Of course! We all have different familiar sounds of home. Bhutan is often held out as an example of how to fully integrate conservation into the heart and soul of a country. Of course we're all inspired by different examples. When you think about the environment and conversation—that mission, that calling—is there someone you look to who you might describe as a hero?

PM He could have made the whole country into a desert, and with really good intention—to develop the people, to develop our economy. But he didn't. He took the hard way, the path less traveled. And he worked very hard to keep our culture, and our environment, not just intact but pristine.

And we did that without accepting any recognition. He did it for the country—for the people—and not for himself. People have tried to acknowledge him as a champion of the Earth and induct him into an environmental hall of fame. He is absolutely not interested. That makes him even larger than life, to me. Because it's not about him—it's about the environment.

CR And then he abdicated when he was how old—52? That's an age where a lot of rulers are just getting started.

PM That's right, 52. But remember he was only 17 when his reign began. At the time of his coronation he was the youngest monarch in the world.

CR So tell me about Bhutan for Life.

PM I'm very optimistic about the future of conservation in Bhutan. I believe our politicians and democratic leaders, myself included, have the good sense to continue our wise conservation policies—policies that are sometimes expensive, that sometimes must be chosen over some immediate economic gains.

And though we are committed, the problem is that we have new challenges to face also. We have open borders with our neighbors and that brings the dangers of poaching. We have a large young population growing increasingly restless, and we have unemployment to consider. There is an urgency to develop economically, and some of the urgency may spill over into taking quick decisions which are not very good for the environment.

CR The challenges of a modern world.

And we we've partnered with World Wildlife Fund to put together Bhutan for Life, a financing mechanism for the conservation of our protected areas based on the principles of Wall Street project financing. Bhutan for Life will involve multiple investors, and a single closing. The money raised will fund, for a transition period, accelerated activities to conserve parks. I say transition period because the government will have a prescribed amount of time to come up with its own funds above and beyond what we are investing now.

Following this model, and with help from our friends at WWF and other important partners, we know we will be able to do everything by ourselves at an identified point in the future. And that will be as it should be, and it will bring tremendous pride to the people of Bhutan.

CR Right, that's it. The idea of looking at a problem square in the eye: asking what does it take for these parks to flourish over the long term—and then putting together the financing package to make it so—really appeals to people.

One last question: If I asked your childhood teachers what your best quality or special talent was—what would they say?

PM They probably wouldn't remember me.

PM Well, teachers are wonderful and they love their children, and I went to a superb school, but I was very quiet—especially as a child.

PM Well, that's who I am. So it's strange that I'm now in politics. I grew up as a very private person and I still see myself as very private. At school, I was not heard, I hardly did anything that was outside the rules.

CR But at some point things changed. When did you come out of your shell?

PM When I was in grade 10, I was cast in a play and really enjoyed it. And I remember I got the biggest compliment because our principal, who we thought was larger than life, apparently remarked to some of my classmates, "Had we known he was this able we would have included him in our staff play." And the staff play was...

CR That was big.

PM It was big. So that marked the beginning for me—I wasn't going to be a shy person anymore.

CR Well, we're thrilled to have you as our partner in Bhutan for Life. Thanks for sitting down with me today.

PM It was my pleasure. Thank you.

Find out more about how Bhutan's prime minister is saving forests at home.