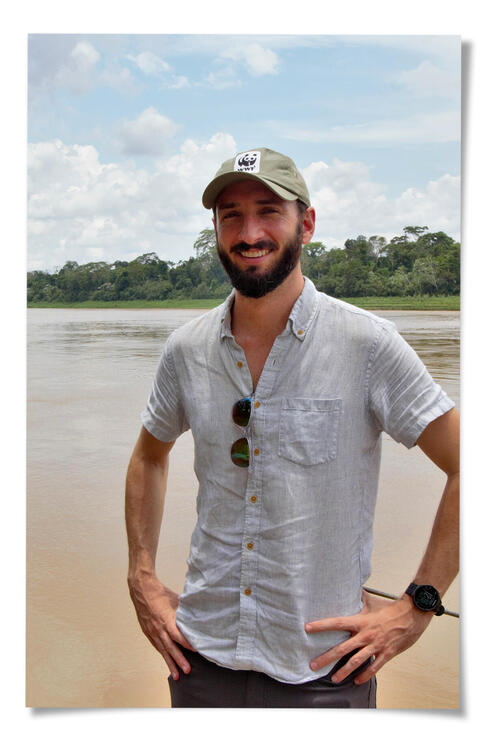 Ryan Bartlett works with governments and the private sector to better understand and plan for the impacts of a changing climate, focusing on the solutions that nature provides for building resilience.

I grew up in the American West, in northern Nevada. I didn’t realize it at the time, but my entire childhood in the ’90s took place in drought conditions. The threat of fire was ever-present in the summer. My family once had to evacuate when a brush fire got dangerously close to our home. Still, as a kid, I had yet to connect the persistent dryness of the area to the larger climate crisis.

That changed when I got to college. When I took environmental policy classes there, I also began to understand the injustices at the heart of a lot of natural resource management. One class on international water policy really struck a chord—it focused on how corporations were privatizing resources, profiting from what should have been freely available to local communities.

Like any 20-year-old in college, I was ticked off. The social justice aspect of climate change sank in even further in grad school, where I studied environmental management. I spent a summer in Nepal researching the ability of local communities to respond to profound changes in climate. As with so many places in the world, the people there were suffering the worst consequences, even though their contribution to emissions was negligible.

Seeing up close just how little capacity those isolated farmers had to deal with new weather extremes left a profound impression. Figuring out how to plan for and respond to the impacts of climate change around the world has been central to my work at WWF since day one. Early on, I focused on training and capacity building, working to translate climate science—often technical and overcomplicated—into something that’s a little easier for people to use. In turn, I apply lessons from that work to using science to influence policy at local, national, and global levels.

Currently, a lot of my focus is on changing how infrastructure is planned and developed in the context of a worsening climate and increasing nature loss. For example, when a road is being planned between two points, not only is the intact habitat along the roadway disrupted, but the surrounding areas can become deforested and eventually urbanized or converted to agriculture. I look at infrastructure planning through a more holistic lens—one that takes into account the benefits these ecosystems provide for people.

“I work on demonstrating the value of ecosystems for the well-being of both humans and biodiversity in a rapidly warming world.”

While the benefits of developing hard infrastructure are easy to understand—providing services like piped water, or electricity, or a shorter commute on new roads—the equally important role of nature in providing services is not nearly as well understood, especially by decision-makers planning new infrastructure. So I work with scientists to map out the value of intact ecosystems, both for human well-being in the face of worsening hazards like floods and droughts and for the protection of biodiversity.

For example, we assess how good the forests are at keeping the soil stable, so it doesn’t run off downstream and worsen water quality or increase the risk of landslides. It’s often a matter of quantifying value—whether it’s by the number of people who benefit from living in a healthy watershed or the monetary savings of keeping ecosystems intact instead of wiping them out for infrastructure or agriculture.

Climate and ecosystem data must be interpreted in a way that resonates with people. The key, I’ve learned, is to simplify and specify as much as possible. Talking about 10% more rain in 2040 sounds abstract. But delving into the number of extreme rainfall days and the amount of flooding that rainfall will cause in a place is more tangible—especially if you can relate it to what people are already seeing.

Right now, there’s a huge need for people who can talk about climate change in ways that enable people to take action. Unfortunately, because of the emissions trajectory we’ve been on for decades, a lot of the change we thought we might avoid is now inevitable. So I have way more job security than I should. But I think that if you’re able to process and accept that inevitability, you clear the way to build urgently needed solutions today that actually create strength so the next extreme event isn’t as damaging, especially in vulnerable communities that rely on nature. There’s a lot of power and hope in resilience.