In a landscape largely undocumented by science, a researcher and a photographer team up to illuminate more than the night

Lise Hanssen walks along the Kwando River near her camp as Timmy, her lanky, adopted village dog, bounds ahead. “He’s our early warning system for approaching wildlife,” she jokes as he barks into the trees. “Out here, we hear lions, hyena, and other animals all the time.”

Hanssen is leader and sole employee of the Kwando Carnivore Project. She shares the camp with Timmy and her husband Paul Funston, who leads lion and cheetah programs for big-cat conservation group Panthera. The camp is a cozy clump of tents and reed structures at the edge of the Kwando River on Mudumu Conservancy land in Namibia’s far eastern Zambezi region, within the vast Kavango Zambezi Transfrontier Conservation Area (KAZA). The family uses well water and a generator for power, and is linked to the broader world via satellite, cellphones, and a sandy, rutted road.

As part of a team effort to understand and protect wildlife in Namibia’s Zambezi region, we captured thousands of images, including (in the order pictured below): a female lion, giraffes and elands at a watering hole, a leopard, two elephants, a serval, a gathering of bush pigs, a racing hyena, and a porcupine. 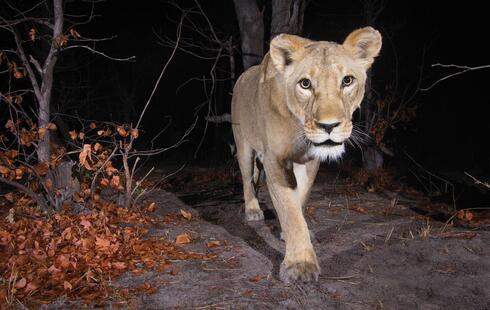 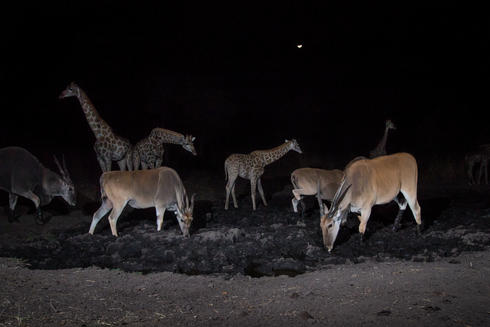 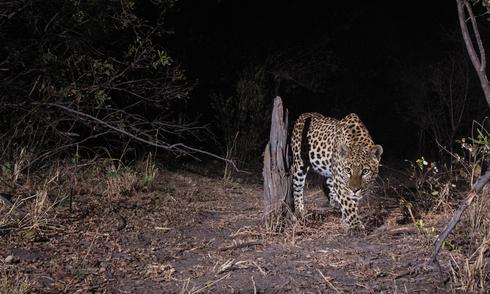 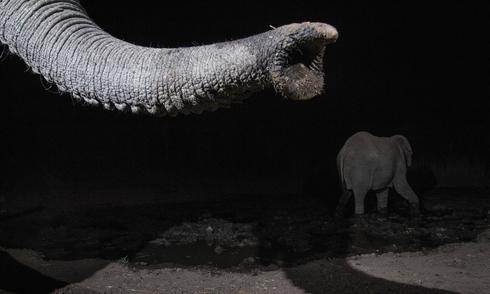 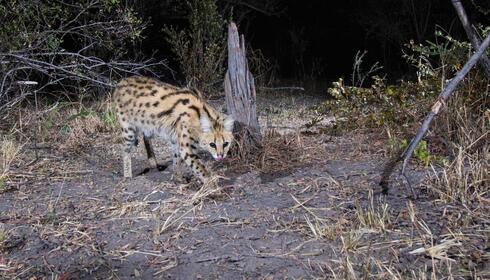 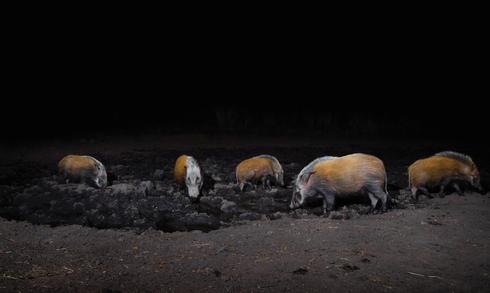 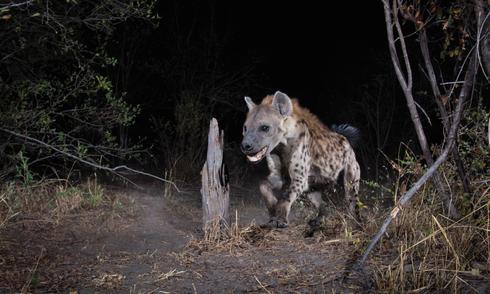 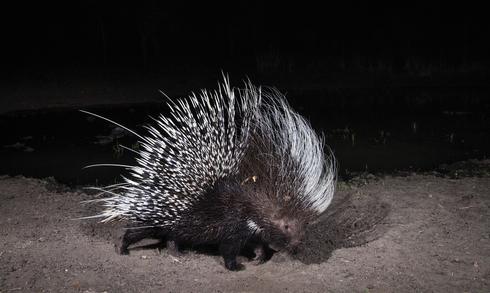 Hanssen originally came to the Zambezi region to conduct a camera-trap study of spotted hyenas. That initial research expanded scientific knowledge of hyena activities and proved they were crossing into neighboring countries; it also produced photo documentation of a much greater abundance and diversity of wildlife in the area than had been recorded previously. Blurry nighttime images, taken with motion-tripped infrared camera-traps, revealed African wild dogs, leopards, African wild cat, banded mongoose, serval, caracals, bats, and both common and rare antelope species like eland, kudu, roan, sable, and tsessebe. “We also saw owls,” she adds, “and if we see owls we know the population of smaller mammals—their prey—is healthy as well.”

That data, in the context of human land uses in the area—settlements, farming, livestock grazing, harvesting of wild plants and animals—led to her current mission: to document and conserve the diversity of Zambezi wildlife and to find ways for people and wildlife to live together harmoniously.

To collect the new data, Hanssen and her research partners mounted almost 180 camera traps to trees, positioned on opposite sides of roads or tracks within the forest, in a grid of 1.5-square-mile areas covering about 775 square miles. “Camera trap images are a preferred method for developing a baseline population survey of large carnivores,” Hanssen explains, “because the cameras don’t interfere with the animals, which can carry on doing their natural day-to-day activities.” For a two-month period, each camera recorded every animal that tripped its sensors, and sent the GPS-tagged image files to the satellite dish at Hanssen’s camp.

From the first round of this project, she received more than 220,000 photos, which she winnowed down by eliminating people, vehicles, livestock, and other non-carnivore images. Hanssen sorted, tagged, and recorded every image by species (leopard, hyena, lion, etc.), and then individual animal (lion #1, lion #2). This meticulous work yielded both data and tools for further research. For example, after several months she had assembled 205 leopard images—excellent tools for identifying individuals, since each leopard has a unique pattern of spots. “In a perfect world,” she laughs, “I’d have an army of volunteers to help!”

Hanssen’s goal is to repeat the full survey every two to three years, and to train more community guards and local nonprofits like IRDNC to do the job and make more informed decisions about managing the conservancy’s wildlife.

As a research tool, these images provided the first baseline numbers for leopard populations, information for the long-term monitoring of spotted hyenas, and insight into the pride structure of the lions on Mudumu Conservancy and in Mudumu National Park. As an unexpected but important bonus, the photos also documented how people are using the land, whether for grazing, foraging, farming, hunting, or even poaching.

But what Hanssen hadn’t captured—yet—were the sort of eye-opening images that would grab the public’s imagination and make them care about the Zambezi region and the whole of KAZA. And that public engagement is so important: The state forest complex where Hanssen’s study is centered is protected in name only. It is also square in the sights of a proposed 25,000-acre tobacco plantation. So without public support for a more defined conservation status, a huge swath of the forest could soon be stripped to sow a single crop.

Not surprisingly, her sense of urgency is palpable. Hanssen is always racing: racing to set camera traps or collect, catalog, and analyze the images; racing, with Funston, to train game guards to improve the lion-proofing of their community’s livestock corrals; racing to respond when a wildlife tracker calls to say he’s identified a previously unknown African wild dog den; racing, she says, to get persuasive data and influential images into the hands of the government, tribal authorities, and others who can direct the fate of this land.

That’s where WWF and photographer Will Burrard-Lucas came in. Burrard-Lucas has made his name not only for photographing wildlife, but also for how he gets the photos. The inventor of the BeetleCam and other remote-controlled camera mounts, he’s become known for finding nonintrusive ways to get surprisingly up-close images of elusive wildlife.

In July 2015, Hanssen and Burrard-Lucas teamed up to capture images that would not only supplement Hanssen’s ongoing work, but also amaze people and inspire them to get behind much-needed conservation actions. And since the Zambezi’s predators are primarily nocturnal, the best images were captured at night.

In particular, Burrard-Lucas hopes that people take note of Hanssen’s research and “take action to protect the ranges of these animals.” Personally, he adds, “the highlight came when we managed to capture images of lions that had strayed into community areas. These are rare pictures! They should really make people want to help protect the area, and keep finding ways for lions—and other wildlife—to thrive where so many people live.”

The skittish nature of animals not yet inured to tourism is both a blessing and a challenge, Hanssen explains: “People may not understand the importance of this little corner of the world yet, but the Zambezi region can either be the heart of KAZA or the arrow through the heart. Truly—it’s almost shaped like an arrow, and is intensely settled with people and livestock, and runs right through the middle of many wildlife corridors that cross multiple countries. Here, we are sitting with wildlife and people living together all around. Animals here are a shared resource, so we need to share our efforts to protect them.”

“Now that we know what’s here,” Hanssen adds, “we know what there is to lose. Documenting the wealth of wildlife makes a strong argument for protecting it, and backing up that data with Will’s powerful photos might just win the day.”

Learn more about Will Burrard-Lucas' work with camera traps.

Explore more of this issue's coverage of KAZA: