Walrus habitat on the edge

Communities rally to protect the walrus resting on their shores

In what has become the new normal over the past 10 years, residents of the Inupiat village of Point Lay on the coast of the Chukchi Sea in Alaska have had new neighbors each fall. Tens of thousands of walrus, primarily females and calves, have gathered on beaches near the village. “In 2009, there were 50,000 animals at Point Lay,” remembers US Fish and Wildlife biologist Joel Garlich-Miller. “The haulout expanded for several miles along the beach.”

As the climate changes, walrus habitat is rapidly changing, too. Traditionally, female walrus and their young spend the summer on floating sea ice, resting on ice between dives to feed on clams, snails, and marine worms in the offshore shallow waters of the Chukchi Sea. But as summer sea ice moves north to waters too deep for the animals to feed in, walrus abandon the ice and come ashore. The haulouts were first observed in 2007, and coincided with a record sea ice melt in the Arctic. Over the past decade, the number of walrus hauling out along the Chukchi Sea has increased dramatically, both in Alaska and Russia.

As walrus pack tightly onto beaches, any disturbance—the sound of an aircraft or the scent of a bear—can cause a deadly stampede, and several thousand have perished along the Russian coast. Young animals in particular are vulnerable to trampling injuries and death. In Icy Cape, Alaska, disturbances to a walrus haulout in 2009 led to about 150 walrus deaths. 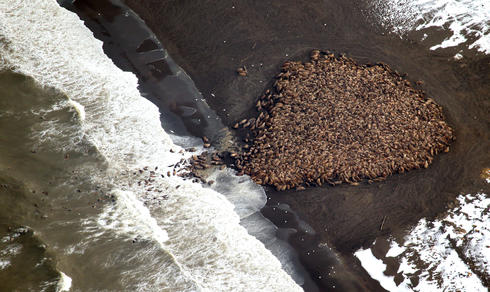 Scientists are wondering about the long-term impacts of sea ice loss on the population. Chad Jay, a marine and wildlife biologist with the US Geological Survey, has tracked how much time walrus spend swimming, feeding, and resting, and how these patterns change depending on whether the animals haul out on land or on ice. His research team found that when the animals are on sea ice, especially in food-rich areas such as the Hanna Shoal in the northeast Chukchi Sea, they have everything they need in one place. The walrus can spend most of their time either in the water foraging or hauled out, at rest. “That’s the best situation for them,” Jay says. “When only land is available for resting, they spend more time in the water, not foraging, and not at ease.”

When on land, the animals are also farther away from their best food sources and may make long commutes to their feeding grounds. In 2011, Jay discovered that half of the animals he tagged made round trips of about 250 miles between Point Lay and the southern part of Hanna Shoal. “It would be a hardship for a calf to have to make that kind of journey,” says Jay. Walrus have the lowest rate of reproduction of any pinniped species, with mothers investing considerable care in their young.

In 2011, the federal government listed the Pacific walrus as a candidate for protection under the Endangered Species Act, because of concerns over the changing sea ice habitat, as well as other threats like increased shipping, changes in prey, and diseases. “With all the changes in the Arctic, it’s an uncertain future for walrus,” says Garlich-Miller.

The US Fish and Wildlife Service is currently reviewing the species’ status, and should reach a decision this year.

The walrus’s future also significantly impacts Alaska Native hunters, who depend on the animals to feed their families. In 2013 and 2015, the state of Alaska declared a walrus harvest disaster for the communities of Wales, Gambell, Savoonga, and the island of Little Diomede. Unusual weather patterns and difficult ice conditions prevented hunters from accessing the walrus as they migrated past the communities, resulting in a record-low harvest and food shortages. “Mitigating the negative impacts of climate change on walrus is critical,” says Vera Metcalf, executive director of the Eskimo Walrus Commission, the Alaska Native comanagement entity representing 19 walrus-hunting communities.

Point Lay is actively working to protect walrus from disturbances. When the animals arrive, the community works with air carriers to change flight routes and with the fishing community to minimize traffic near the haulout site. Residents monitor the walrus, report incidents of disturbances, and make sure that visitors and hunters stay away from the animals. The Eskimo Walrus Commission supports these efforts and passed a resolution in 2008 to minimize disturbance of hauled-out walrus, urging communities to protect walrus while they rest on land. “We hope that these animals that we rely on remain healthy, so our communities and people stay healthy,” says Metcalf. “We share this environment, and we either prosper or struggle as our natural resources do.” 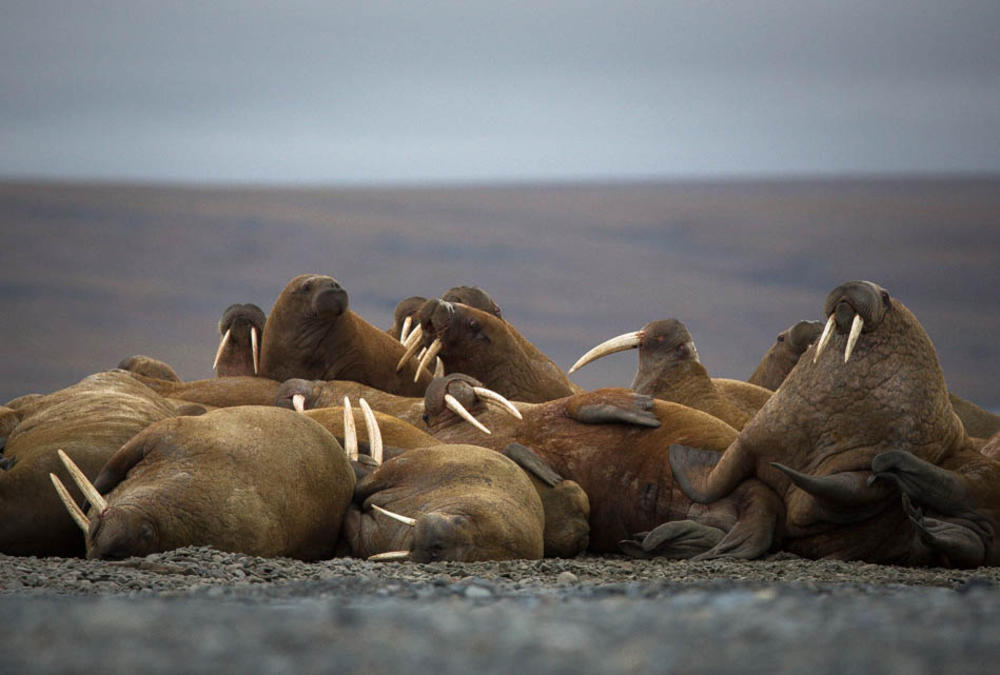 Explore more of this issue's coverage of The Arctic: