Where did your can of tuna come from?

Tuna are the jet-setters of the oceans. With muscular, streamlined bodies designed for speed—they can swim up to 43 miles per hour—some of these fish can migrate thousands of miles across the Atlantic and Pacific oceans to feed and reproduce. As one of the world's most popular seafoods, tuna travel equally impressive distances from the fishing boats that catch them to our grocery stores and restaurants. Have any idea where your most recent can came from? Here's one common route—and how WWF is working to make it sustainable. 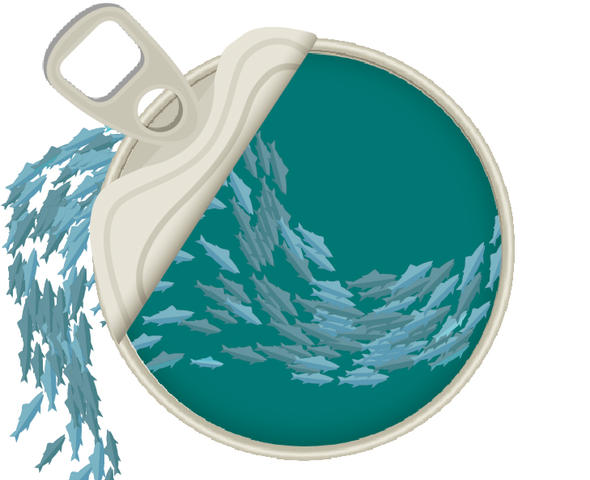 Skipjack—the smallest, most common species of tuna—travel in large schools through the Western Central Pacific Ocean.

Most skipjack is caught by purse seine fishing: A ship unfurls a cylindrical net around a school of fish, closes the net from the bottom, and pulls it to the surface.

The fishing vessel carries its tuna catch to a port at Kiribati, where it transfers the catch to a larger, refrigerated carrier vessel.

The carrier vessel transports the catch to Thailand, one of the world's biggest tuna processing countries (Thailand exports 40% of the world's canned tuna supply).

While much of the tuna flowing into Thailand gets canned there, US-bound tuna tends to be converted from frozen fish to loins (the meat used in canned tuna), refrozen, and packed into another carrier ship.

The frozen loins then travel from Bangkok to a cannery in the US. There, the meat is divided into cans, which are then sealed, cooked, cooled, labeled, and checked for quality. In 2015, the US imported more than 115,000 tons of tuna (worth $540 million) from Thailand).

The finished product—canned light meat tuna—is trucked to a distribution center in Southern California. From there, it's sent to grocery stores across the US.

WWF is working along multiple steps of the tuna supply chain to make it more sustainable. In 2008, we helped launch the International Seafood Sustainability Foundation to improve the tuna fisheries management process through advocacy and voluntary implementation of best practices. We're also working with purse seine fleets engaging in fishery improvement projects in the Pacific, Indian, and Atlantic Oceans; supporting the creation of sustainable tuna fisheries that benefit local communities and use new technology to improve monitoring practices; and helping major seafood buyers understand the importance of sourcing their fish from fisheries that have sustainability certification through the Marine Stewardship Council.