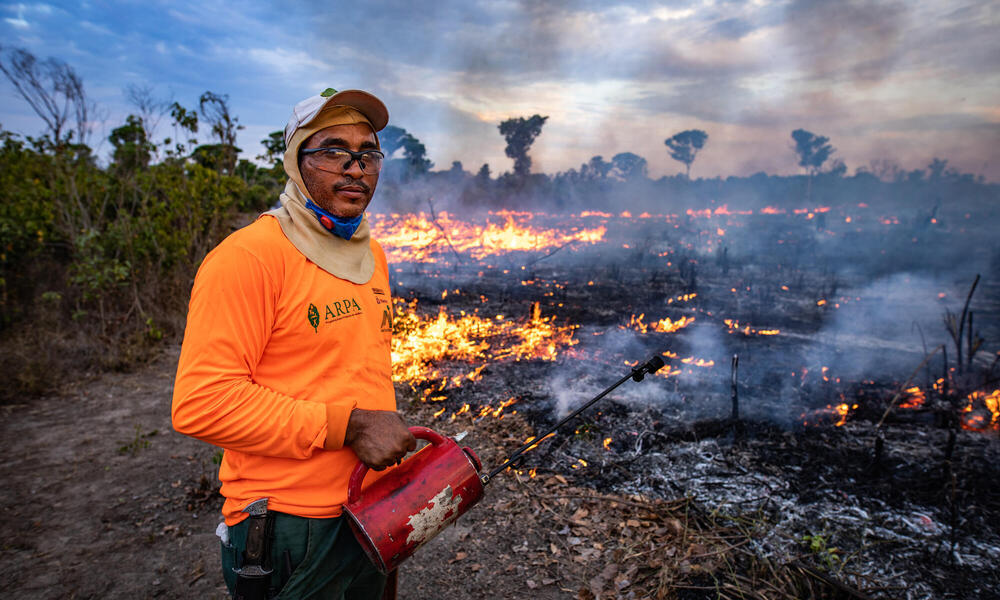 The flames start out small and barely audible, their soft flicker soothing to the eye. But within 15 minutes they are two stories high—a roaring, terrifying wall. They race across an eight-acre tract of bone-dry tall grasses and bushes, cranking up the air temperature from an already feverish 90 degrees to an unbearable temperature well over 100.

Jose Luis Neris da Silva is in the thick of it, clad in goggles, heavy gloves, and a ski mask-like hat that covers his neck and head. He started the fire. And his job is to make sure it doesn’t burn out of control.

Jose is a member of the Cantão State Park fire brigade. Part of his job is to start fires—called controlled burns—which quickly clear small tracts of land so the 80 or so families who live in the park can plant corn, beans, and other vegetables and fruits to feed themselves. They cannot afford the tools that are needed to clear the tall grasses that grow behind their homes during the rainy season. They need to resort to flames, but few of them know how to do so without accidentally burning trees and plants they did not intend to burn. Their attempts usually end up in fires spreading well beyond their property lines. Thanks to the fire brigade, most of the families have learned how and why they should schedule a controlled burn.

The other part of Jose’s job is to put out fires that are set illegally or accidentally—perhaps by a person fishing illegally who attempts to burn out an opening to a lake, or by a poacher who throws a still-lit cigarette butt on the ground.

Unfortunately, those are the fires that are most prevalent in the park nowadays. And they do the most damage in terms of polluting the air, destroying wildlife habitat, and degrading the experience tourists seek when they come to Cantão. Tourist groups traveling through the park by boat have had flecks of black soot rain down on them. The unwelcome precipitation is often from a fire within the park, although it could be from one of the many fires set just outside the park’s boundary to clear land for the soy farms that are eating away at this part of Brazil.

Jose is grateful for the income associated with the job, even though he wishes that fires were not so common in the park. Jobs are hard to come by in his hometown, Caseara, so he was glad to hear about an opening on the fire brigade in 2012. But more so, the former tomato farmer says he appreciates the opportunity to protect the park’s wildlife habitat—large trees jaguars hide behind when hunting, long branches jabiru storks perch on to find mates, and riverbanks where giant river otters build dens.

“In addition to earning a living, I am also helping to preserve nature,” Jose says. “Sometime in the future, my grandchildren might not have this here, might not be able to see it. But if I help and do my part today they might be able to see it all someday.”

He is also grateful for the equipment now available to the fire brigade: a “muffler” (a long handle with a large black flap at the end which is used to stomp out small flames), masks to protect the firefighters’ faces, backpacks that carry water tanks, and more boats, which they sometimes need in order to reach the fires. Without the ARPA for Life program, none of that—the equipment, his job, his time in nature, and his legacy to his grandchildren—would be possible.