The tree-dwelling mammal with a surprisingly familiar scent

They purr like cats. They look like small bears. But make no mistake, binturongs (also called bearcats) are neither. These timid, fuzzy-furred creatures belong to the Viverridae family—a group of mammals found only in the Eastern Hemisphere. They inhabit the tropical rain forests of Southeast Asia, spending most of their time high in tree canopies in search of food. And while they may look or act like other species, one attribute sets them apart: They smell like hot buttered popcorn. 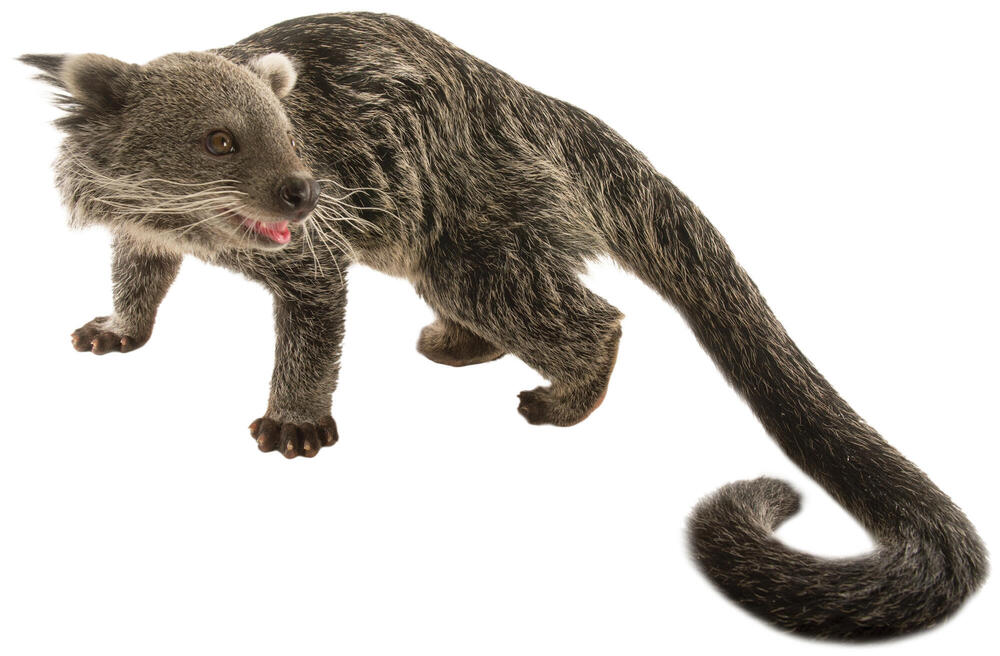 CLAWS
Sharp and semi-retractable, making the bearcat an excellent climber.

FUR
Coarse and shaggy; varies from black to brown, enabling the bearcat to blend in with its jungle surroundings.

TAIL
Prehensile, like a monkey’s, and serves as another limb when the animal is climbing; a leathery patch on the tip helps to grip branches.

Scientists once thought that the bearcat’s distinct aroma came from glands beneath its tail, but a recent study discovered that the animal’s urine contains 2-acetyl-1-pyrroline—the same chemical compound that gives the popular movie theater snack its mouthwatering smell. As naturally solitary animals, both male and female bearcats spread this strange odor on trees and leaves to mark their territory, attract mates, and tell other bearcats to stay away.

Female bearcats are about 20% larger and heavier than males and are the species’ dominant sex. They’re also one of only around 100 mammals that can delay embryo implantation, allowing them to time the birth of their young to a season when environmental conditions are most favorable.

RANGE
From Northeast India and Bangladesh to Malaysia, Borneo, and the Philippines; also found in other Southeast Asian countries, Nepal, Bhutan, and China.

STATUS
The IUCN Red List classifies the species as vulnerable, with a population decline estimated at more than 30% over the last 18 years.

THREATS
Habitat loss and degradation due to agriculture and logging; exploitation for the pet and illegal wildlife trade; hunting.