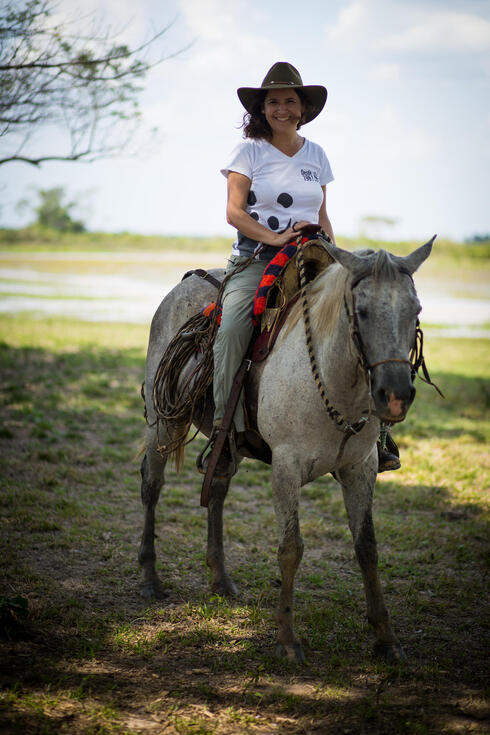 On November 30, 2016, Sandra Valenzuela was home watching television with her mother, but she wasn’t tuned in to a sitcom or movie. She was watching the local news, anxiously waiting to find out if the congressional leaders in her homeland, Colombia, would say yes to a peace agreement with the rebels who were at the center of the country’s 52-year civil war.

She had been in front of the same television set nearly two months earlier, waiting for the results from a similar referendum that had been put before the general public. She was crushed when she learned that night that the referendum was rejected. It was one of several times in her life that a peace agreement was within reach, but then failed.

The vote before Congress that night felt like the last flicker of hope. When the newscaster announced at 11 p.m. that Congress had approved the referendum, she was in shock.

“I didn’t think it could happen,” says Valenzuela, 43, who had lived her entire life in a country embroiled in conflict.

She toasted the victory, then she and her mother called her sisters in the US to rejoice. The festivities continued for several days, as parades and impromptu parties in the street took over Bogotá, where she lives. She was in the thick of it all—much as she has been in the thick of the conflict for many years.

Valenzuela has spent almost half her life dedicated to a more peaceful Colombia, and particularly to how conservation can help the country achieve that peace. She has done so wearing several hats—the first being with the Colombia National Parks Agency. During her first five years there, she put her law degree to work by helping create policies related to who owns land in Colombia and how they can use it, especially in and around protected areas—an issue at the core of the conflict.

Her next path within the agency took her as far away from a desk as possible. In 1998, the petite 20-something ended up in the Amazon, ground zero for the conflict, where she worked as the agency’s director of protected areas for the Amazon and Orinoco regions. Her task? To help negotiate agreements with local communities and the national parks agency.

“I finally have faith that we can start creating what we have wanted for so long—using our natural heritage to promote peace. Our parks are an opportunity to make peace real and provide tangible benefits to all of us.”

For three years, she traveled throughout the Amazon, sleeping in tents, cabins, and hammocks at night, and meeting with small farming communities, indigenous groups, and others during the day. They mainly met in the Macarena region of the Amazon, which the Colombian president had designated as a neutral zone. It was, in theory, a safe area where the government and rebels could go to negotiate a peace agreement. The parks agency usually convened these meetings because it was considered to be the most neutral entity around.

“We were not judgmental,” says Valenzuela. “We knew people at the meetings were growing illicit crops and affiliated with the rebel groups. It was just a fact, and we did not judge them for that. We just listened and then we provided alternatives, like sustainable livelihood opportunities that did not involve illicit crops. And we helped find new places for those displaced by the conflict to live. All of this helped us to build trust.”

But that was not enough. Three years of discussions, but no peace agreement to show for it in the end.

“We made progress,” she recalls. “We just could not get into the meat of things—the root causes of the conflict. It’s because there was not a sense of urgency.”

She eventually came out of the forest, left the agency, and completed two master’s degrees, one in international affairs and rural development, the other in science and conservation.

“I was so sad to leave the field. I was crying when I left, because I felt like I was betraying the people I had met and leaving them in the middle of the conflict.”

In reality, she never left the conflict behind. One of her theses related to financial mechanisms for the proper management of protected areas—the areas that were most affected by the conflict and, in many cases, were the source of the conflict.

And, fresh out of graduate school, she was back in the peace process again—this time as a member of WWF’s Colombia team. When she started working for WWF in 2004, she coordinated the office’s strategic planning and monitoring.

Now, with the peace agreement signed, she leads the WWF team that is helping bring to life what is seen as one of the best strategies for implementing the agreement: Heritage Colombia.

“I finally have faith that we can start creating what we have wanted for so long—using our natural heritage to promote peace. Our parks are an opportunity to make peace real and provide tangible benefits to all of us.”